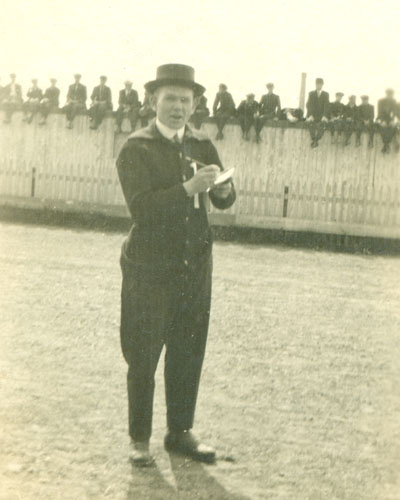 ALBION – This photograph shows Charles W. Howard playing an unusual role; that of the secretary of the Orleans County Fair Association.

Taken sometime in the late 1910s, Charlie is shown standing on the race track of the old county fairgrounds in Albion. A number of men are lined up in the background, sitting atop the fence.

Born and raised at the family homestead on the corner of Route 31 and Gaines Basin Road, his earliest years were spent partaking in household chores and working the family farm. He was active in local agricultural societies and the Orleans County Fair Association for many years.

In 1926 Howard suffered injuries to his legs after falling from the top of a silo, 20 feet to the cement ground. After taking the plunge, he was rushed to the local hospital where it was discovered that he had broken his leg and broken bones in the other foot.

Around 10 years later, he suffered another fall, this time from atop a loaded hay wagon. After resting for four days, he returned to work performing his usual farm jobs. It was nearly three weeks later that he traveled to Rochester for x-rays, only to have the doctor exclaim, “My gosh, man, you’ve got a broken neck!” His neck was placed in a cast and he quickly returned to laboring on his farm.

Both injuries would have a lasting physical effect on Charlie. Despite this, he still went on to establish his famed Santa Claus School in 1937, operate his beloved Christmas Park, and enjoy the distinction of being one of the most adored men in the world. Howard has been an inspiration for many; a man of love, charity, and kindness – a true local legend.