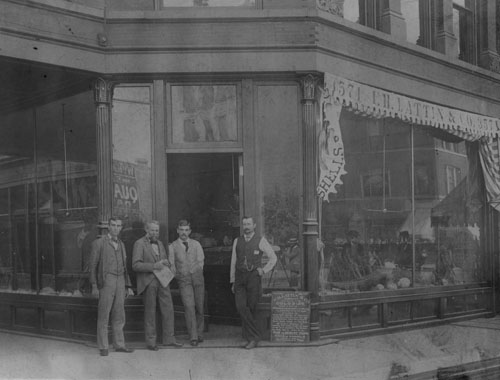 This image shows the storefront of F. H. Lattin & Company in Chicago, Ill. Although this is not an image of a building in Orleans County, Frank Haak Lattin of Gaines operated this store as one of several specializing in the sale of natural specimens, instruments and supplies.

Graduating from the Albion High School in 1882, Lattin would spend several years teaching in Gaines. Lattin recognized the rich geological nature of the Orleans County region and collected a number of specimens from neighboring sandstone and limestone quarries.

In his earliest years as a collector he focused his attention strictly on birds’ eggs and started a publication called the “Oologist” in 1884. That collection of eggs became so extensive that it occupied two warehouses and at one time pieces of the collection were placed on exhibit at the Field Museum in Chicago.

By the time of his retirement in 1896, he was regarded as one of the most well known dealers of his kind in the United States. He would later attend the University of Buffalo, graduating from the medical department in 1899.

Lattin also became a well-respected fruit grower throughout New York State with over 200 acres of land dedicated to the growing of pears, cherries, peaches, plums and apples in both Orleans and Oswego counties.

At the time of this photograph, Lattin was heavily engaged in the wholesale and retail business, selling specimens, instruments, supplies and publications for the naturalist. The careful eye can catch a glimpse of the variety of specimens within the storefront.