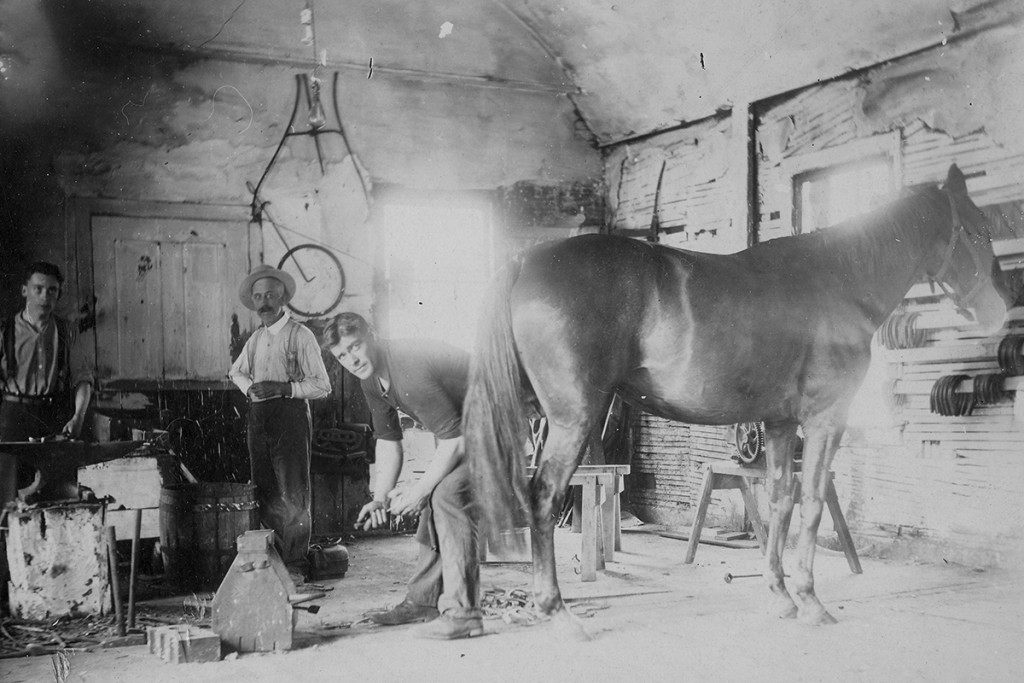 This photograph taken in June of 1907 shows the interior of Nelson N. King’s Blacksmith Shop located at Shelby Center. A native of Newfane, King started his blacksmithing career in Orleans County working with Maxim “Peter” Pilon at Carlton Station.

In July of 1900, Pilon sold his shop and all of the associated tools to King who assumed control of the business shortly after. On June 27, 1903 King married Lillian Ryan at Shelby and started to rent the Bailey Blacksmith Shop at Shelby Center in late October of 1904.

Nelson King is bent over with the horse’s hind leg positioned between his own legs preparing the hoof for shoeing. On the left, Pierson “Syke” Neal is shown working a horseshoe on the anvil while Adra Wormuth, a local farmer, observes.

Blacksmiths wore aprons to cover their clothing, protecting them from sparks created by the pounding of heated metal. The only man in the photograph not wearing an apron is Wormuth, which suggests that he brought the horse to the shop for shoeing.

This shop is particularly unusual given the amount of light inside of the room. Blacksmith shops were often dark, allowing the smith to observe the changing colors of the metal. Different colors represented different temperatures and depending on the intended final product, a combination of specific temperatures and tools were required.

Scattered across the floor are a number of this tools including tongs and sledgehammers. Hanging on the wall next to the door is a rake used for working the fire in the forge, which was likely off to the left of Neal’s anvil.