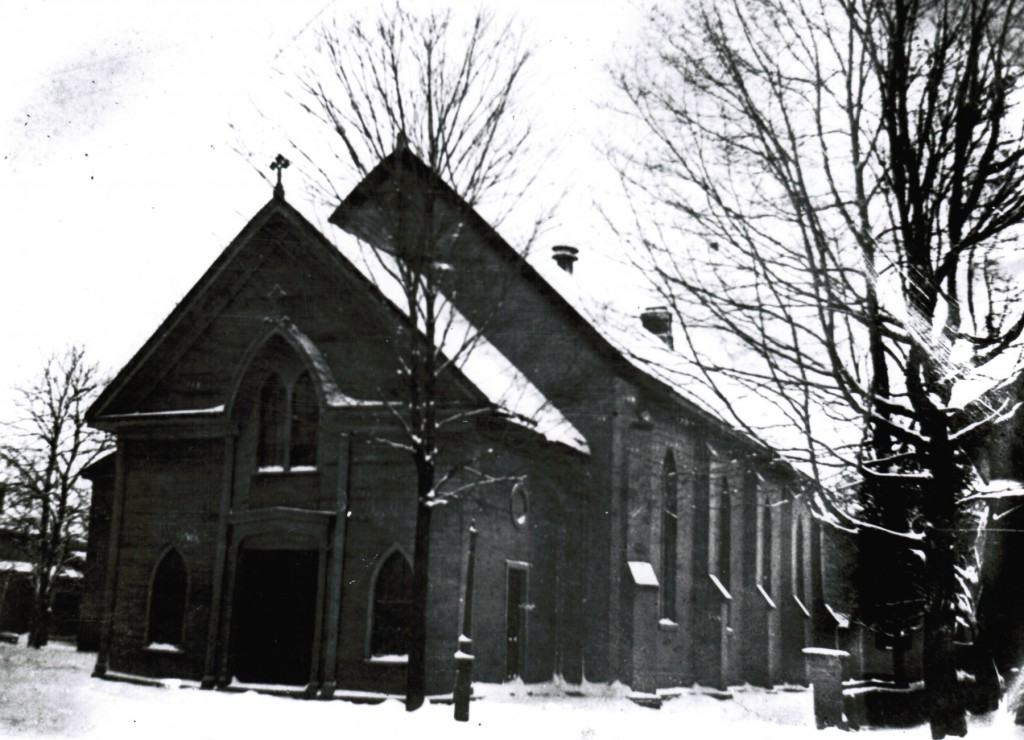 Irish Catholic immigrants flocked to Orleans County as early as the 1820s and 1830s, well in advance of the Great Famine of 1845-1852. The Irish in Albion and Medina quickly found work within the newly established sandstone quarries located throughout the region, yet no house of worship existed to meet their weekly sacramental requirements.

Around 1840 Rev. Patrick Costello of Lockport visited Albion to celebrate Mass in the home of John Walsh, an early Irish settler in the village. The earliest Irish population was small, consisting of the families of Samuel McCaffrey, Denis Sullivan, Patrick McMahon, Bernard Flaherty, Thomas Crean, and Felix McCann, the latter a veteran of the Battle of Waterloo. The community rented space in the Burrows Block on Main Street and priests held monthly services from Lockport or Rochester. These priests were also called upon to administer the sacraments of baptism and matrimony.

In June of 1849 Bishop John Timon visited Albion with Rev. Harmon of Medina in order to secure the site on North Main Street. Work began soon after and the edifice was completed in 1852 under the direction of Rev. O’Conner; the first Mass was celebrated on Palm Sunday of that year. Over the next ten years, the congregation saw numerous priests come and go until Rev. John M. Castaldi arrived in 1862. His tenure with the parish would be one of the longest in the history of the congregation.

Castaldi ensured the continued growth of the parish with the erection of a parochial school located behind the church, opening in 1869 under the direction of the Sisters of Mercy. He also secured 26 acres of land located on Brown Street for use as a Catholic cemetery, then called “Holy Sepulchre.” Two years later, the parish purchased the property of Mrs. English for use as a convent for the Sisters. This growth and the size of the congregation elevated the parish to the rank of “Irremovable Rectorship,” meaning the priest left only by retirement or death. It was the death of Rev. Castaldi in 1895 that led to the erection of the new sandstone church on Park Street; another story for another time.

This image shows the original site of St. Joseph’s Catholic Church, located between Erie Street and Caroline Street. Unlike the current edifice, this church was constructed of wood and was likely meant to serve as a temporary house of worship. Those familiar with St. Mary’s Assumption Parish in Albion will notice some similarities between this structure and the Polish parish building. Both the interior and exterior of the Polish church resemble the original St. Joseph edifice.

The Department of History is now seeking submissions for the inaugural edition of “The Pioneer Record.” Check out www.orleanscountyhistorian.org for more information.