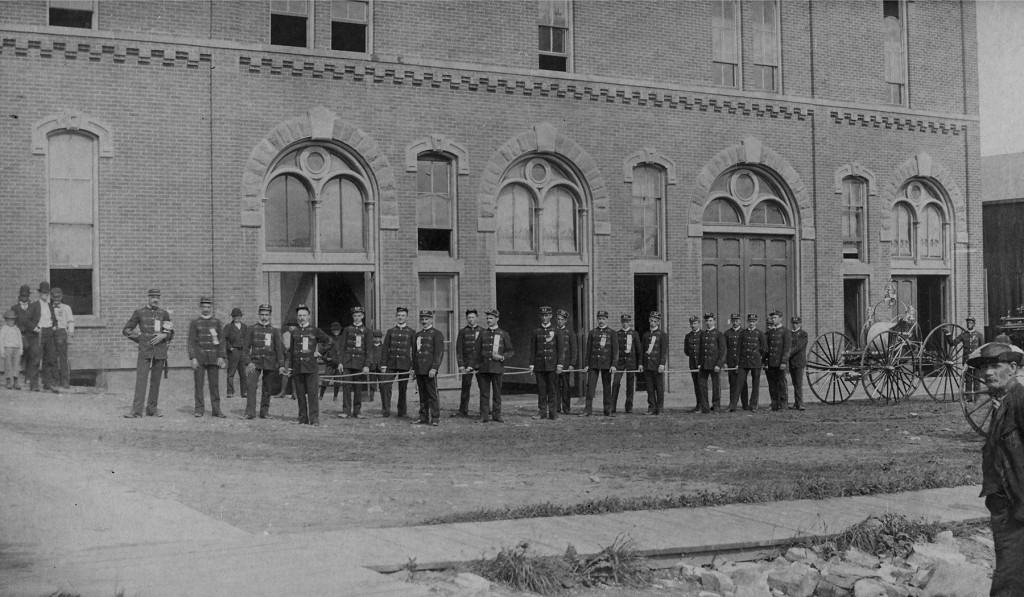 Formed amidst the vast wilderness that was Upstate New York, Albion was built within dense old-growth forests that covered the region. The untouched and uncultivated land proved to be both dangerous and threatening for early settlers.

Wooded regions were filled with deadly animals that have gone unseen in this area for decades, but the most deadly threat to early settlement was fire.

Dating back to 1829, Albion’s earliest protection against the threat of fire was prevention. Fire wardens sought to eliminate dangerous scenarios that often led to devastating disasters, yet for those occasions where the inevitable fire broke out, the bucket brigade became the last defense against these deadly occurrences.

Between 1831 and 1880, Albion witnessed the development and transformation of the area’s fire fighting force from the establishment of a rudimentary group of young men to the creation of a well-developed and complex system of multiple fire companies.

The earliest fire garage was situated on North Main Street at the site of Gurney’s Old Coach Inn, then adjacent to the Village Hall. On Nov. 14, 1874 the new Village Hall was constructed on the northwest corner of East Bank and Platt Streets. On the second floor, the building contained a large auditorium for meetings and entertainment while the first floor contained village offices and space for the storage of fire apparatus.

It was during this time that Village of Albion President William B. Dye took an active interest in the establishment of a new fire company – Dye Hose Company No. 5. Under the direction of George W. O. Shourds as temporary chairman, Robert Beach was selected as President and W. Lettis as foreman of the organization with approximately ten charter members. George Shourds and Morgan A. McLean were the last two surviving charter members when the organization celebrated its 50th anniversary in 1932.

The company was formed the week ending on May 28, 1881 and the group participated in their first practice at the Orleans County Fairgrounds on July 19, 1881. Adler, Dye & Company furnished the new uniforms, which consisted of blue coats, white shirts, white caps, and white pants lined with red trim. On their second anniversary in May of 1883, the Village of Albion Trustees purchased a new four-wheeled hose cart for the company at a cost of $500.

In this image, you will see Dye Hose Company No. 5 lining up for a parade on July 4, 1889 in front of the present Village of Albion Police Station. The building originally served as a garage for fire apparatus and the original doors and many windows have since been bricked over.

It is presumed that the hose cart in tow is the original cart purchased for the company in 1883. This photograph was taken from the northeast corner of Platt and East Bank Streets looking northwest – notice the boardwalk situated along the dirt streets.

This piece originally appeared as part of the Revisiting Old Orleans series at www.orleanscountyhistorian.org.