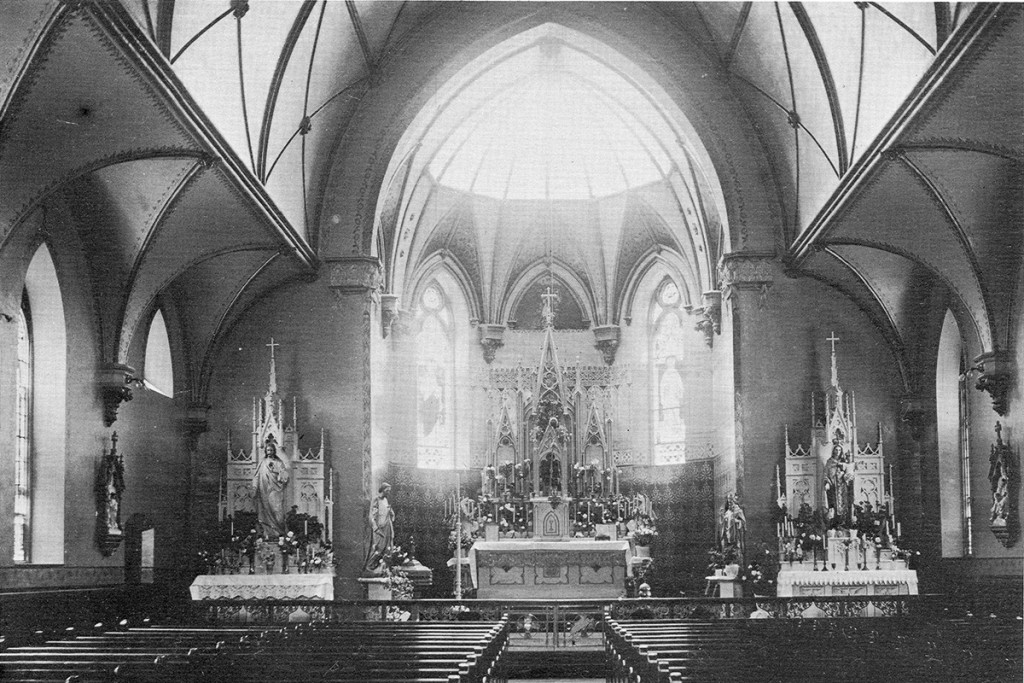 As the parishioners of St. Mary’s Church in Holley prepare to celebrate the 150th anniversary of the establishment of their parish, it is also worth noting that the physical building will celebrate its 110th birthday this December. Taken prior to 1939, this image shows the interior of St. Mary’s Church as it would have appeared shortly after the dedication of the building in 1905.

The Catholic population of Holley first celebrated Mass around 1850 when Revs. Donnelly and O’Laughlin of Brockport ministered to the inhabitants of the region. Services were held at the old stone school located on the corner of Main and Albion Streets and then at the home of Fenton Whalen until a site on Canal Street was purchased from John Connery. It was under the direction of Rev. John Castaldi that the old frame church was erected on this site and the Holy Cross Cemetery purchased.

The subsequent pastorates of Revs. David Lasher, James Lasher, Patrick Maloy, James Leddy, and Michael Noonan left the parish in a stable financial state. Upon the arrival of Rev. James McCarthy in 1902, the focus of the congregation shifted towards the construction of a new church edifice upon a site selected by Rev. Noonan. A native of Albion, McCarthy studied at St. Bonaventure and then in Italy before his ordination as a priest in the Diocese of Buffalo in 1885.

Constructed of Medina Sandstone quarried from Orleans County, the interior of the structure contained beautiful vaulted ceilings painted pure white. The Georgia pine wainscoting and dark oak pews provided a striking contrast. The image shows the Gothic altar, finished in white and gold and the four statues that adorned the side altars; the Sacred Heart, St. Joseph, St. Patrick, and the Virgin Mary.

The north and south walls contained nine stained glass windows in addition to the two pictured in the chancel of the Sacred Heart of Jesus and the Sacred Heart of Mary. A set of fourteen Gothic Stations of the Cross donated by local quarry owner Richard O’Brien were situated between the windows. The most stunning feature of the church interior was the dome of amber glass situated over the altar.

On December 24, 1905 Bishop Charles Colton arrived at Holley with a gathering of priests from Western New York to dedicate the church. Due to a delay in delivery, the altar rail, electric lighting, and other minor fixtures were not installed in time for the dedication ceremonies.

The interior bears a striking resemblance to those of the old St. Mary’s Assumption Church and St. Joseph’s Church in Albion, the latter also containing a beautiful dome of amber glass.