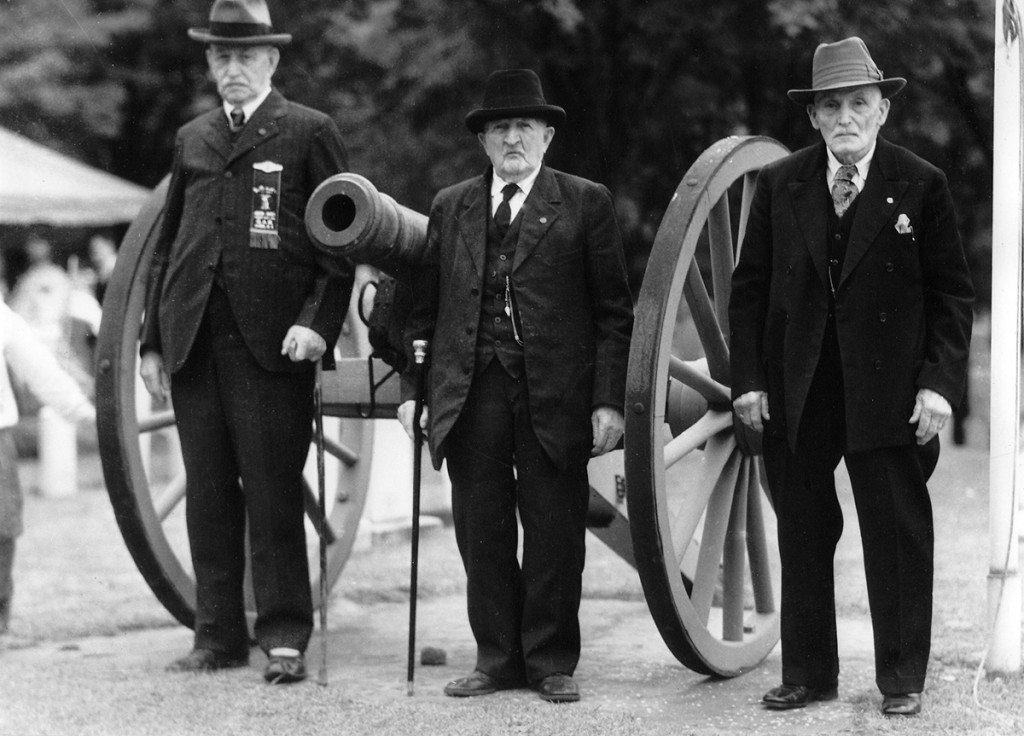 Standing left is Robert Canham proudly wearing his Grand Army of the Republic ribbon. A native of England, Canham came to the U.S. at age 14 with his family and enlisted with the 3rd U.S. Artillery for three years before reenlisting with the 90th New York Infantry. At the time of his death in 1838, he was the last surviving Union veteran in this county at the age of 100.

In the middle is Henry Stockton. Also a native of England, Stockton enlisted with Orleans County’s 17th New York Independent Light Artillery for the final year of the war. He often told newspaper reporters that he was present at Gettysburg even though the regiment was formed nearly eight months after the battle.

On the right is Andrew Martin Wheeler Hall, one of the few Confederate veterans buried in Orleans County (Gov. Rufus Bullock accepted a commission as a lieutenant colonel in Georgia). At the age of 18 he enlisted with the 6th South Carolina Infantry and claimed to serve as Gen. Robert E. Lee’s “mounted orderly.” Hall’s father was allegedly killed at the 2nd Battle of Bull Run and Andrew claimed to have served at Gettysburg despite the fact that his regiment was never there. He died in 1945 at the ripe old age of 102.

The men are standing in the Civil War veteran section at Mt. Albion Cemetery located south of the western gate. The cannon still stands at this site; an M1841 6-pounder bronze howitzer cast by the N.P. Ames Foundry at Springfield, Massachusetts in 1841. Capt. William Maynadier, ordinance captain at the Pikesville, Maryland Arsenal inspected the piece and his initials are stamped into the breech.

The number “803” is also stamped into the breech, denoting that the cannon itself weighs approximately 803 pounds. These were the preferred artillery pieces during the Mexican War but were deemed obsolete by the outbreak of the Civil War. A desperate Confederate Army would have found these particularly useful.

The Curtis Post Grand Army of the Republic dedicated this canon and thirty-foot flag pole on May 28, 1885.