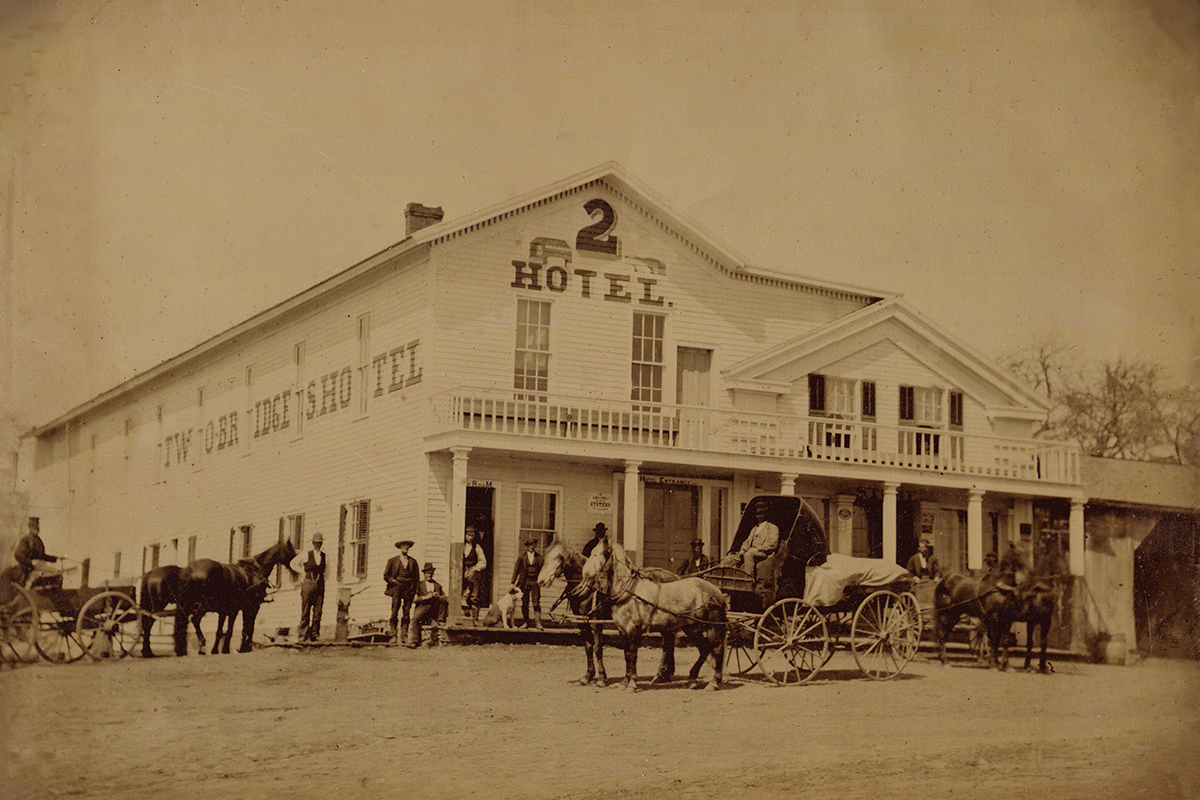 This image shows the old “Two Bridges Hotel” located in Carlton near the Oak Orchard River and Marsh Creek. Residents of the area may recognize this building as it stands today as “Narby’s Superette and Tackle.”

The hotel area of the structure was located on the west end. Two doors are located on the front end of the building, one marked “Bar Room” and the other marked “Hotel Entrance.” A sign outside of the main doorway shows that oysters were being offered in the dining room.

Along the west side of the building, “Two Bridges Hotel” is painted between the windows on the second floor and the name of the hotel is again depicted at the peak of the building on the front side. The two bridges that gave the area its name are shown; the covered bridge spanning the Oak Orchard River and the bridge crossing Marsh Creek.

Located on the east end was the general store and postmaster’s office. Prior to the advent of rural delivery, Carlton’s post office was located at this site. Further to the east was a stable for horses. These two pieces were later removed.

The earliest hotel on this site was a brick structure built prior to 1870. When that building burned, this structure replaced it. The hotel had a long list of proprietors starting with R. R. Tenant in its earliest years and later falling under the ownership of Whaley & Palmer, Wyland & King, George Gunther, George Root, Ashley Blake, Philip Podgers, Charles Conley, and Benjamin Bamber.

The store also had a lengthy list of owners who often doubled as postmaster during their tenure. Benjamin Fowler, who was likely the owner of the store when this photo was taken, and James Waldron were two of the earlier proprietors of the business before Ben Bamber took control.

The hotel was the center of community events during its heyday. Proprietors frequently held parties for New Year’s Eve, Washington’s Birthday, Independence Day, and other patriotic celebrations. The store was one of the few local spots where residents could purchase dry goods and other necessities such as medicines.