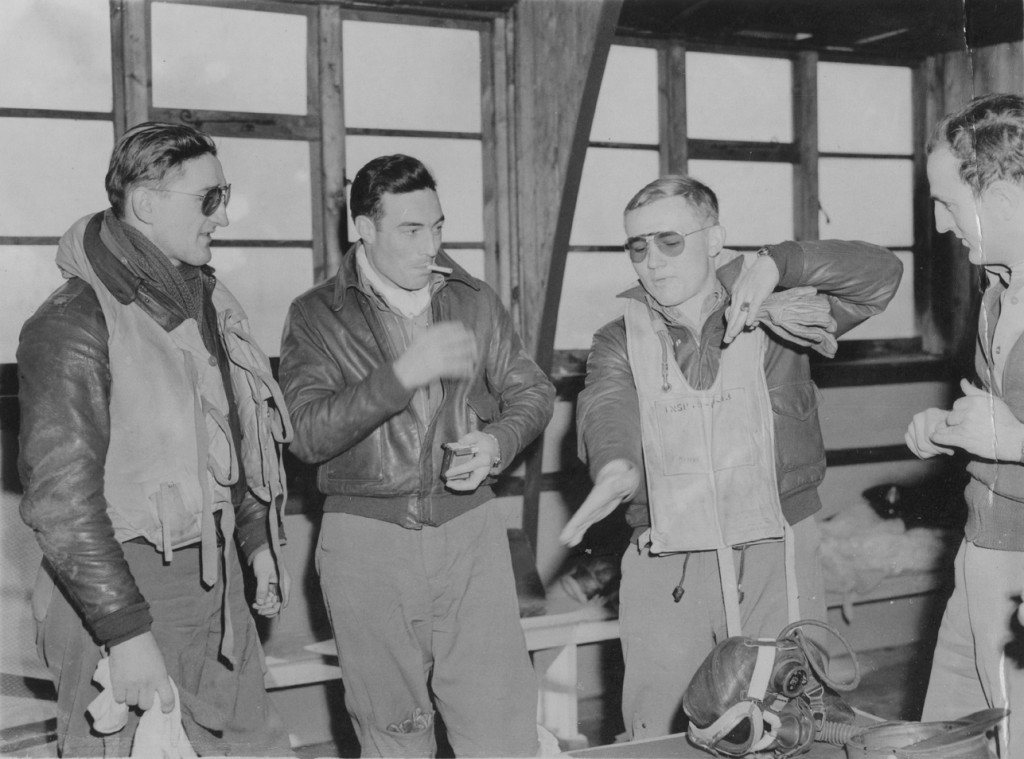 This image, courtesy of the American Air Museum in Britain, shows Capt. Eugene E. Barnum of Gaines discussing the actions of his latest mission at Halesworth Airfield in Suffolk, England. The exact date of the image is unknown, but was passed for publication on November 26, 1943. Standing left to right is Lt. Col. Francis “Gabby” Gabreski, Lt. Eugene Barnum, and Lt. Frank Klibbe. Gabreski was shot down over Germany on July 20, 1944 and spent five days imprisoned in Stalag Luft I near Barth, Germany. Klibbe died on January 27, 1944 during a flight test when the engine of his P-47D failed.

Barnum, a native of Gaines, was placed with the 61st Fighter Squadron of the 56th Fighter Group stationed in Britain. While flying with the 56th Fighter Group, Barnum became the preferred wingman of “Gabby” Gabreski until December 2, 1944. It was during a “Ramrod Mission” (short range attack on ground targets) that Capt. Barnum was charged with sweeping the airspace in advance of U.S. bombers heading towards Cologne and Frankfurt in Germany. While engaged with the enemy, Barnum’s plane collided with Lt. Wyman Baker, sending both planes to the ground over Dorf-Gull, Germany. Both men perished in the crash.

Barnum was awarded the Distinguished Flying Cross with Oak Leaf Cluster for his actions during several missions in the summer of 1944. He was credited with two confirmed kills and was responsible for confirming the 27th kill of Capt. Robert Johnson, the World War II ace that surpassed Eddie Rickenbacker’s World War I total of 26.

“P.T.” or “Pete,” as he was often called, was the second son of Eugene and Florence Barnum to sacrifice his life in service with the U.S. Armed Forces. In July of 1944, Lt. William Barnum was killed while serving with the 9th U.S. Army Infantry during the Allied breakout from Normandy. While the Allies prepared to sail across the English Channel, William tried one last time to visit his brother at Halesworth Airfield. Unfortunately, Eugene was on a mission and did not learn of the visit until after William’s death on July 16th.

The deaths of both Barnum boys was a devastating loss to the family back home and was felt by community members throughout Orleans County. Eugene and William were laid to rest in the American Cemetery in Margraten, Netherlands – cenotaphs are arranged in the family lot at Mt. Albion Cemetery, representing the final resting places of the two brothers. With the passing of Veterans Day, we hope that no one ever experiences such a loss, but thank all servicemen and women who have the courage to serve our nation.