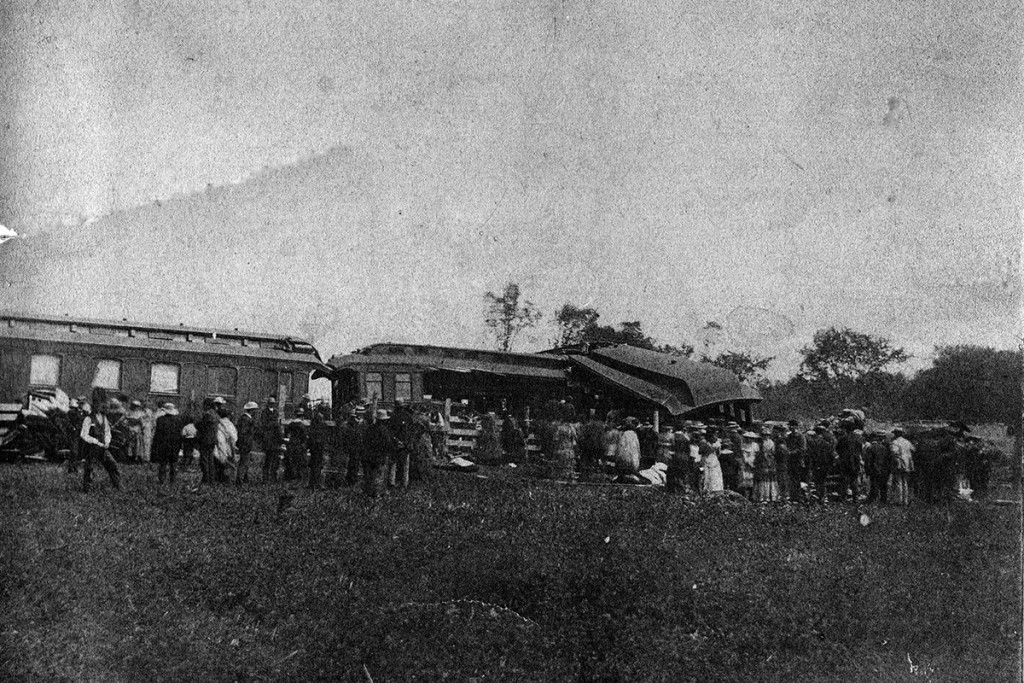 This image, taken the morning after the accident occurred, shows the crowds gathered at the wreckage of the Steamboat Express. Nearby residents assisted in pulling corpses and wounded passengers from the wreckage into the early morning.

At 9:48p.m. July 27, 1883, Orleans County experienced one of the most devastating disasters in local history. The excursion train “Steamboat Express” was traveling eastbound on the Rome, Watertown, and Ogdensburg Railroad with a load of passengers bound for the Thousand Islands. On this particular evening a terrible storm had developed in the region bringing rain, lightening, and terrible gusts of wind.

The train departed the Lewiston station approximately 20 minutes behind schedule, departed Lyndonville’s station nearly 30 minutes behind schedule, and then proceeded on the four mile journey to Carlyon’s station. The train reached speeds of 25 miles per hour, normal pace for fair weather travels, and progress was on schedule despite the delay in departures from the previous two stops. As the engine steamed past the station at Carlyon, Fireman McCarthy opened the furnace door to feed the fire; the flash of light from the fire temporarily blinded Boynton.

As the engineer regained his sight, the vision of a stationary freight car appeared just a short distance in front of the engine. Boynton threw down the brakes and placed the engine in reverse but to no avail. With a full head of steam, the passenger train slammed into the freight car positioned on the main track. The engine rolled on its side, throwing the engineer and fireman around in the cab. The heavy sleeper cars at the rear of the train pressed the light passenger cars into the engine, smashing them to pieces, and pinning passengers throughout the wreckage.

The terrible noise attracted a large crowd to the scene of the wreckage. Dr. Samuel Cochrane of Albion was dispatched to the scene as coroner and the station’s depot was temporarily turned into a triage center for wounded passengers. The mangled corpses of 17 individuals were pulled from the wreckage that night and laid out on the station platform. The grotesque and devastating nature of the tragedy was something that local residents would recall for decades to come. Newspapers throughout New York, Pennsylvania, and Michigan covered the story, highlighting gross negligence on behalf of the RW&O Railroad.

Following the disaster, Carlyon’s Station Agent W. A. Barry fell under heavy scrutiny for the events of that evening. It was his responsibility to have the freight car moved from the main track to a section of track adjacent to the main line. Barry insisted that he relocated the car and firmly set the brake. Investigators scoffed at the idea that even the most violent of wind gusts could blow a freight car with an engaged brake over 185 feet onto the main track. The coroner’s inquisition gathered testimony from Alfred Perry, the track watcher that evening, who claimed that just 30 minutes before the train came through, the track was clear of any obstructions.

There was no resolution to the question of who was responsible for the wreck. Barry insisted that he was not negligent in failing to set the brake on the car, instead suggesting that a group of malicious persons pushed the car onto the track. The wreck attracted attention for years following the incident and appeared in newspapers throughout New York even fifty years later. Numerous individuals and family members of deceased passengers initiated civil suits against the RW&O Railroad, claiming that their loved ones were stripped of personal belongings, money, and one family cited the company’s refusal to allow for an open casket identification of the body.

Note: The Carlyon railroad station was located on Yates-Carlton Townline Road between Ashwood and Alps Roads. The hamlet’s name was later changed to Ashwood.