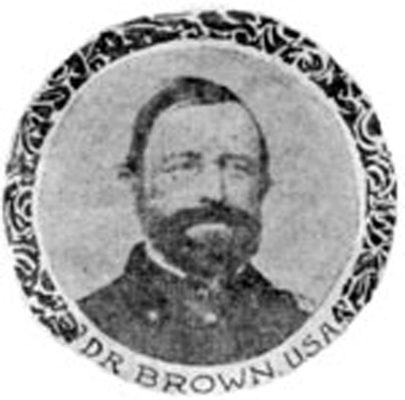 Image courtesy of The Fort Dalles Museum in Oregon

Born July 26, 1822 at Albany, New York to Rufus and Margaret Bullock Brown, Joseph Lee Bullock Brown received his early education in the Albany area. He later attended the Albany Medical College where he graduated from that institution, likely in the early 1840s and shortly after the establishment of the school in 1839.

Appointed physician at Clinton Prison in 1845, the year after the institution was established, Dr. Brown remained in that position for nearly three years before he removed to Detroit, Michigan to practice surgery.

In 1849, he received an appointment as a surgeon with the U.S. Regular Army and received a commission as Assistant Surgeon from Zachary Taylor the following year. Stationed at Ft. Dalles in the Oregon Territory, Dr. Brown also served in Texas and the Washington Territory up until the start of the Civil War.

After war broke out, Brown was ordered to return to east and was assigned to the Army of the Potomac under the command of General McClellan. Commissioned as a Surgeon with the rank of Major by President Lincoln on July 4, 1861, Brown remained in service until he was assigned as Medical Director of the 4th Corps, Army of the Potomac. After authoring a report on medical care which was later published in the Medical and Surgical History of the War of the Rebellion, he was reassigned to the Assistant Surgeon General’s Office at St. Louis and then at Louisville, Kentucky. He was active in a number of Indian campaigns throughout the course of the war.

Near the conclusion of the war he was brevetted Lieutenant-Colonel for his service and after treating patients during a cholera epidemic at Ft. Columbus in New York Harbor, he was brevetted to Brigadier General. From that point on, he was known as Gen. Brown and spent thirteen more years in service with the U.S. Army as president of the Medical Examining Board in New York City and Medical Director at the Department of the Platte, a region which then contained the territories of Iowa, Idaho, Nebraska, the Dakotas, and Utah.

At the age of 64 in 1886, Gen. Brown retired from service and lived for a short period at Tarrytown-on-the-Hudson before removing to Albion in 1887 where he lived out the rest of his life at the Bullock Homestead on Liberty and W. Park Streets. After serving over three decades with the U.S. Army, Gen. Brown dedicated his life to the study of the classics and photography. He died on October 21, 1891 at his home in Albion and is interred at Mt. Albion Cemetery.

Note: Gen. Brown’s brother, Judge Robert Hewitt Brown, was a well-respected attorney and author of “Stellar Theology and Masonic Astronomy,” who later served as counsel for Rufus Brown Bullock during the investigation into his service as Governor of the State of Georgia. Gov. Bullock and Gen. Brown were first cousins; Bullock’s father, Volkert Veeder Bullock being the brother of Brown’s mother, Margaret Bullock Brown.