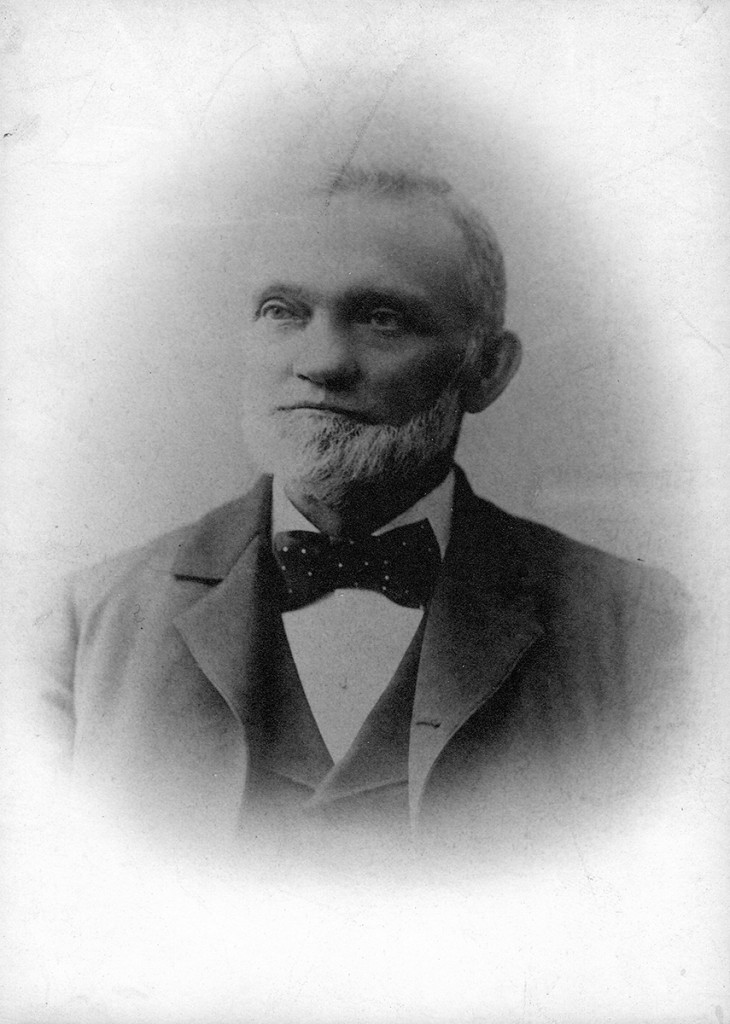 George W. Ough, pronounced “Uff”, was born on February 12, 1827 at Cherry Valley, New York. As a child, he worked on the family farm in Otsego County until he reached the age of fourteen, when he moved north to Fort Plain, New York to work as a store clerk. Following a short stay in Lockport, Ough later moved to Albion where he operated a crockery store, which he later sold to purchase the furniture business formerly owned by George M. Pullman. His eldest daughter, Jennie, later married Cassius M. C. Reynolds who would eventually take over the business located in the Ough Block on North Main Street.

By the late 1890s, Ough had the distinction of being one of the longest tenured members of the Albion Board of Education, of which he was a founding member. After he was elected to his first term as President of the Village of Albion, he resigned his position on the Board of Education. Following his second term as Village President, he moved into a position as assessor for Albion.

His time in office was brief, remaining in the position for two terms. Ough was active in numerous local organizations serving as a member of the Swan Library Association and Chief Engineer of Albion’s Fire Department. Following years of public service, he retired to a large farm located in Kent, one that was regarded as one of the best orchards in the Western New York fruit belt. He was also active in horse racing, quite frequently leasing the race track at the county fairgrounds.

After a contested horse race in 1900, Fred Parker of Elba and the National Trotting Association brought a suit against Ough and his bay gelding Doctor H. Parker claimed that Ough purchased the respected racehorse Tally-Ho from Michigan and changed its name to disguise the horse’s race times. The Trotting Association determined that Doctor H was in fact Tally-Ho and that Ough’s winnings, totaling over $200, should be forfeited. In addition to this forfeiture, Ough was suspended until he paid for an official change of name.

Ough’s unscrupulous practice with horseracing was not his first questionable scandal. In the mid-1880s papers across New York ran front-page news about an absolute divorce suit filed against Annie Ough by her husband. Wed in 1875, George had his eyes set on Annie Cummings, a youthful and wealthy widow from Shelby. The honeymoon phase was short-lived and issues began to surface in the relationship. Annie stated that George demanded immediate control over the wealth from her previous marriage. When she refused, she claimed that he forced her and their daughter Georgia out of the home. Naturally, George asserted that this was untrue and that his wife was adulterous in their marriage.

When news broke that Ough named several prominent men from Albion and Medina as co-respondents in the suit (men he claimed his wife had extramarital affairs with), the story spread like wildfire and “scandal-mongers” throughout the county took to spreading gossip about the couple. Among those named in the suit were the prominent entrepreneur and land owner, Charles H. Moore of Albion, proprietor of the Albion House, Marvin Warner, and the prominent and well-respected Medina attorney, Stanley Filkins.

The case was one of the first for the newly seated Judge Lambert. Represented by Hon. John Hull White, president of the Albion Board of Education, the case was delayed on numerous occasions until the judge finally issued a nonsuit, which Ough quickly appealed. Annie Ough was assisted in her defense by Stanley Filkins, the same man named by Ough in the original suit. The accusations were so damaging that Filkins’ own wife filed for divorce shortly after the case hit the papers.

Despite this scandalous dispute, Ough was regarded as one of Albion’s most prominent and well-respected citizens.