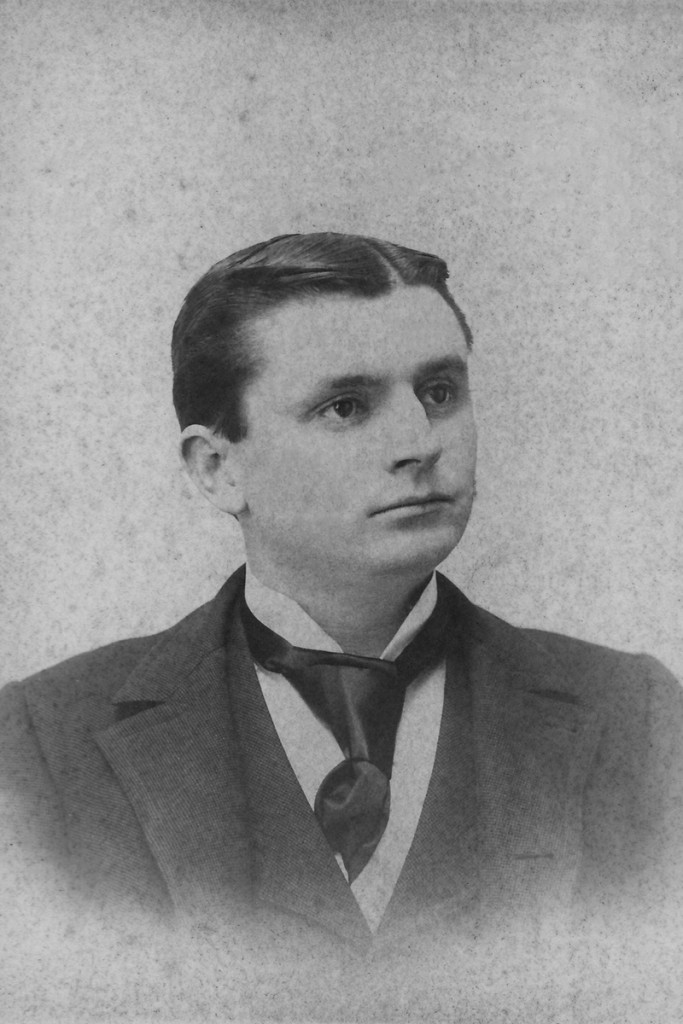 I received a few calls and inquiries about Thomas A. Kirby following the recent news article highlighting newly established scholarships through the Albion Central School District – who was he and why a scholarship in his name? Albion Council #1330 Knights of Columbus developed an annual memorial award for a deserving graduating senior who showed commitment and service to the community. This image shows Thomas A. Kirby as a young man, a freshly minted lawyer eager to establish a local partnership in Albion. The photograph is paired in the collection with that of Thomas L. Hughes.

Thomas Kirby was born on March 22, 1869 in Albion to John and Catherine Hayes Kirby. As a young man, he was no stranger to patriotic duty and service to the community. Undoubtedly a young Thomas would have heard the stories told by his father, who served with the 8th New York Cavalry during the Civil War, was taken prisoner at Gettysburg, and sent to Andersonville Prison Camp. He received his earliest education in the common schools of Albion and took an interest in law at a young age, studying with John Cunneen who would later serve one term as New York State Attorney General.

A flourishing partnership developed between Kirby and Thomas L. Hughes and the two practiced law together until Hughes decided to move to New York City. The relocation forced Kirby to practice on his own, maintaining an office on East Bank Street.

As an Irish Catholic, Kirby was dedicated to the church committee serving as a trustee of St. Joseph’s Church for a number of years. He was active in the local branch of the Catholic Mutual Benefit Association in its earliest years during the 1880s, an organization largely responsible for supporting working Catholic men with life insurance during times of economic hardship, personal injury, and death. For reasons unknown, the C.M.B.A. branch eventually developed into the Knights of Columbus Albion Council #1330 which focused its efforts on similar endeavors. The respected community member was selected as the organization’s first Grand Knight (president) when the council formed in 1908.

As a prominent member of the Republican Party and members of the New York State Bar Association, Kirby was elected for one term as Orleans County District Attorney from 1899-1901. During the famed trial of Charles Stielow, Kirby assisted the District Attorney with the prosecution of Stielow for the murder of Charles Phelps of Shelby, a role that created a heavy criticism of local officials involved in the case. He was instrumental in establishing the Albion Chapter of the American Red Cross during the First World War, acting as the organization’s first Vice-chairman. He was the attorney for the Village of Albion and President of the Board of Education at the time of his death on January 29, 1922.

As an exceptional trial lawyer, Kirby developed a reputation throughout Orleans County and across Western New York as an outstanding and prominent orator. In Carl Carmer’s book, “Dark Trees to the Wind” published in 1949, Carmer recalls a Fourth of July celebration in Albion where “…the Town’s lawyer-orator, corpulent and elegant in his best blue suit and white waistcoat, stood on the platform and with calculated deliberation began his patriotic oration. Twenty minutes later his rich deep voice was pouring out his devotion to his country and his flag with all the poetry and rhetoric born in his Irish soul. His audience was spellbound…” It is without a doubt that Carmer was writing of Thomas Kirby.

His obituary concluded, “Thomas A. Kirby always stood for the right as he saw it and was fearless in his denunciation of wrong…Faithful in every trust reposed in him…” The Knights of Columbus chose to honor a man who was well respected within their organization and a man who was held in high regard throughout the community for his commitment to service and patriotism.