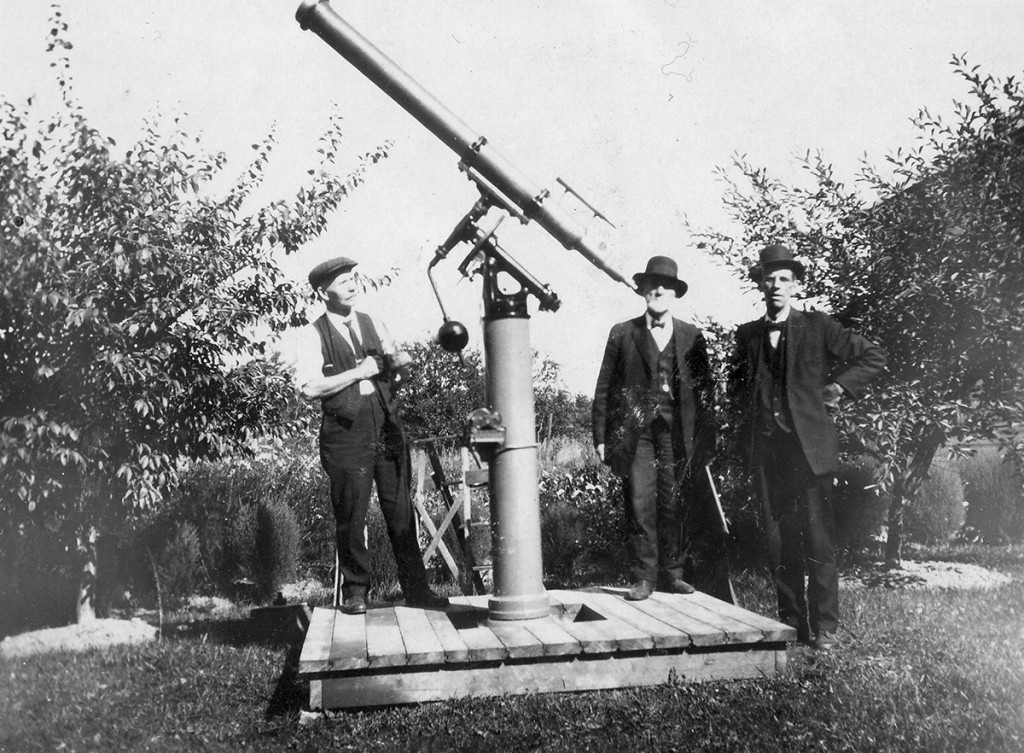 This picture, taken sometime around 1920, shows Weston Wetherbee standing with his homemade telescope behind his home on Ingersoll Street in Albion. Also pictured is Wilbur Phillips (left) and John Gilmore (center).

Weston Wetherbee was born January 24, 1857 at Barre, NY to Weston and Mary Ann Wetherbee. In his earliest years, Weston was employed as a carpenter and became proficient in the construction of windmills. During the later portion of the 19th century, Wetherbee continued his work as a windmill salesman and mechanic.

It was during this period of time that he served as a Justice of the Peace and Barre Town Supervisor. During his time in Barre politics he served as Chairman of the County Board of Supervisors. He was elected to the position of Orleans County Sheriff in 1904, a position which he held for three terms. It was around this time that Weston and his wife, Julia Goff, moved to the Village of Albion to their home on Ingersoll Street.

Wetherbee was particularly fond of astronomy, a hobby that he was heavily engaged in. Starting in 1897 he became a frequent contributor to the magazine Popular Astronomy where he took an initial interest in fireballs. The following year, Weston began charting Leonid meteors eventually leading to his efforts in 1905 to chart the path of August’s Perseid meteors with assistance from his wife.

To accomplish these feats of amateur astronomy, Wetherbee relied on his 8.5 inch reflecting telescope manufactured by Brashear. It was later in his career that he constructed a custom telescope using a 5 inch refracting lens, which he placed in a homemade observatory in his back yard. The small shed was constructed so that a rope could retract the ceiling, giving the telescope full range of view across the horizon.

When the Society for Practical Astronomy was formed, Wetherbee volunteered to lead the section dedicated to comets. It was this interest that led him to independently discover two comets previously unnamed. Unfortunately, before he could receive proper credit, other astronomers had submitted notice of the discoveries and received the recognition.

Weston Wetherbee was a rather eccentric individual at times. After the passing of his faithful horse, he dug a grave and held a funeral in honor of the animal. Delivering a beautiful oration on behalf of his dearly departed friend, he concluded the service by covering the grave with flowers. Whether he carried through with purchasing a monument for the horse, no one knows. He was also known locally for fitting light trucks with tables, folding chairs, cots, and other devices for camping trips.