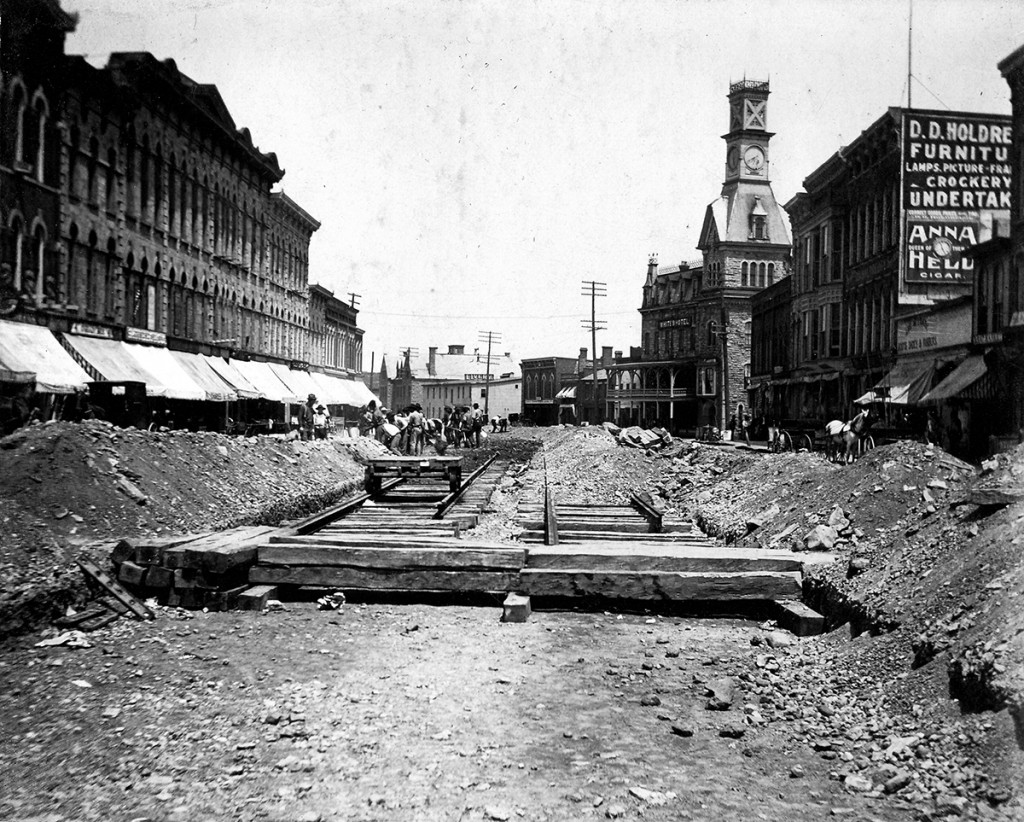 This image shows the construction of the Buffalo, Lockport & Rochester Railway through Medina in 1908. Looking north, workers are in the process of laying tracks on Main Street towards Commercial Street where the rail line would turn west and run to Salt Works Road. The iconic clock tower of White’s Hotel can be seen in the background as well as a large advertisement for Daniel D. Holdredge’s crockery and undertaking business.

The earliest efforts to construct an electric interurban railway through this area started around the turn of the century. Discussion of forming a railway that ran from Batavia to Olcott through Medina were amongst the very first plans for a trolley system. However, the 1.7 mile Albion Electric Railway was the only successful line in these early years.

Chartered in 1905, the Buffalo, Lockport & Rochester Railway was a combination of the Albion & Lockport Railway, the Albion & Rochester Railway, and the Albion Electric Railway. The company was organized by Woods and Nicholls of Toronto and there was talk that the formulation of such a railway would lead to a connection between Canada and Western New York. By September 3, 1908 the section spanning from Rochester to a point west of Albion was in full operation and two months later, on November 17th, tracks were finished to Lockport. Based on that timeline, we can surmise that this photograph was taken sometime between September 3rd and November 17th of 1908.

With stations located at Medina, Knowlesville, Albion, Hulberton, and Holley, the trolley tracks ran down East Center Street, turned north on Main Street to Commercial Street and ran north of Medina’s residential neighborhoods. While the company was in the initial stages of planning the railway’s route, Medina residents were vocal in their opposition to tracks running in front of their homes. Despite this opposition and the eventual rerouting of the rail line, Medina residents could enjoy a trip to Buffalo and back for $1.14 or travel to and from Rochester for $1.60.

The original operators of the rail line sold their interests in the B. L. & R. Railway to Clifford Beebe and operated under an electric railway group based out of Syracuse known as the “Beebe Syndicate.” During the era of the First World War, Beebe was experiencing financial difficulties and the company was sold to a Rochester based interest that reorganized the line as the Buffalo, Lockport & Rochester Railroad in 1919.

Despite the early successes of the B. L. & R., the advent of the Great Depression led to the eventual collapse of the railway in 1931. The tracks remained unused until they were dismantled and removed in 1936.

As an interesting sidenote, a railcar used on this trolley line and stored at Knowlesville for a number of years. The wood car number 206 was eventually relocated to the New York Museum of Transportation at Rochester in 2010 where it is awaiting evaluation for future restoration.