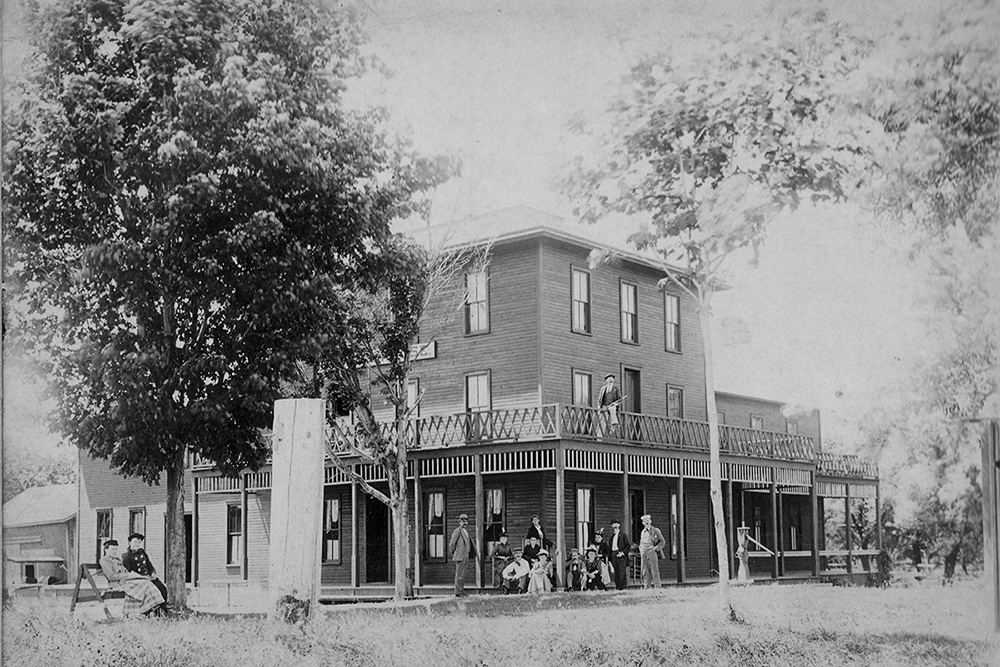 The stunning view provided by Lake Ontario led to the formation of hamlets and cottage communities along the lakeshore and eventually caused the establishment of numerous hotels and summer resorts in Orleans County. The wealthiest members of society used these locations as an escape from the hustle and bustle of city life, resulting in the growth of lakefront property serving as a seasonal destination for the out-of-towners.

In 1860, land originally purchased by Asa Lee at Troutburg in Kendall was transferred to his daughter-in-law Sarah J. Lee who oversaw the construction of what would later become the Ontario House. This large, luxurious hotel was “first class in every respect” and catered to locals and visitors alike.

Situated on the west side of the Orleans/Monroe county line, the complex consisted of a house, dance hall, and barn. Standing just to the west of the main house, the dance hall served as a “picnic house” for excursionists who were visiting the area by way of boat. The hall contained thirteen large tables attached at one end to the wall with hinges, allowing the tables to be folded out of the way when not in use. This provided a large open floor for parties, dances, and other events. The hall had one kitchen with two large cook stoves to provide nourishment for the guests.

Nearby was a barn that housed stables for nearly sixty horses. Guests could stable their horse for $.25 per day or $.35 per day if the owner preferred to feed their horse grain in addition to hay. Two small sailboats and a number of rowboats were available for the pleasure of the visitors, allowing for short trips out onto the lake.

Mrs. Lee operated the Ontario House for nearly twenty-seven years when she finally sold the property to William Sturges in 1887. At the time of the sale, the resort was regarded as the only successful temperance hotel in Western New York; the Ontario House remained successful despite the decision of the owner to refrain from selling alcohol. It remained a dry location even after the property changed hands.

A bowling alley was added to the property in the 1880s, at which time a guest could stay overnight at the house for $2.00 and special rates were offered for week-long stays at $5.00-$8.00 depending on the room. As a seasonal resort, the ownership held large opening events in May to start the year and usually concluded in October with a large dance party. Hundreds of couples attended these events, paying $.25 for admission to the dance hall. The parties of course were dry events with no alcohol for guests.

In 1880, the Ontario House saw the rise of its first competitor when Charles T. Bush constructed the Bush House on the east side of the county line. This property later became known as the Cady House and still stands on that parcel as a decrepit structure along the lake. The Ontario House continued it successful run under the ownership of Sturges until 1895 when it was transferred to Menzo Storer, then to J. Staub in 1917 before it was sold to an owner from Buffalo around 1921.

Although the buildings are no longer standing, this image taken sometime in the 1880s shows a crowd gathered along the porch of the Ontario House. The story of the Ontario House and other lakeside resorts are a testament to the splendor and beauty of Lake Ontario as a destination for residents and visitors alike.