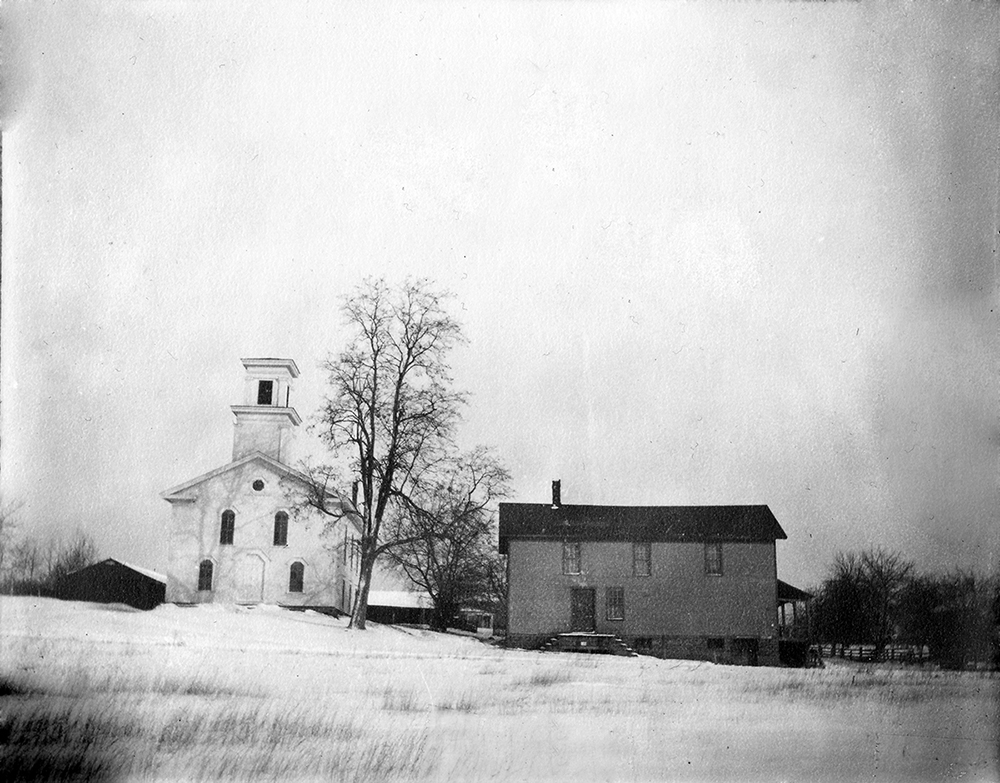 Taken around the turn of the century, this image shows the West Carlton Methodist Episcopal Church more commonly referred to as the Kuckville Methodist Church. The Greek Revival building was constructed in 1835 near the mouth of Johnson’s Creek thanks in part to the diligence and hard work of George Kuck.

A native of England and resident of Canada, Kuck arrived at Carlton in 1815 having absconded to the region from York, Upper Canada (now Ontario). He was issued a commission as an Ensign with the 3rd Regiment of York Militia in 1812 and later attained the rank of Lieutenant. When his step-father, Matthias Brown, was accused of high treason for deserting the 3rd York, Kuck was forced to leave Canada with fears that he may be implicated in Brown’s case.

Kuck was an industrious an intelligent man who made quick work of establishing a grist mill at Johnson’s Creek and opened the first store north of Ridge Road in 1816 to serve the infant settlement. Soon after, he established a warehouse near the lakeshore that would help drive other businesses to spring up in the region. Under the administration of President Van Buren, he was appointed to the position of Postmaster, a position he kept for nearly 30 years.

A man with no particular religious background, Kuck became a Christian in the Methodist Episcopal tradition in March of 1821 and several months later led efforts to institute one of the first religious societies north of the Ridge Road in Orleans County. The group was popular among the local settlers and met with great success.

According to his biography in the Pioneer History of Orleans County, Kuck was “…among the first and foremost in all matters of reform and advancement, active in the cause of temperance, morality and religion…” It is no surprise that he was first issued written permission to “improve his talents in exhortation” by Elder Philo Woodworth in 1829. Kuck was later granted permission to preach on August 31, 1833 by Elder Micah Seager of the Ridgeway Circuit, providing the opportunity to expound to the local population.

The following year a meeting was held and votes cast to form an organized group called the First Society of the Methodist Episcopal Church in the town of Carlton. The group elected five trustees including John Cash Fuller, Jerry Clarke, Wilson Hunt, Gilman Greely, and of course, George Kuck. The church edifice was constructed the following year on land donated by Kuck and contained a beautiful gallery with closed pews as was the tradition of that time.

Kuck was later ordained as a deacon by Bishop Elijah Hedding on September 24, 1837 and made a church elder by Bishop Thomas Morris on September 16, 1849 when the Genesee Conference held their annual convention at Albion. The population was devout but struggled to add to their numbers while old age drained their ranks. Nearly 6 years after becoming an elder Rev. Kuck was rewarded for his piety when the Bible Society of Carlton, to which he was president, was made an auxiliary of the American Bible Society.

The Department of History holds several original documents relating to Kuck’s religious endeavors in West Carlton, including a journal that chronicles the subjects of his various sermons during the mid-19th century. Nearly 171 years ago on April 13, 1845, Kuck delivered a sermon on John 4:24, “God is spirit, and his worshipers must worship in the Spirit and in truth.”

The Methodist Church at Kuckville remained a staple for the local community until July 27, 1986 when the congregation held their final service in the building, almost 30 years ago.