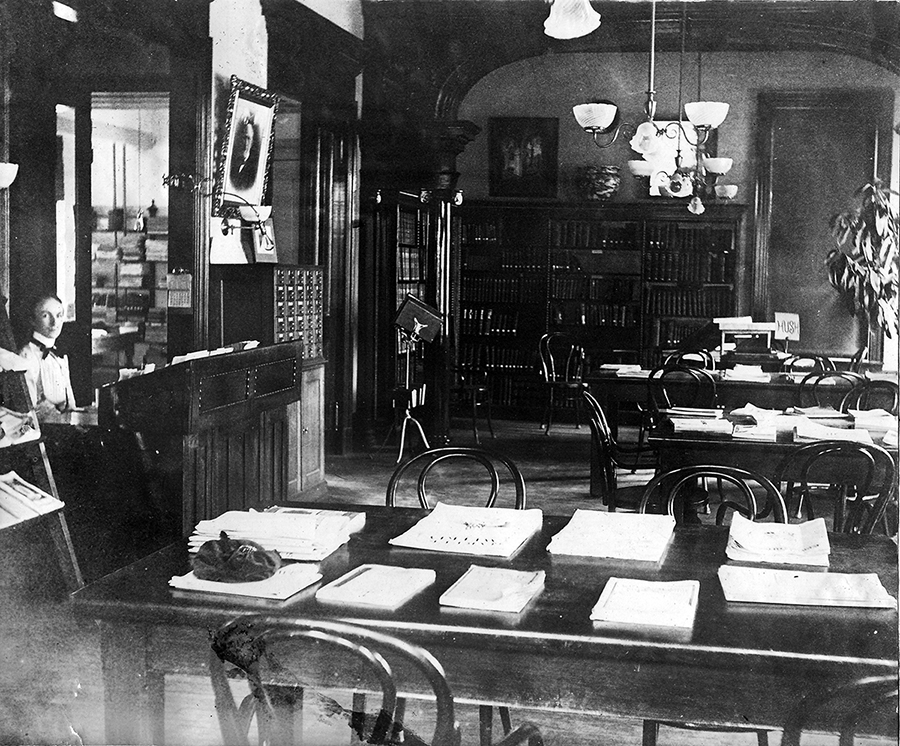 As the American Library Association closes 2016’s National Library Week, we take a look back at this interior image of the Swan Library taken in 1900. This year’s theme for library week was “Libraries Transform,” meaning libraries transform the lives of those who use them and transform the communities they serve. Of course, this also means libraries physically transform how they serve their communities.

This image shows the north room of the library known as the reading room, one of the few public spaces in the original building. We see a sign atop one of the tables in the rear of the room that says “HUSH,” the library’s original reference section with two shelves in the back, and numerous resources set out on the tables. Miss Lillian Achilles sits at the front desk, situated to look over the reading room, and the antiquated card catalog positioned near the librarian.

The Swan Library was established by the will of prominent businessman William Gere Swan upon his death in 1896. It was the executors of his will, Emma his wife and Isaac Signor who were responsible for carrying out Swan’s wishes. After the organization received its charter signed December 21, 1899 by Melvil Dewey (then director of the NYS Library), J. Mills Platt of Rochester was hired to develop plans for the conversion of the Burrows mansions to a functioning library.

The reading room stretched the length of the north half of the first floor, a desk was positioned to overlook this room and a window installed to receive and distribute books to patrons from the front foyer. A “Trustees Room” was positioned in the southeast corner of the building, providing the governing body a location to meet and the basement was affixed with a kitchen and dining room for events.

Shortly after renovations were completed, Lillian Achilles was hired as the Swan Library’s first librarian at an annual salary of $600. Although the trustees had consulted with her about the proposed layout of the building’s interior, she found numerous shortcomings that needed to be addressed immediately. Less than 25% of the total floor space was allocated for books and no space was set aside for processing and cataloging new materials.

Achilles designated a room as an office for this task and spent nearly three months cataloging the 4,900 books from the Albion Free Town Library and Albion Public Library as well as the 700 books purchased specifically for the new building. Without the luxuries of a typewriter, she spent countless hours handwriting all of the cards, which she finally finished on March 17, 1900; it would be another year before the card catalog was completed.

Now supported by taxes, the library’s original trustees felt that the library should be predominantly supported by Swan’s endowment. This led to severe budget limitations and restricted Miss Achilles’ abilities to purchase new books. The problem became substantially worse in 1907 when the Village of Albion withdrew their financial support. Along with several local drug stores, the library established rental collections to supplement income and provide continued access to information – support was eventually restored.

Despite these limitations, the library quickly became a cultural center for the community. It served the local schools as a supplement to small classroom collections, provided “quiet” games for children to play, established a boys club in 1901, and became a repository for historical artifacts – a true transformation from the traditional view of the public library’s role.

Any librarian will tell you that Miss Achilles was a saint for handwriting the library’s first card catalog!