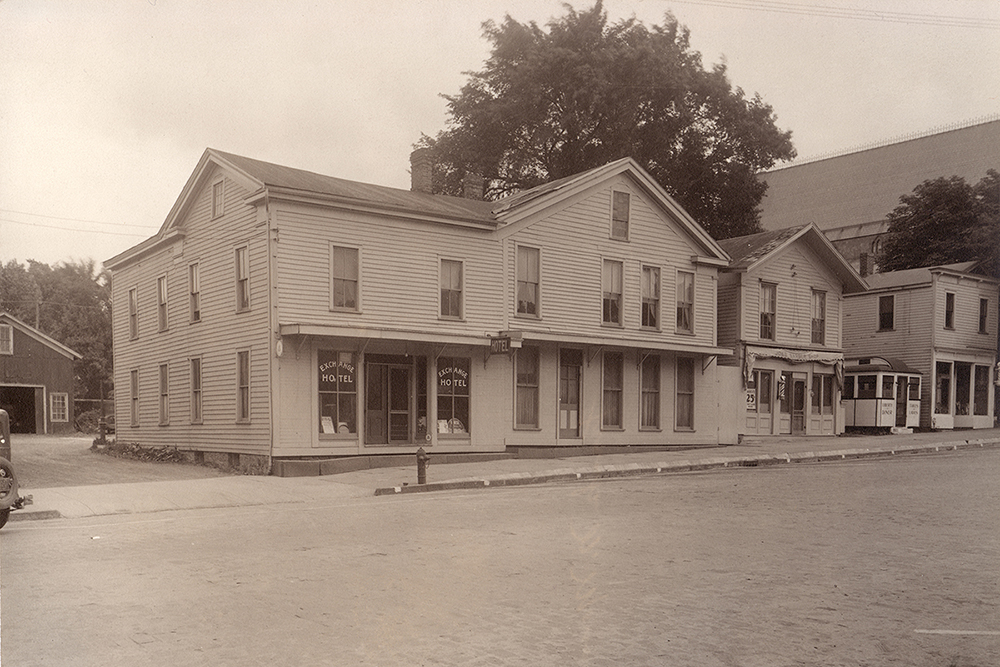 In this image taken in 1935 we see the Exchange Hotel which was located on North Main Street in Albion. The front windows are adorned with alcohol paraphernalia including a Genesee Beer sign, the hotel’s liquor license hanging in the left window, and the Bell Telephone Company signs indicating the presence of a public telephone.

At the time this image was taken, Patrick Grady was the proprietor of the business. An immigrant from Ireland, Grady had his start locally as a farmer spending several years working for Supt. Luddington at the Orleans County Alms House and on other farms throughout the area. He later worked as a hack driver for Anson Dunshee at the Orleans House in Albion, transporting patrons from the hotel on East Bank Street to the Clinton Street rail station. It was on January 1, 1913 that through a series of unfortunate events, Grady took control over the Exchange Hotel.

Next to the hotel was a barber shop and upon closer examination, we can see “Joe’s Barber Shop” printed on the awning. Owned and operated by Joseph Donatelli, the business was a partnership between Joseph and his brother Marion “Mike” Donatelli. The Donatelli family was well known throughout the Italian community as the founders of Donatelli’s Orchestra and Donatelli’s Italian Band. Both brothers acted as conductors for the music groups and Mike worked as a court interpreter for Italian immigrants who were unable to speak English.

Also visible is the Liberty Diner, a small lunch car situated between the two frame buildings. When this image was taken, the diner was only a year old but had fallen under the ownership of three different gentlemen before Fritz Bergman and George Root purchased the business in late 1934. In addition to the name of the business, the phrase “Tables for Ladies” was also painted on the front end of the car.

The term “Tables for Ladies” represents a distinct change in social constructs regarding women at the time. Prior to this, women who were seated at tables alone at restaurants were assumed to be prostitutes searching for business. As the role of the woman changed from the traditional “stay-at-home” mindset to one of “mobility,” the phrase “tables for ladies” allowed women to dine out alone or with others in a comfortable and respectable fashion. The sign represents the business owner’s understanding of a changing society and their willingness to offer a safe environment for women to gather without male accompaniment.

These buildings were razed in the late 1930s and early 1940s. Starting in February of 1937, work began on the demolition of the Exchange Hotel after Patrick Grady’s retirement and a gas station was constructed in its place. The barber shop and lunch car were replaced by a restaurant and the building to the far right remained in place until several years ago when the Village of Albion demolished it. A parking lot and vacant grass lot now occupy the space – the roof of the Presbyterian Church appears in the upper right corner.