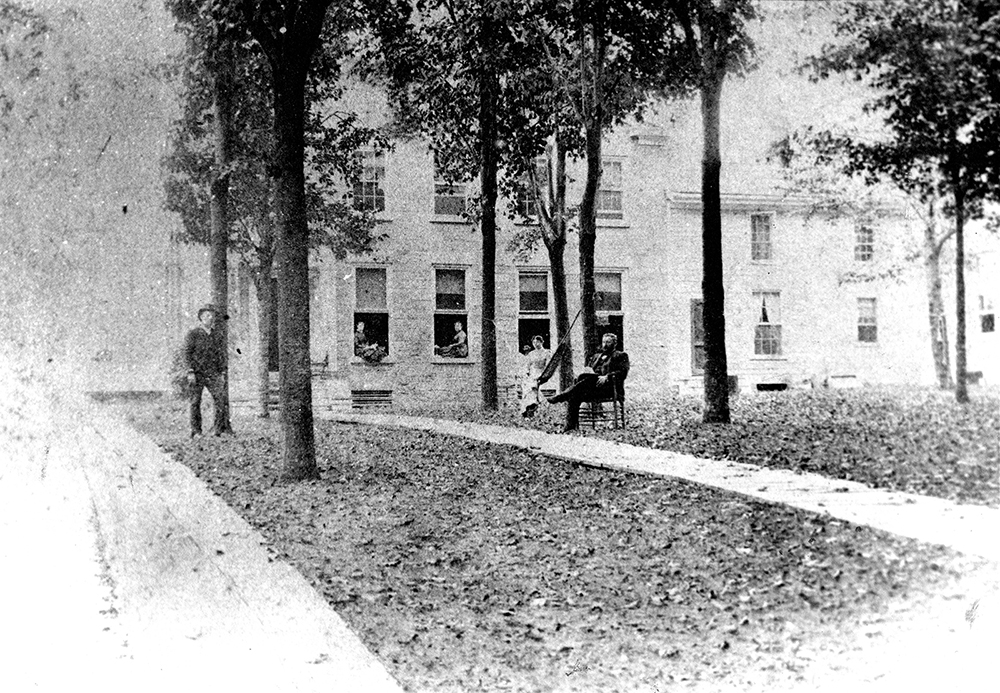 Nearly 180 years ago, the first jail in Orleans County was constructed at Court House Square of hewn timbers. Prior to the completion of that building, jail cells in the basement of the first court house were used to hold prisoners. During the county’s infancy, criminals were sent to Batavia for confinement.

This image shows the second jail, constructed of stone, as it would have appeared in 1885. Looking south on Platt Street, we see Sheriff Sullivan E. Howard of Holley seated in the front lawn of the jail. The wood structure to the right of the jail provided housing for the sheriff and his family. To the immediate right of the sheriff’s home and just out of view sits the court house. We can assume that the woman seated in the hammock to the left of Sheriff Howard is his wife Phina Cole Howard, their son William Howard leaning against the tree and their daughter Bessie Howard is likely one of the two young women seated in the front windows.

After this building, a third jail was constructed of Medina Sandstone before the current standing structure was built in the 1970s. During the earliest years of the penal system in Orleans County, the wife of the sheriff would cook meals for inmates and assist with the upkeep of the jail. Offenders from all municipalities would find themselves at Albion for a wide range of crimes from public intoxication to first degree murder.

Weekly police blotters appeared in the local papers, sometimes providing a humorous look into the wrongdoings of the past:

March 10, 1880 – an attempt to blow up the jail was aborted, the fourth attempt in recent memory to break out of the jail.

June 15, 1880 – local burglar Charles Amos digs himself out of the county jail but fails to make it beyond the yard; he is immediately recaptured.

January 12, 1883 – while locked up in county jail, Patrick O’Reilly declares he is one of the murderers of Lord Frederick Cavendish of Dublin, Ireland. The sheriff determines he is a liar, seeking free passage back home to Ireland.

December 9, 1886 – Mrs. Robert Mortimer, of Medina, is arrested and fined for chastising a female teacher at the Central school in Medina. In an attempt to avoid a jail sentence, she attempts suicide by overdosing on laudanum, but is unsuccessful.

August 1, 1889 – Mary Winchester, 34 years old of Shelby, is sentenced to 90 days in jail for using indecent language and insulting a woman at Medina.