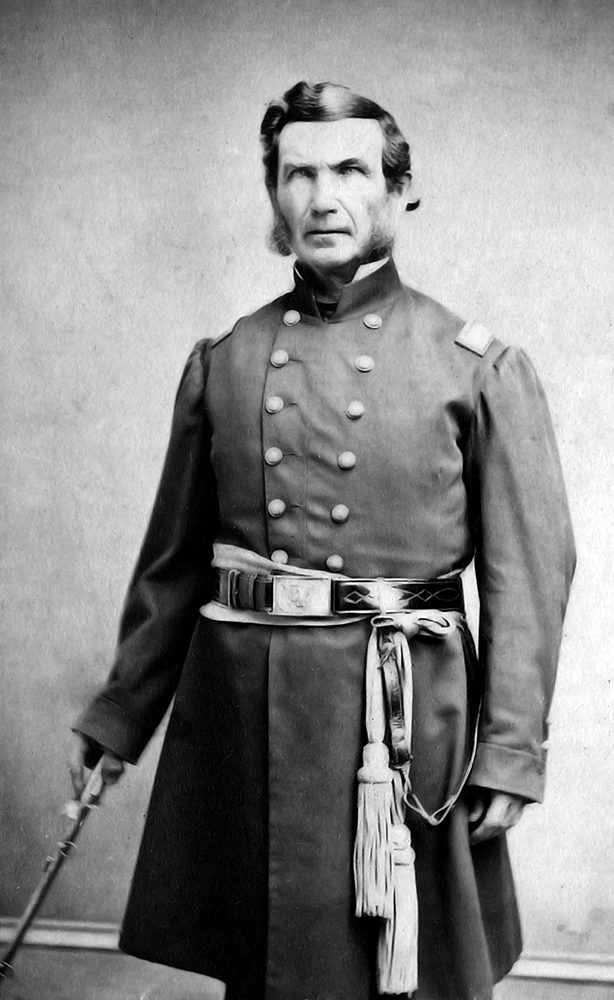 This image of Lt. Col. Henry Ludwig Achilles shows him garbed in his Union officer’s uniform taken sometime around 1862 at the studio of George Hopkins in Albion. A New Hampshire native, Achilles established himself in Rochester as a young entrepreneur and man of religious conviction. As an established tinsmith, he was responsible for starting one of the first foundries in Rochester where he engaged in the manufacturing and sale of sheet metal and tin. His early successes in business allowed him to contribute to the purchase of property for the construction of the First Baptist Church of Rochester of which he was a superintendent in the early 1830s.

When the First Baptist Church split into two congregations due to the overwhelming growth of the group, he assisted in establishing the Second Baptist Church in Rochester and was selected as one of its first trustees. As a respected gentleman in the city, he served a short term as town clerk of Brighton and local fire inspector.

After the death of his second wife, Samantha Howe, Henry was married to Caroline Phipps of Albion in 1839. Up until that time, Caroline had worked carefully to establish herself as an exceptional educator and was responsible for operating the Phipps Union Seminary with her sisters. Shortly after their marriage the newlyweds moved to Boston where they lived for nearly ten years, leaving Caroline’s sister Sophronia to care for the seminary.

In 1848 the seminary finally passed through the hands of the Phipps family when it was sold to Rev. Frederick Janes. Almost immediately after the sale was finalized, enrollment dropped from 100 students to less than 40. A frustrated board was poised to force Janes from his position and pleaded for Henry and Caroline to return. With great reluctance, the couple retook control of the seminary in 1849 and made quick work of restoring the institution’s reputation. The following year was marked by a spike in enrollment, which led to the construction of a wood-frame addition on the north end of the building.

During his time as head of the institution, Henry was active in local affairs. When Lincoln called for 75,000 volunteers to enter military service on behalf of the Union Army on April 15, 1861, Achilles and other men initiated a gathering at the Court House on April 18th. The group immediately took to organizing two companies of men, the first placed under the charge of David Hardie and the second under the charge of Henry Achilles, Jr. When the ladies of Albion had prepared a donation of two beautiful flags, Henry Achilles Sr. was asked to make the presentation to both units, the second under the command of his son.

Achilles enlisted in the service himself on January 6, 1862 and was placed with the 105th New York Infantry as a lieutenant-colonel. Just as David Hardie would do, Henry resigned his position in April of 1862 and returned to Albion to encourage other young men to join the Union cause.

Following the war, Henry and Caroline again decided to transfer the care of the seminary to a stranger, selling the building to Rev. G. A. Starkweather in July of 1866 for $20,000; totaling just over $325,000 today. Unfortunately the school suffered a similar fate as the first sale and the reputation of the institution was again ruined by its new owner. Again the board pleaded for Henry to retake control of the seminary, to which he utterly refused. It was thanks to the encouragement of his wife that the seminary was yet again brought under the control of the Achilles family and provided an opportunity to thrive. Henry died in 1881 from an abscess and was interred with his first two wives at Mt. Hope Cemetery in Rochester; Caroline was buried with her family at Mt. Albion.