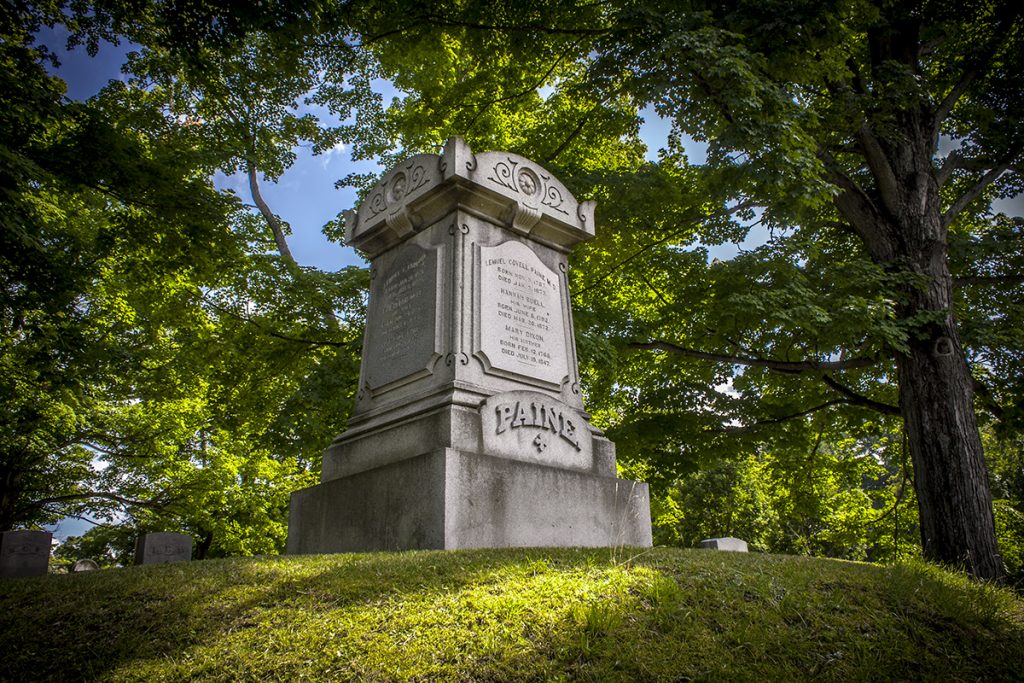 This photograph shows the gravesite of Dr. Lemuel Covell Paine as it appears today. A pioneer physician and Albion businessman, Paine was born November 8, 1787 in Vermont, the son of Dr. Ichabod Sparrow and Mary Dixon Paine. After the death of his father in 1807, arrangements were made for Lemuel to live with his uncle Eli Pierson and study medicine under the direction of Dr. Asa Stower at Queensbury, NY.

As he progressed in his studies, Paine found himself teaching in various one-room schoolhouses to raise the funds to support his education under Stower. Upon the completion of his term under the tutelage of the physician, Lemuel was subjected to the examination put forth by the Censors of the Medical Society of Washington County, which he passed with relative ease. Over the next two decades Paine travelled westward across New York, establishing himself in Clyde, New York for a period of time where he served as a mentor and instructor for several prospective physicians. Upon his eventual arrival in Albion, Paine was a well-respected and seasoned veteran in the medical field during a time when so many doctors were self-taught.

Nearly 50 years of age at the time of his arrival in 1836, Paine established a partnership with Dr. Orson Nichoson under the name Nichoson & Paine; the firm specialized in the sale of drugs, compounds, and books. Dr. Paine was a pious man, so it was no surprise that he served as a deacon of the First Baptist Church in Albion and an early trustee of the Rochester Theological Seminary (Colgate Rochester Crozier Divinity School). His commitment to education was apparent through his appointment as a trustee of the Phipps Union Seminary, the Albion Academy, and the University of Rochester.

His role not only as a respected physician but a successful businessman placed him at the top of the list for political races and appointments. Prior to his arrival in Albion, Paine had served as Postmaster in Fulton County and his political affiliation as a Whig would earn him similar positions in Orleans County. A brief term as Orleans County Treasurer was followed by an appointment as one of three commissioners overseeing the administration of Mt. Albion Cemetery.

Unlike the long lineage of physicians that preceded Lemuel, his sons chose a slightly different career path. With guidance received from their father, Lemuel C. Jr, Cyrus, and James Paine formed a drug company in Rochester known at the Paine Drug Company. The business became a top-tier drug manufacturer in the region and left the oldest brother with an estimate $890,000 estate upon his death in 1899; valued at $24 million today.

Dr. Paine died at Albion on January 3, 1873; it’s safe to assume that his sons were responsible for the erection of this beautiful granite monument located in the eastern section of the cemetery that overlooks the original main entrance (now the east gate).