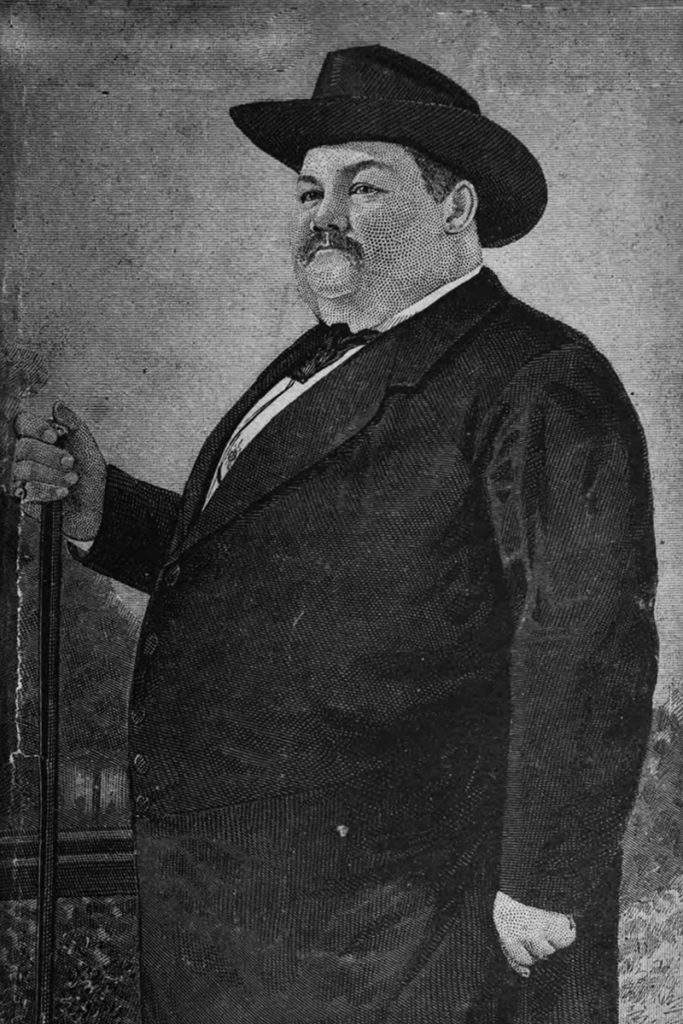 Orleans County boasts a long an impressive lineage of entrepreneurs, inventors, and local celebrities so it should be no surprise that this week’s column features yet another area native who developed an illustrious career for himself. The child of John Babbage and Fanny Wescott, Edward Frederick Babbage was born along the Oak Orchard River in Carlton, New York around 1841. His mother was an English immigrant arriving in the United States in 1837 and marrying her husband the following year.

After spending their earliest years in Orleans County, the Babbage family relocated to Rochester where the father worked as a fruit peddler. It is said that Edward was always on the “large” side, being exceptionally big at the age of six and weighing in at 200 pounds at the age of fourteen. His interests were varied, so much of his early working career was spent experimenting in various vocations; first as a hotel porter, then as a hotel manager, a traveling salesman, museum manager, and eventually a glassblower.

At the conclusion of the Civil War, Babbage was enlisted as the road agent for a minstrel troupe operated by veterans of the 15th Engineer Corps. After a three-year stint with the troupe, his services were sought by the well-known minstrel troupe operated by “Happy Cal” Wagner. As the story goes, Wagner was unaware of Edward’s initials sent the letter addressed to “Phat Boy” Babbage; from that point forward, the name stuck like glue.

“Phat Boy” Babbage became a celebrity thanks to his large size, amiable personality, striking looks, and sense of humor. During his years as a road agent, he claimed to have visited every city and town that boasted more than 5,000 inhabitants. He became a popular public spectacle and a larger-than-life personality, which conveniently matched his physical stature. As a result, newspapers remarked “…he was the fattest of the fat…” and “…was as broad as he was wide…”

Babbage’s rise to fame occurred during the time in which the country’s wealthiest and most famous capitalists were scarfing up land throughout the St. Lawrence River region. Venturing northward, Babbage was enlisted by the steamboat operators of the Thousand Islands to act as a tour guide for the region. He often sat aboard the bow of the boats equipped with his signature felt hat and diamond lapel pin, sharing colorful stories of the area’s rich and famous inhabitants.

“Phat Boy” was an astute guide and spent much of his time brushing up on the history of the region, authoring several books which are still viewable today. Babbage’s book entitled “The Phat Boy’s 15 Years on the St. Lawrence River” highlights his career on the river as well as stories of celebrities he met along the way including President Ulysses S. Grant and George M. Pullman.

Humorous anecdotes fill the pages often discouraging readers from attaining a mass equivalent to his own, remarking that such extreme weights were far from enjoyable. Pushing 330 pounds by 1890, Babbage’s wife had died several years prior largely due to her excessive weight and his own twin brother, Dr. Edwin F. Babbage lagged behind at a mere 300 pounds. On June 23, 1891, Babbage felt ill and meandered up the stairs of the Marsden House at Alexandria Bay. Whistling his usual joyful melody as he ascended, he collapsed at the head of the stairs and died at the age of 51; 340 pounds his final weight.