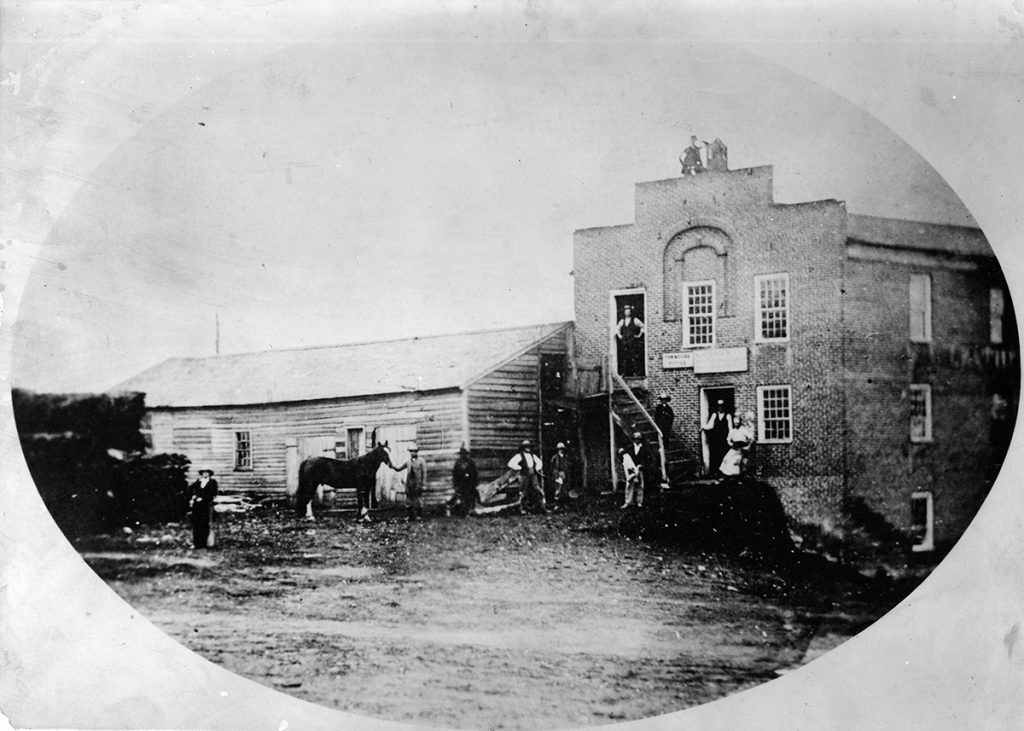 Coming to Shelby in 1817, Samuel Bidelman was brought to Shelby by his Uncle John Garlock to a site cleared by Bidelman’s father during the previous year. The Bidelman clan was built from strong German stock and resided in Herkimer County before trekking westward to the wilderness that was Orleans County.

As Arad Thomas recalls in the Pioneer History of Orleans County, the Bidelman family was greeted by a large contingent of locals who welcomed them to their new home. Upon the crowd’s departure, Henry Bidelman realized that his new neighbors had taken a large portion of the wheat flour brought with them into the virgin forests. The family was forced to live off of the remaining flour, bran bread, and sea biscuit leftover from the War of 1812 stores at the Batavia Arsenal. The crops of 1817 eventually provided alternate food sources for the settlers of the area.

In 1820, Samuel left his family “with an old straw hat, a pair of tow cloth pantaloons and a second hand coat” to start his own life at Ridgeway Corners. There he entered the employ of Isaac Bullard learning the trade of tanning and shoemaking. Bullard fancied liquor and was said to be a “hard master” to his young apprentice; Isaac died in 1827 and Samuel eventually purchased the business from his master’s wife.

In 1835 Bidelman sold his tannery at Ridgeway and with $1,500 to his name, purchased the old tannery once belonging to James and Elihu Mather in the village of Gaines. That tannery, seen in this picture, shows the site as it appeared in 1870 located along the south side of the Ridge Road, just east of the Oak Orchard Road intersection. In its earliest years the local Masonic Lodge met on the upper floor and the property, as well as the Mather brothers, were allegedly involved in the disappearance of William Morgan in 1826.

With the outbreak of the Patriot War in Canada during the year 1838, Bidelman provided support to the Canadian rebels, allowed for the establishment of a “Hunter’s Lodge” within the second story of his tannery, and provided the group with a cast iron bark mill to be used for casting cannon balls. In his generosity and commitment to the movement he gave his last gun and a pair of boots to fit out a soldier who traveled to Canada to join the rebels. It is said that Samuel was a lieutenant with an artillery militia company in Yates and gave the unit’s artillery piece to the Patriots.

In 1841 Bidelman established a partnership with Robert Ranney, which lasted five years before it dissolved due to a lack of profit and frequent disagreements. Upon dissolution of the partnership, Bidelman went into business with his sons up until the property burned in 1873. His son Charles rebuilt the business and operated it for another ten years before selling his interests in the company. At the time this photograph was taken, the town offices for Gaines were housed on the second floor.

Bidelman served several terms as Gaines Town Supervisor as well as Justice of the Peace. He was also present for the 1859 collapse of the Canal bridge at Albion when he and his wife were thrown into the water along with hundreds of others which watching a tightrope walker attempt to cross “Clinton’s Ditch.”