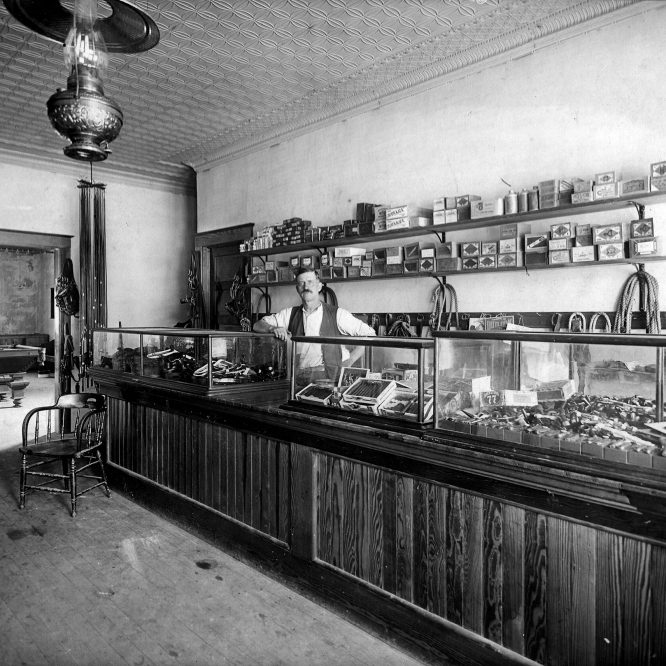 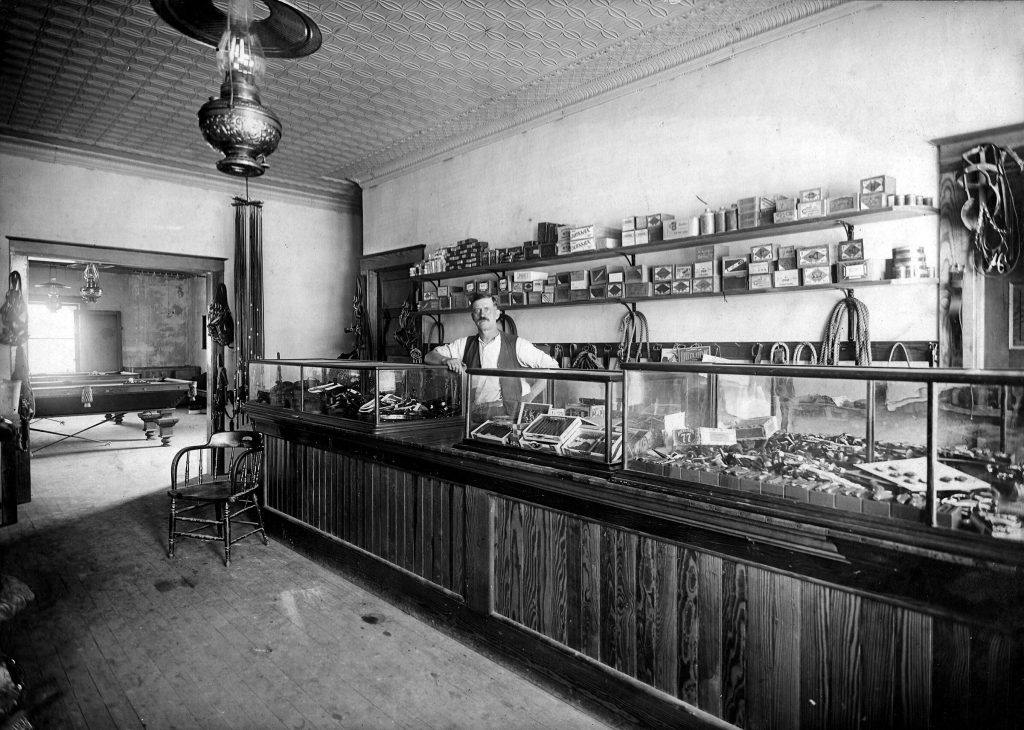 This photograph shows the interior of James Trivit Lacey’s store located on east side of Kendall Road near the intersection of Kenmore Road. Born at Tunstead, Norfolk, England in 1859, Lacey arrived in the United States at the age of 25 in 1884 and lived in the Yates/Carlton area for several years before relocating to Kendall. It was at this location that he would operate a shoe shop, confectionary store, and billiards parlor.

On May 6, 1901, Lacey closed up shop for the day and departed the business for his home located up the street. All was quiet until a fire was discovered in his storefront by a passerby, who alerted nearby residents. The church bells tolled to call community members to the town square and the process of extinguishing the fire began. Despite their best efforts, Mother Nature had other plans and a swift northeasterly wind pushed the flames to nearby buildings.

With Lacey’s store fully engulfed, the fire jumped to the drug store of Charles Spring to the south and the hardware store of Ephraim Fuller to the north. The fire continued to spread, setting the meat market of Otto Seigel and a nearby residence ablaze. As the wind continued to blow, the flames crossed the street and set fire to the stores of Sherrill Sanford and Nelson Stevens.

Fire fighters labored through the night with little hope of extinguishing the blaze, which as Ray Tuttle recalled in the 1950s caused “folks [to] believe the world was coming to an end because the good book had stated that someday it would all be destroyed by fire.” Kendall’s business district was nearly a total loss from a fire causing over $40,000 in damage. When all was quiet yet again, Lacey had suffered a loss of $500 with no insurance to cover his merchandise. Nelson Stevens, who had just opened his business the same year, suffered damages topping $2,000 with no insurance to cover the loss.

Lacey reopened his business in the office space owned by Seth Jones in Kendall and while the town wished him well in his new venture following this devastating fire, he would yet again suffer from a similar catastrophe nearly 12 years later. On September 16, 1913 Lacey’s store yet again burned as a result of a fire starting in the hardware store of Payne & Wright. The building in which Lacey was leasing was a total loss, resulting in over $25,000 in damages. Unfortunately, in addition to the loss of his business, Lacey lost his beloved hunting dog in the fire.

It is likely that this image, with James Lacey standing behind the counter, was taken prior to the 1901 fire that destroyed the store. The back counter is filled with materials used for making harnesses and shoes and the glass display cases are filled with cigars. The most noticeable feature in the building are the billiards tables located in the back room. Although the cause of the fire was never definitively know, the oil lamps hanging from the ceiling could be a good indicator of a possible cause.