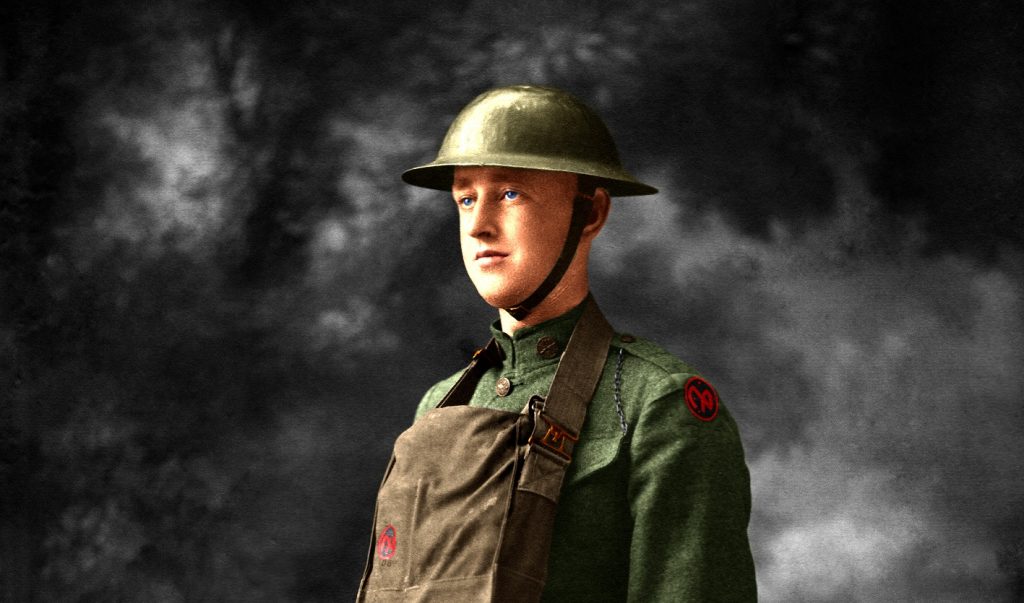 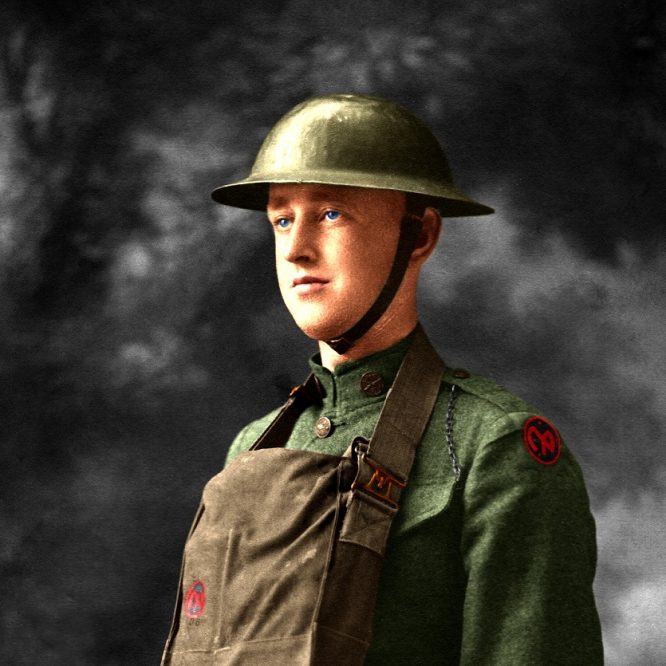 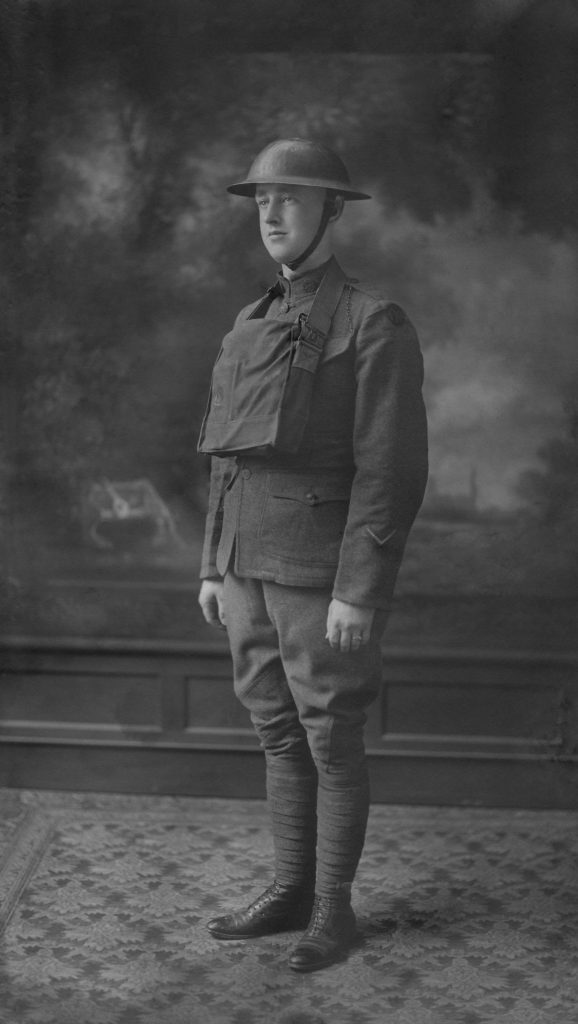 With an 82 to 6 vote in the Senate, the United States Congress declared war upon Germany 100 years ago on April 6th. After campaigning in 1916 on the claim that he “kept us out of war,” the Southern Democrat Woodrow Wilson had reneged on this promise after asking a special joint session of Congress for the declaration just days earlier in 1917.

Men throughout Orleans County heeded the call to service by enlisting with local National Guard regiments or enlisting directly with federal units. Howard G. Hinckley, a Medina resident, was one of the men who signed up for service within a week of the declaration of war. The son of Thorn and Allie Garter Hinckley, Howard was raised on South Academy Street in Medina where his father worked odd jobs as a carpenter. The 22 year old was mustered into service with Company F of the 3rd New York National Guard, the unit stationed out of Medina’s Armory.

When called into active duty, the unit was designated as the 108th Infantry with the 27th Division and men were transferred to Camp Wadsworth in South Carolina for basic training and military maneuvers. It was during this training that Hinckley was promoted to the rank of private first class in early August of 1917 and then to the rank of corporal in September of the same year. As Company F trained in South Carolina, U.S. troops trickled into Europe totaling 14,000 by June of 1917. 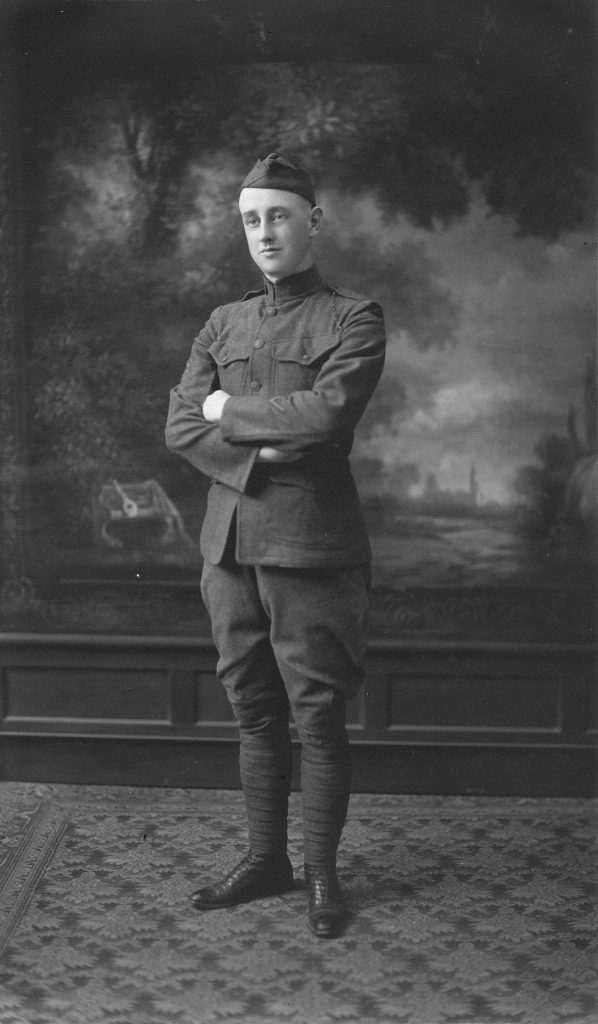 Departing Camp Wadsworth on May 2, 1918, Company F traveled to Newport News, Virginia where the unit embarked for Europe aboard the U.S.S. Antigone and H.M.S. Kurtz. When the 108th arrived in France, the total number of U.S. troops in Europe had increased to over 1 million. Service was quiet for the men of Company F, spending the majority of their summer in 1918 training with the British Army. As plans developed for an eventual attack on the Hindenburg Line, the 27th Division was ordered to the front lines in anticipation of a major offensive in September of that year.

On September 27, 1918, the unit marched 8 ½ miles from their bivouac camp near Ronssoy, resting near Templeaux le Geurard. They covered the remaining 6 miles under the cover of darkness while taking heavy artillery fire and gas concentration; it was during this march that Medina native Frank Bloom was killed by artillery fire. 2nd Battalion arrived on the front lines at daybreak, led by Capt. John S. Thompson, who stretched the unit 1,500 yards from a location near Valle Post to Bull Post.

Command set zero hour for 5:50am on September 29th, an advance that was preceded by a massive machine gun and artillery barrage. As the whistles blew and men climbed out from the trenches, more than 100 machine guns from the 27th Division opened fire supported by 23 brigades of British light artillery and 10 brigades of British heavy artillery. Nearly four minutes of heavy shelling cleared the land for the infantry advance. A rolling barrage, firing for four minutes every 100 yards, would lead the way for the 27th Division.

An immediate German counter-barrage inflicted heavy casualties upon the 108th as it fell across the initial advance. The men of 2nd Battalion were required to advance several hundred yards before they reached a point that was in line with the rest of the division. Met by heavy machine gun and artillery fire, the men of Company F advanced as quickly as they could until meeting concentrated Germany opposition at the main defenses along the Hindenburg Line.

A thick cloud of smoke settled on the battlefield as officers and enlisted men were cut down in a hail of gunfire. 2nd Battalion, consisting of over 400 men at the start of the engagement, a formidable unit of men, many whom had served through the Mexican Campaign of 1916, suffered casualties that would cut their numbers in half by the time they reached the German line. Facing a tangled web of barbed wire and overwhelmed by small arms fire and a barrage of hand grenades, the men pushed through the wire either running though paths already cut or by throwing themselves over the thicket.

Less than 200 men jumped into the German trenches, engaging the enemy in hand-to-hand combat at times, taking 100 prisoners, 4 field pieces, machine guns, anti-tank rifles, and other supplies. The final prisoner count totaled 159, constituting nearly the same number of men who remained in the battalion. The men of Company F fended off counterattacks for the remainder of the day until relieved by friendly troops with the 3rd Australian Division.

Hinckley survived the engagement without harm, though many men from Orleans County were not as fortunate. The mass casualties suffered on September 29th and throughout engagements in mid-October led to Hinckley’s eventual promotion to the rank of sergeant on October 28, 1918. The men of Company F remained in service overseas through the Armistice on November 11, 1918, eventually returning home in March of 1919. After his discharge, Hinckley returned to the home of his parents, remaining a resident of Medina until his death in 1990.