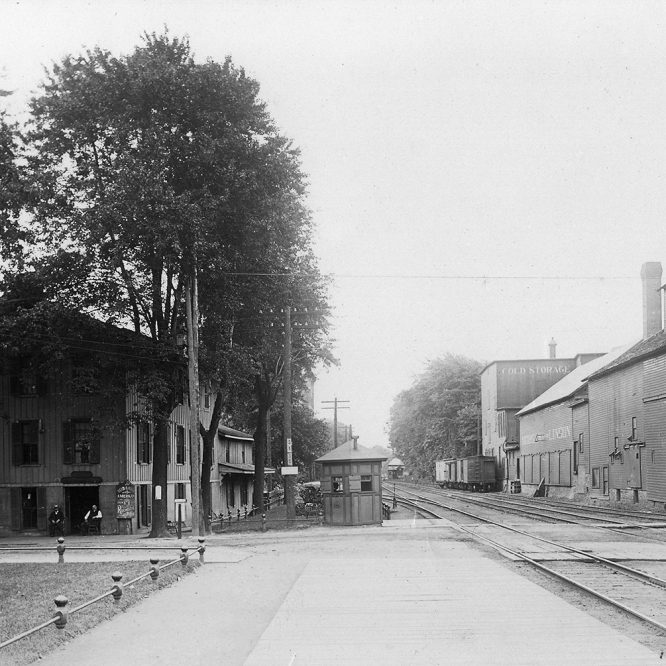 This photograph, taken sometime around 1900, shows the New York Central Railroad crossing at Clinton Street in Albion looking east towards Main Street. The photographer is standing on the platform of the train station on Clinton Street in an attempt to showcase two important businesses in the vicinity.

On the right is the business of Morgan & Linson, started in 1887 by Benjamin Franklin Morgan who purchased the operation from Sheldon & Warner. Morgan, a son of William Pitts Morgan and native of Gaines, then brought Lyman Sewall Linson into a partnership in 1890. Linson was an 1876 graduate of New York University who attended the University of Pennsylvania to study law before working out west in the railroad industry. His return to Albion and entrance into the partnership with Morgan likely brought a level of expertise required for shipping goods by way of rail. The pair dealt in coal, mason’s supplies (lime and cement), and produce, focusing specifically on the storage and shipment of apples and beans.

Morgan & Linson constructed additional coal sheds at this facility in 1900, which included the implementation of an elevator used to lift coal for storage in bins located on the upper floors of the building. Coal was then dropped down chutes and into wagons for delivery to homes throughout the area. Morgan’s death at New York City in 1909 following a lengthy illness led to the eventual dissolution of the partnership. In 1917, Guy Merrill, Platt LaMont, and Elbert Rowley formed the Morgan & Linson Cold Storage Company, Inc., taking over the property and operating the business; Linson retained partial interest in the company.

Around 1941 this building was devastated by a fire during a period of time in which the Atlantic Commission Company was leasing the facility to store onions. Workmen backed a cart into a kerosene stove, knocking it into a coal bin, which started a small fire. The flames were quickly extinguished and the men returned to work unloading a freight car outside. The flames reignited and the alarm was sounded. 50,000 bushels of onions were destroyed but thankfully the brick cold storage building and office was saved from obliteration. Eight firemen were stationed at the facility overnight to quell any flames that started up.

To the left is the Albion House, one of Albion’s larger hotels along with the Orleans House and Exchange Hotel. The photograph shows five young children seated on the front steps and two men seated on the corner of building adjacent to a sign that reads “Reed & Allen, American Rochester Beer;” likely the entrance to the bar. Attached to the tree out front is a sign that reads “Livery.” Like many hotels in the area, hackney cabs (horse drawn taxis) were offered to pick up or drop off visitors at various stops in Albion. The barn that housed the horses at the Albion House was sold in 1922 to Albert Foote, who relocated the building to his farm in Barre.

One other interesting item in this photograph is the small shed located along the railroad tracks; another is visible in the distance located along Main Street. These flagman’s shanties were an essential feature at railroad crossings. Approximately eight feet across and constructed in a hexagonal shape, the buildings contained a small coal burning stove, a bench seat, and a small stock of coal located under the bench. Men would sit inside of these shanties for eight hours each shift, three each day, exiting the building to stop road traffic as trains were crossing. Although the job seemed simple, it was frequently dangerous as flagmen were responsible for observing road and rail traffic simultaneously. In 1926, Thomas Coffey was struck and killed by a train while working as the flagman at this crossing. Negligence or lack of awareness was harmful, if not fatal.

An interesting news story appeared in papers throughout Western New York in 1908. Morgan & Linson’s office cat went missing and it was feared by the owners that the cat had climbed into a boxcar, only to be carried off to some far-off place. A telegram was sent immediately to Cincinnati, the next stop for the produce that was being shipped. Soon after the telegram was sent, a response was received notifying the owners that the tabby was found within one of the boxcars having survived eight days without food or water. To make the story more remarkable, the cat was returned to Albion by express train that same day.

I’m not sure what is more interesting, the fact that the cat was rapidly returned to Albion, or that this was considered “news” at the time!