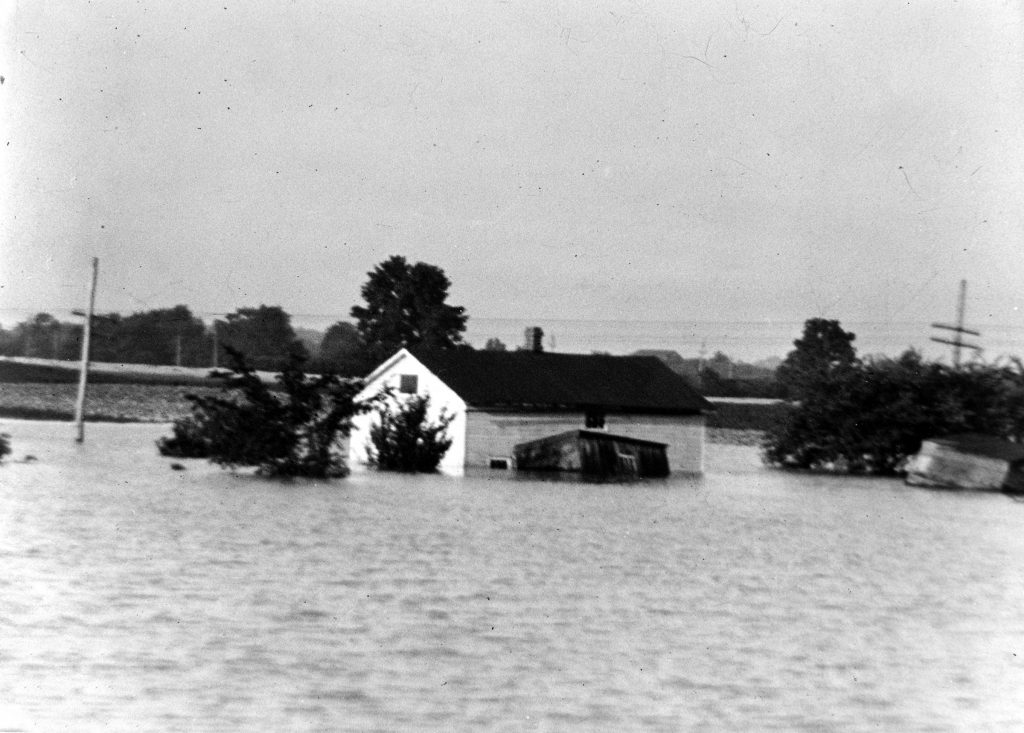 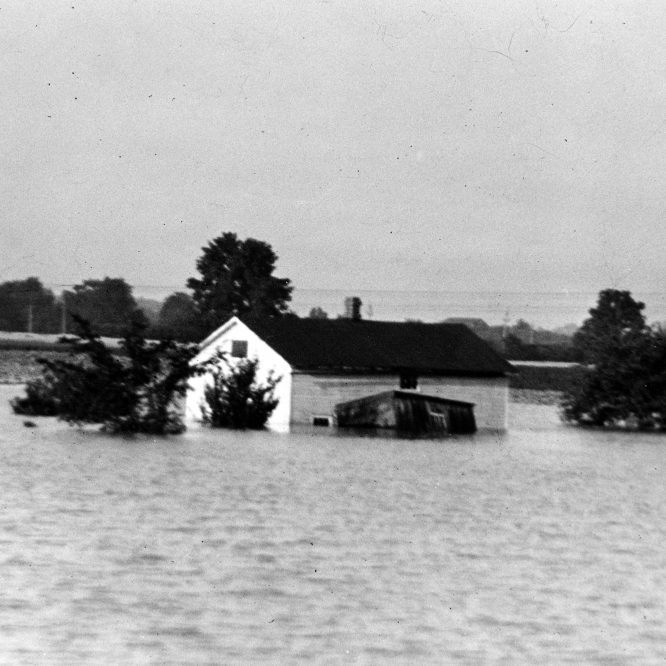 The success of the Erie Canal was not without trials and tribulations over its 200-year history. These photographs, taken in August of 1927, show the damage sustained during an extensive break in the canal wall near Eagle Harbor.

On August 3, 1927, local farmers observed a slight leak in the south wall of the canal near the Otter Creek gully. L. E. Bennett reported seeing a three-foot square hole open up, spilling thousands of gallons of water out of the waterway in a matter of minutes; the initial opening formed approximately 100 feet west of the Otter Creek culvert. Within a relatively short period of time, the flooring of the canal gave way and the south wall broke free, creating a hole that spanned 50 feet in length and 7 feet in height.

Newspapers reported that over 1,000,000,000 gallons of water had spilled into the neighboring fields surrounding Eagle Harbor, creating a large lake that reached 20-60 feet in depth in certain areas. Canal employees contributed the ongoing issue of water backup to the damming of the Otter Creek culvert by debris and a leaking guard gate at Bates Road in Medina.

Canal Commissioner Thomas Farrell rushed to Albion shortly after the break was discovered to direct efforts to rebuild the collapsed wall. It was his impression that the repairs would be completed within ten days; however his more pessimistic colleagues anticipated a minimum of three weeks to finish the work. Albion officials pleaded with the State to keep the waterway open from the Lattin’s Bridge Guard Gate (now Bowman’s Bridge) through the eastern section of Orleans County.

Although this ensured open traffic through Albion, it did little to remedy the disruption to major shipping traffic coming from Buffalo. It was reported that 1-2 million bushels of grain were stopped at Buffalo due to the break. The catastrophic rupture occurred during the peak shipping period, delaying grain, sugar, and metal shipments from points across the Great Lakes region. Panicked farmers urged canal workers to expedite the repairs to alleviate extensive flooding on their lands, which threatened to destroy crops and orchards.

One of the photographs shows the submerged home of John Porter, who reported that his 1 acre crop of potatoes was submerged by 10 feet of water. Other farmers anticipated that their orchards would see the effects of long-term submersion over the next several years. Local potato, cabbage, tomato, cucumber, and grain crops were threatened by the extended flooding, but most feared that the potential for warmer weather would finish off any crops that managed to survive.

The break became a spectacle, drawing thousands of motorists to the area. Professional and amateur photographs alike flocked to the site, snapping images of the damage. The influx of spectators forced State Police officer to guard the location, preventing access by curious onlookers.

Over 250 men were hired to work night and day in an effort to expedite the repairs. Over 20 trucks, 6 steam shovels, and other pieces of power equipment were utilized to hasten the project. Within two weeks the majority of work was complete, resulting in the laying off of 150 workers who were employed with the carpentry gang. Newspapers reported that state truck drivers were raising concerns about the use of unlicensed trucks and drivers to haul stone and materials on and off the job site. After all work was completed, the total damage was estimated at $250,000 ($3.5 million today) and residents impacted by the flooding were expected to bring lawsuits against the State for damages.