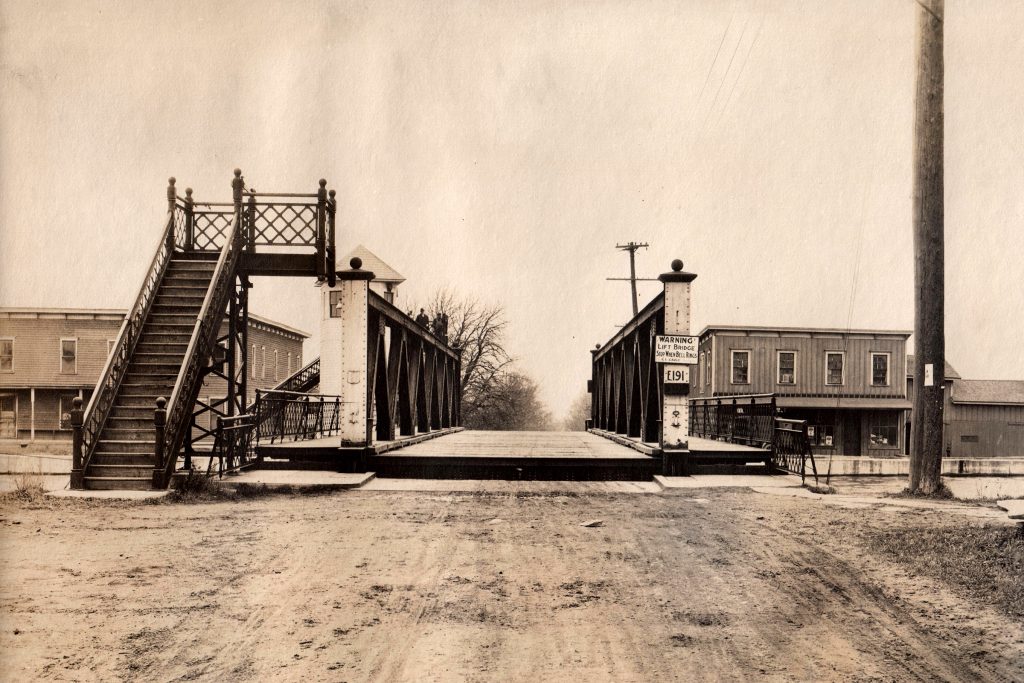 Did you know that Orleans County has the most lift bridges along the Erie Canal? Of the 16 vertical lift bridges that exist between Lockport and Fairport, seven are located within our county; Monroe County contains five, while Niagara County holds four. This Warren pony truss style vertical lift bridge that stands at Hulberton is 145 feet long by 18.6 feet wide, curb to curb.

Taken on November 23, 1922, this image shows the Hulberton Lift Bridge as it appeared approximately nine years after it was completed. On April 19, 1912, Skene & Richmond of Louisa, Kentucky were awarded Contract 104 by New York State to construct a number of bridges along the Erie Canal including spans at Spencerport, Adams Basin, Brockport, and Gasport in addition to the Hulberton structure. The contract, totaling $245,688 (approximately $6.2 million today), was completed the following year.

The photograph was taken approximately 100 feet south of the bridge by the NYS Engineering Department of the Western Division looking north across the Canal. Two buildings are visible, including the Hulberton Hotel to the left and the store formerly operated by John Moore & Sons. The bridge is raised approximately 18 inches and a sign hangs on the right post that reads “Warning. Lift Bridge. Stop when bell rings.” Notice that there are no barricades that drop down to block traffic, so it was the responsibility of pedestrians and drivers to pay attention to the bridge as they approached.

The earliest bridge tenders for this span included Dorr Peck and Delos Smith of Holley R.F.D, and Dominick Christofaro of Hulberton in 1914. Notices in the local paper from 1916 show that Aaron Anderson, Henry Prince, and Joseph Buschio of Hulberton were employed as bridge tenders, earning $2.00 per day for a period of 31 days ($62.00 total). In 1922, when this photograph was taken, N. Licursi, C. Mowers, and James Howker were all employed as tenders, the latter two earning $3.00 per day and Licursi making $4.50 per day.

The Hulberton span was the site of numerous unfortunate accidents over the years. In 1896, Joseph Brunetti brutally murdered Nicolo Chiochio along the towpath near Hulberton following an extended altercation surrounding Brunetti’s inability to speak English. In 1929, seven years after this image was captured, the body of respected local businessman Bert Alderson was found submerged near the bridge. Coroner Leon Ogden suspected that Alderson had slipped and fell into the Canal near the bridge. Two years later, a Rochester electrician named Patrick Maloy who was working on the bridge suffered a massive heart attack and died.

As noted above, the bridge did not have any indicators beyond the warning bell to notify pedestrians and drivers that the tender was raising or lowering the span. The result was a number of accidents involving motor vehicles, including the 1928 collision between an automobile belonging to James Clark of Hulberton and the bridge deck. While approaching the Canal, Clark failed to see the raised deck resulting in the crash. When he sued New York State in 1933 for damages, he relied on nearby residents to corroborate his story, which required the courts to seek assistance from interpreters. The high number of Italians who resided in the small community made it difficult to communicate. As a result, accidents like these pushed residents to seek the aid of a flagman to prevent future mishaps.