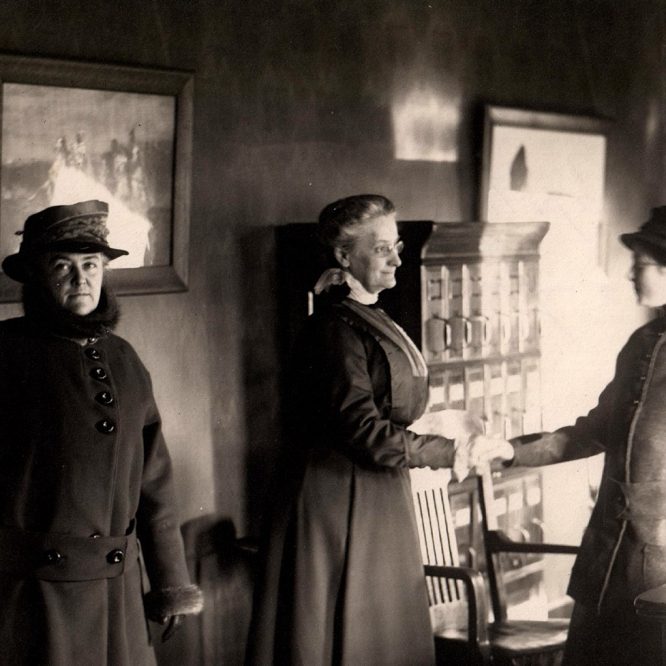 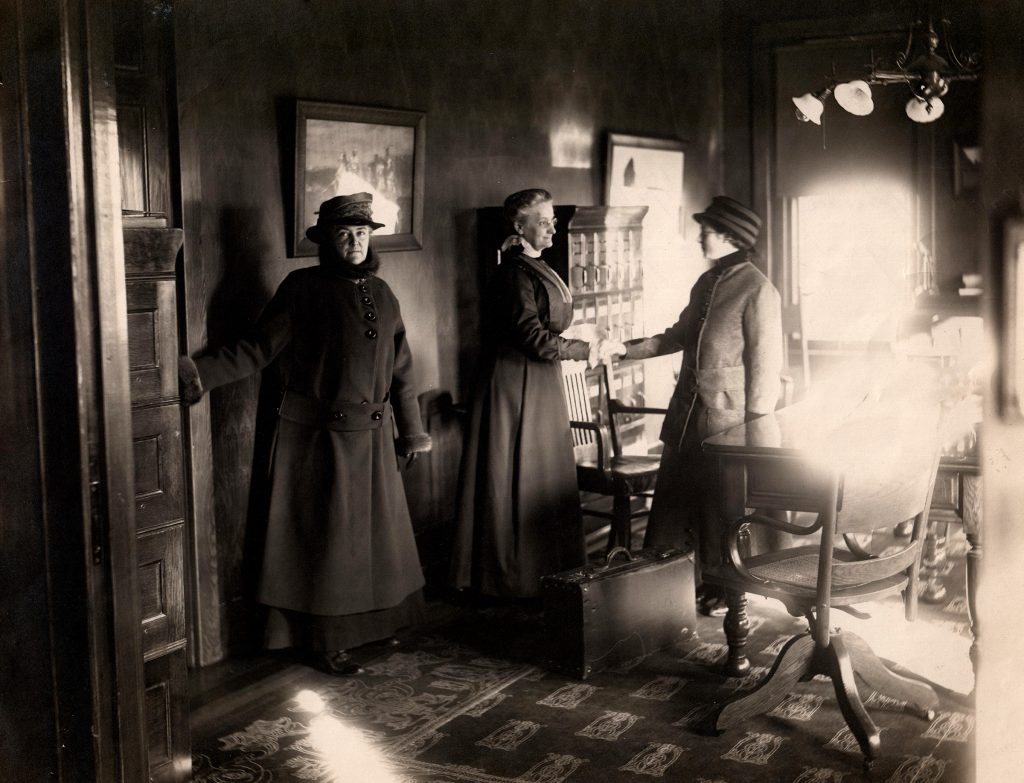 This photography, taken prior to 1915, shows the main office located within the administration building of the Western House of Refuge (now the Albion Correctional Facility). Miss Alice E. Curtin, the superintendent, stands in the center of the room shaking the hand of a young woman who is preparing to depart the facility on parole. Standing near the door is Miss Katherine Capitola Grinnell, the institution’s parole officer, who is prepared to escort the young woman to the railroad depot.

Miss Curtin ran a conservative operation at the House of Refuge as the institution was intended to rehabilitate young women who failed or refused to adhere to the strict gender norms of the time. The 1914 annual report for the Western House of Refuge shows that the inmate population totaled 238 women at the conclusion of the fiscal year with an annual average of 229 inmates; the facility’s capacity was rated at 215. Young women were forced to sleep in corridors and public areas while healthy and sick women were forced to share sleeping quarters in the hospital. The Board of Managers previously requested $35,000 in funding to construct a new cottage along with $25,000 for a new cottage for the care of the institution’s infant population, but Governor Glynn vetoed the appropriations. A portion of the total appropriations were earmarked for the construction of an iron fence that was meant to prevent visitors from wandering onto the grounds.

The institution remained under the direction of Miss Curtin until her resignation in October of 1915; Mrs. Flora P. Daniels of Buffalo was appointed in her place at an annual salary of $1,500. Annual reports from the years leading up to 1919 provide valuable insight into the operations of the institution. Girls were taught to read and write, attending school just as children would. In addition to basic school subjects, inmates were taught how to cook, care for the kitchen, plan and serve meals, sew, cane chairs, weave rugs, and launder clothes. The farm provided sustenance for the young women, growing crops, raising livestock, and preserving food. In 1919 the institution’s farm produced 18,247 quarts of milk, 1,453 dozen eggs, 1,389 pounds of fresh pork, and 8,703 pounds of carrots.

Of those women brought to the House of Refuge, 47 were committed for vagrancy, 20 for immorality, 14 for petit larceny, five for habitual intoxication, three for adultery, two for manslaughter, and one for bigamy. Upon their arrival they were examined by a physician, 73 of those women treated for cases of syphilis, 24 with menstrual disorders, 21 with gonorrhea, and 17 with tonsillitis. A dentist and oculist were also on call to examine the women, to which 215 teeth were filled during the year and an additional 280 teeth extracted. Nearly 50% of the women were between the ages of 16 and 18, 73 were Protestant, 29 were Catholic, and 1 was Jewish, while 92% of the inmates were native-born citizens.

The transition from Miss Curtin’s conservative ideologies to Mrs. Daniel’s more progressive mentality created a rift on the Board of Managers. After Miss Grinnell’s dismissal in 1919, Gov. Charles Whitman initiated an examination of the institution based on accusations of incompetency. Aurilla Desmond, a former matron, testified that Daniels was lax in her management and frequently traveled away from the institution. A farm worker, who resigned his position the year prior, claimed that his departure was in part due to the poor conditions of the facility.

It was later determined that Mrs. Daniels had expressed concerns about Miss Grinnell’s shortcomings to the Board of Managers, including an accusation that she played the phonograph on Sunday (which Grinnell did not deny). These shortcomings were used as grounds for dismissal. Upon further investigation, the NYS Senators charged with the investigation determined that the true issue at the House of Refuge was the considerable amount of friction between the Managers and the Superintendent, to which the former should be replaced in its entirety.

Miss Grinnell, a former school teacher in West Barre, later found employment at the Rome Institution for Feeble Minded Children. An Orleans County native, she was buried in Mt. Albion Cemetery after her death in 1928.