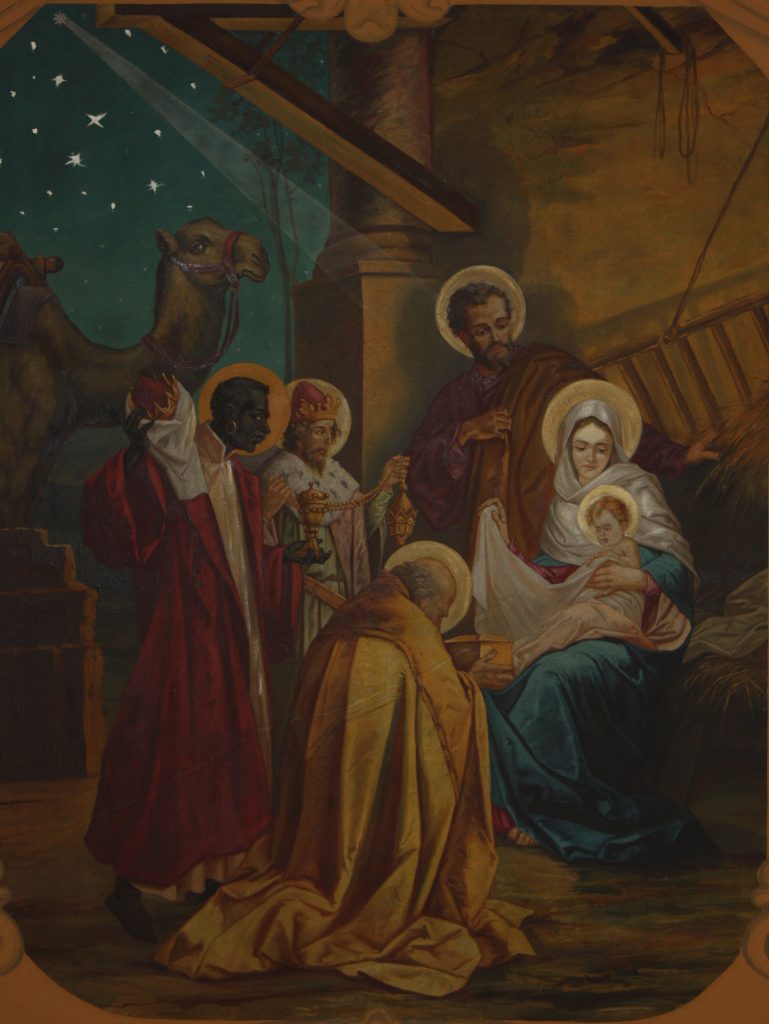 During the holiday season, I often think back to the years I spent as a young boy, enjoying Christmas with family and friends; simpler times. The memory that remains fresh in my mind is Christmas Eve Mass at St. Mary’s Assumption on Brown Street in Albion. We would walk down the street to church and visit with parishioners, young and old, before walking to my grandmother’s house for Christmas dinner. I always remember being enamored with the beautiful artwork that adorned the ceiling of the nave, but at that time I had no idea of the significance of the paintings, who completed the work, or what the paintings depicted. I am sure the question of how an artist managed to paint on such a high ceiling was the predominant thought circling in my head.

Starting in the 1930s and continuing through the 1940s, the Polish Catholics in Albion realized as they neared their golden jubilee that the interior of the church was in need of considerable improvements. The sanctuary was relatively plain in comparison to the churches in the “old world,” many which were beautified with murals and statuary inside and out.

It is believed that Rev. John Hrycyna sought out Jozef Mazur, the renowned ecclesiastical painter of Buffalo, to complete artwork in the sanctuary of the church including murals of the Virgin Mary, the Binding of Isaac, and the Meeting of Abraham and Melchizedek. Polish priests throughout Western New York were familiar with Mazur’s abilities as his first major sacred project consisted of the interior paintings at Buffalo’s St. Stanislaus Bishop and Martyr, the mother church of Polonia.

It was later confirmed through financial receipts that Marion Rzeznik, another ecclesiastical painter from Buffalo, completed the six murals that adorned the nave of the church sometime after Mazur completed his work in the sanctuary. These men would have considered themselves “rivals” of one another, but the parish sought continued assistance from both artists over the coming years to complete additional work and touch up existing murals. Perhaps one of the most beautiful murals is Rzeznik’s “Adoration of the Magi,” the second of three murals situated on the southern portion of the nave.

The particular image depicted by Rzeznik is that of the Epiphany and is one that is rooted in traditional, late medieval representations. The representation of the Magi as “Kings” was the product of the Christian writer Tertullian, who was the first to refer to them in this manner. In more traditional works, the men were dressed in Mithraic robes and Phrygian caps, symbolic of their roots as astrologers of the Persian court.

Here we see Caspar, the eldest, kneeling with his gift of gold, representing Jesus as King. Balthazar, represented as the African brings a gift of myrrh, foreshadowing Christ’s eventual death. Melchior, the youngest, presents his gift of frankincense as a representation of Christ’s divinity. The three men are often depicted in a manner which represents the three known parts of the world during the medieval times; Europe, Asia, and Africa.

This mural and others completed by Rzeznik in St. Mary’s Assumption were some of the last remaining examples of these particular subjects. The mural of the Blessed Virgin Mary, completed by Mazur, was painted in the likeness of Mazur’s wife. That particular mural was painted over after the building was sold.