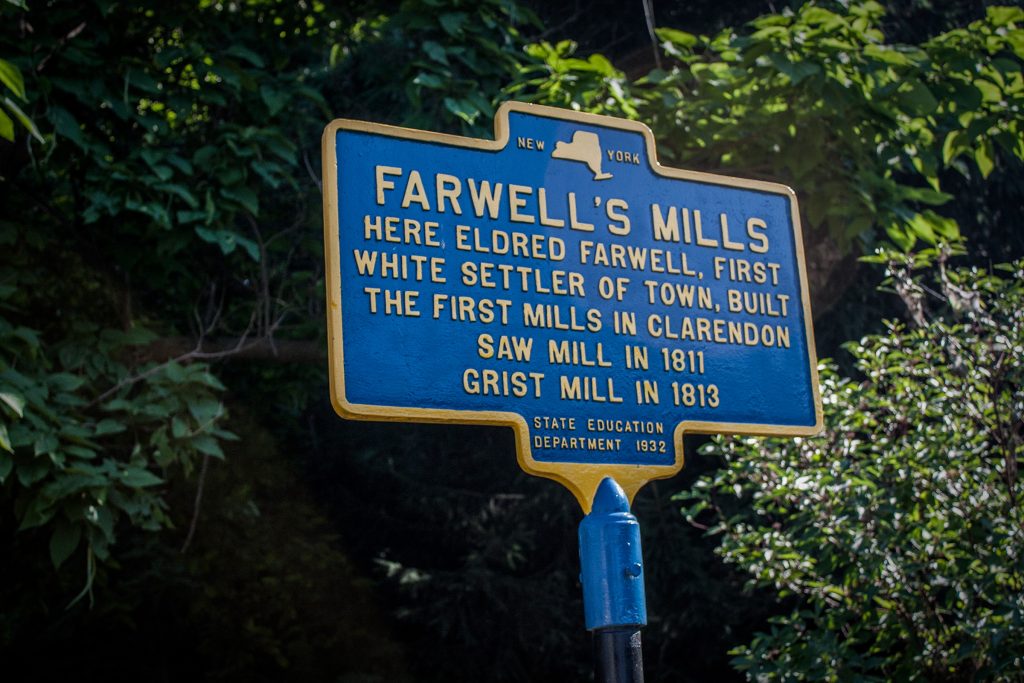 Of the New York State Historic Markers erected by the NYS Department of Education, the overwhelming majority cover locations deemed significant to the earliest history of Orleans County including Native American and pioneer sites. The marker situated at the Town Park on Holley Byron Road in Clarendon calls attention to one of the earlier settlements in our area.

Perhaps this is a detail that would only concern Farwell himself, but his contributions to the early settlement of Clarendon are also duly noted within the pages of these books. Born to William and Bethel Eldredge Farwell on March 6, 1770 at Charlestown, New Hampshire, Eldredge settled in the vicinity of Clarkson along the Ridge Road. From other publications, we know that his brother Isaac settled nearby to the west of the Ridge Road and Lake Road intersection in the same location.

As so many historians have recorded, the story of Clarendon’s foundation occurred by happenchance after the unfortunate escape of Isaac Farwell’s horse around 1810. Following the animal’s trail along the bank of Sandy Creek, it is said that Eldredge stumbled upon a waterfall and while recognizing its potential for power, decided that he should settle the area. Farwell purchased approximately 210 acres the following year and relocated his wife and five children to the area in the spring of 1811. With that acreage upon which the beautiful waterfall sat came the mill privilege, providing him with the opportunity to construct a grist mill on the site.

In the unsettled wilderness of Orleans County, the role of the mill owner was one of significance, prestige, and prominence. Grist millers held the key to survival, providing an invaluable service to settlers who needed to grind corn and wheat into flour. Settlers could travel west, east, or south to “nearby” locations to grind their grains, but trips to these areas were marred by unimproved roads, swamps, and waterways without bridges. The convenience of a local miller, of course, was preferred and Ambrose Ferguson was hired to labor in the mill at the astonishing rate of $20 per month.

Farwell’s establishment of a grist mill in 1811 followed by a saw mill in 1813 provided a significant amount of political capital to the 43-year-old pioneer. When the town held early elections for the position of supervisor, he was selected by his neighbors to the post. He operated the first post office at the location then known as “Farwell’s Mills,” which his sons later assisted in delivering mail to Byron Center by horseback when the stagecoaches operated between Rochester and Buffalo. He was later selected as a judge in the court of common pleas and from that point on was known locally as Judge Farwell.

When William Morgan disappeared in 1826, presumed to have been kidnapped and murdered by Masons, a series of trials took place in Orleans County involving local men accused of participating in the conspiracy. Elihu Mather, brother of Gaines pioneer James Mather, was accused of driving the carriage carrying Morgan through Orleans County. The exhaustive process of selecting unbiased jurors resulted in Judge Farwell’s participation in the defense’s challenge of Stephen Martin as a potential juror. According to Farwell, Martin had expressed an opinion of guilt, telling him explicitly that the masonic institution was corrupt, that Morgan was forcibly carried by carriage along Ridge Road, and that Morgan was most certainly in the carriage driven by Mather. The testimony resulted in Judge Addison Gardiner setting Martin aside as a juror.

The site on which this marker sits was donated to the Clarendon Grange in 1940 by Morris Brackett, Chief Game Protector of the NYS Conservation Department and a descendant of Farwell.

Erratum: Volume 4, Issue 2 noted that B. T. Roberts was removed from the pulpit of the Methodist Church in Albion – Roberts was living in Albion and relocated to Pekin, NY, but did not serve as pastor of the Albion Methodist Church. A huge thank you to Pastor Randy LeBaron for the correction!