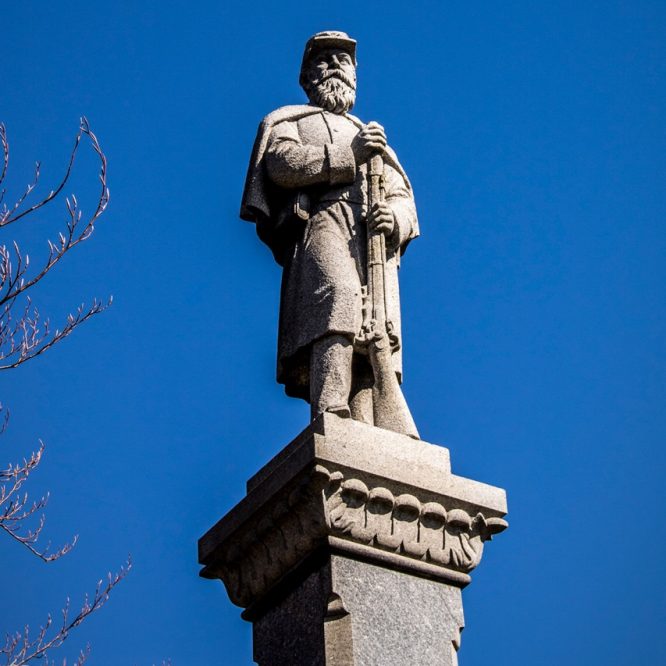 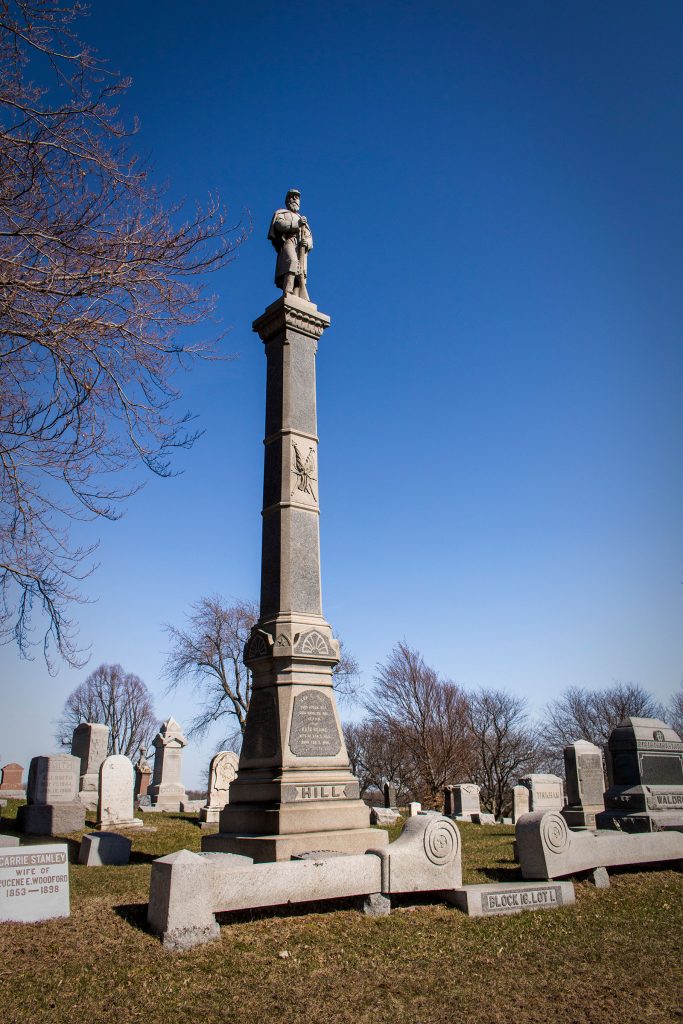 Our rural communities are filled with strikingly beautiful landscapes and recognizable landscapes scattered throughout the region. As I passed through Millville this week, I thought about one of my favorite “little” landmarks in Shelby, a cemetery marker that has always grabbed my attention since I first visited Millville Cemetery.

The stone is rather remarkable, aside from its overwhelming appearance, towering over the seemingly smaller stones placed around it. Rarely does an attractive statue such as this adorn the burial site of an individual and perhaps its location in a rural cemetery makes it all the more unique. Yet the story of Asa Hill, the man memorialized by the granite obelisk and stoic soldier standing guard, adds a degree of mystery to the stone itself.

A native of Shelby, Asa Cummings Hill was born August 19, 1837 to William and Clarissa Miller Hill. When the South seceded from the Union in April of 1861, Asa found himself drawn to military service like so many other local men as indicated by his enlistment on November 14, 1861. Over a month later on December 22nd, he was mustered into service as a private with Company D of the 28th New York Volunteer Infantry along with a number of other men from Medina.

Of the four shields that adorn the base of Hill’s monument, the southern face notes his service, stating that he was wounded in action on August 9, 1862, captured, and sent to Libby Prison before his eventual exchange and discharge from service on January 13, 1863. A detailed description of an enlisted man’s service carved upon his headstone surely indicates a closer connection to his service than might appear on the surface. With that curiosity, I thought it worthwhile to peruse the pages of C. W. Boyce’s A Brief History of the Twenty-Eighth Regiment New York State Volunteers, which highlights the unit’s service and what transpired on August 9, 1862.

On that date, Union and Confederate forces converged upon a location known as Cedar Mountain, often called Cedar Run by the Confederates and occasionally referred to as Slaughter’s Mountain after a nearby landowner. This particular morning was exceptionally hot, as Sgt. William Lewis recalled, upwards of “100° to 109° in the shade,” and Union forces were told to hold their position in the face of oncoming artillery fire and light skirmishing. Following an impromptu conference between commanding officers, it was decided that the available units should advance upon the Confederate battery in an effort to capture it. As Union artillery was poised to direct fire upon a section of woods occupied by the enemy in advance of the attack, Gen. Nathaniel Banks prematurely commenced movement of his troops.

Sgt. Lewis, the color-bearer for the 28th New York, led the charge with fixed bayonets at double quick and immediately after the advance commenced, “the entire line was met with a murderous fire from the front and also from the right flank…” The men of the 28th New York had encountered the 2nd, 3rd, 4th, and 5th Virginia Infantry under the command of Gen. “Stonewall” Jackson. It was during this advance that men encountered “…a most desperate hand to hand conflict,”  suffering the loss of 17 of the 18 officers and 196 of the 339 enlisted men, either killed, wounded, or captured. It was during this engagement that Col. Edwin F. Bowen of Medina was shot in the arm, the bone shattering to pieces and requiring amputation.

In the months following the engagement, a report appeared in the New York World on October 21, 1862, listing casualties from conflicts in the previous months. It was noted in this report that Pvt. Asa Hill suffered an amputated right leg as the result of wounds sustained during the engagement at Cedar Mountain. It is difficult to discern exactly when the procedure was undertaken to remove Hill’s leg.

A single man who relied upon his physical strength to conduct business on his farm, Hill returned to his family’s home on Sanderson Road in Shelby with an overwhelming injury that he would never recover from. With Asa’s father William passing in 1868, the family relied upon hired men to assist in caring for the farm including William Mull, Joseph Schindelmyer and Asa’s nephew, William Hill. As a disabled veteran, he was entitled to a pension, which he applied for in 1866, and the eligible bachelor eventually married Catherine Bodine in 1878. The couple welcomed a son, Asa Bodine Hill on January 15, 1879, and Asa passed two years later on April 25, 1881, at the age of 43.

In the years following Asa’s passing, newspapers reported on the beautification that was taking place at Millville Cemetery, drawing attention to the “…soldiers monument to Asa Hill.” It was noted in a subsequent correction that Hill’s monument was paid for by his widow, Kate, after his passing without any assistance. What is unique about the statue that adorns the peak of this monument is the form of the soldier. Although many monuments to area soldiers are crafted as a “stock” representation of a man, the soldier atop Hill’s monument is carved in his likeness – there is no monument like it anywhere else. 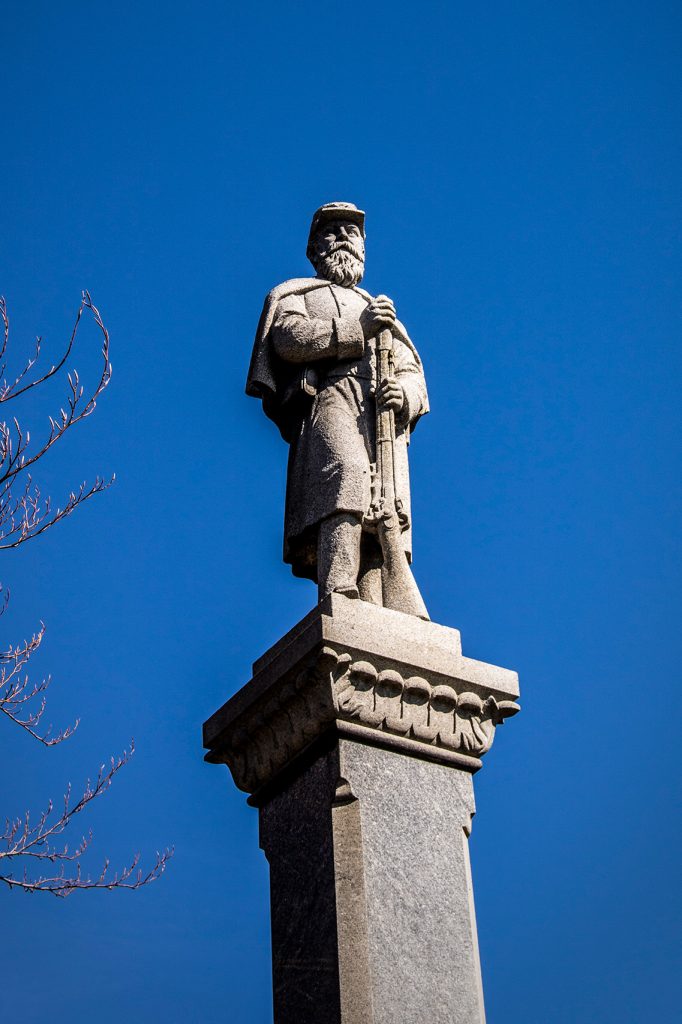 Hill stands atop this granite obelisk, wearing a great coat and topped with a forage cap. It is possible that a portion of the musket barrel broke off as the musket’s length would have extended to the shoulder of a soldier of average height. Packed under his right elbow is his cartridge box, he stands with a rifled musket grasped firmly in his hands and appears to gaze off into the distance as if to watch over the family’s farm. The statue is carved with exquisite detail as the lock plate, hammer, trigger, and sling are clearly visible. Perhaps most interesting about this representation is that the statue shows no sign of his physical disability as a result of the war, indicating that the representation depicts Hill before the Battle of Cedar Mountain. He rests the weight of his body on his left leg, the right leg slightly flexed. It is likely coincidental that it was his right leg that was amputated and not an effort by the artist to symbolize his eventual injury.