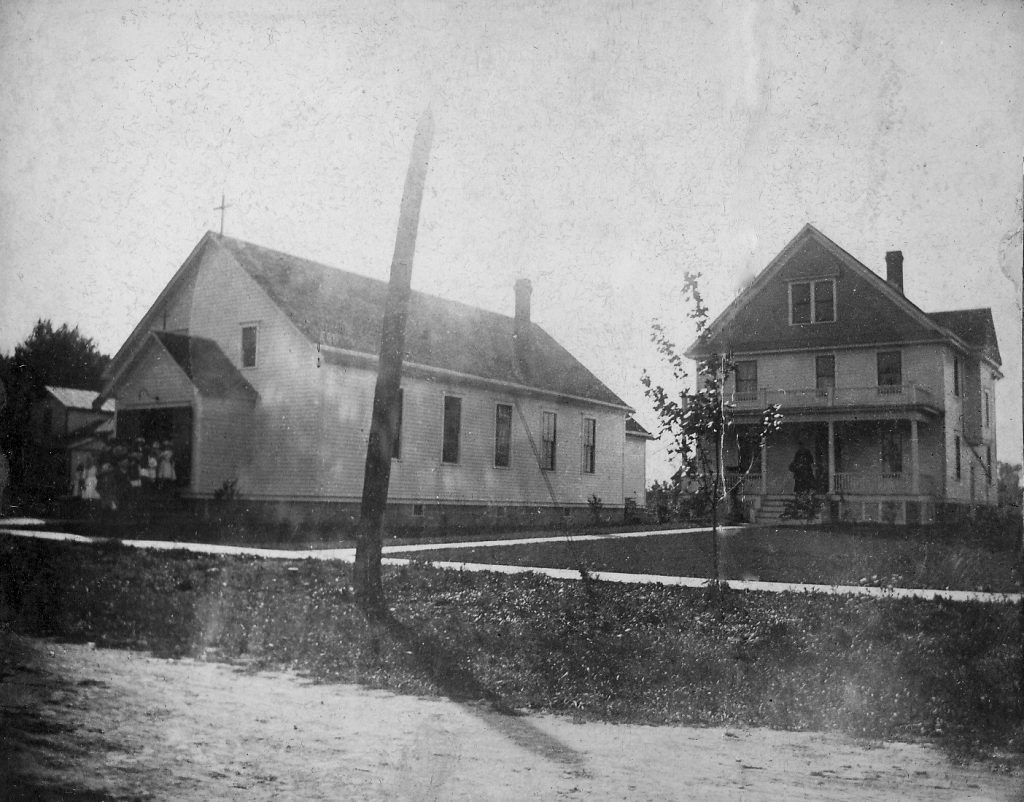 Shortly after starting my tenure as County Historian in 2015, I wrote a short piece about a photograph of Sacred Heart Church given to me by Mary Ann Tillman of Albion. I stumbled upon the photograph again this week and thought that perhaps my initial article on the subject was rather short, lacking a more detailed account of the earliest years of the parish.

In the early 1970s, Helen Allen compiled a thorough record of historical accounts from various churches throughout Orleans County. She notes that Medina’s first Polish settlers came to the area in the early 1880s in search of work within the area’s sandstone quarries and factories. Facing language and cultural barriers, the growing community lacked a space for meeting their spiritual needs so local Poles attended St. Mary’s Church until a priest was available to say Mass in their own language.

Ks. Stanislaus Bubacz (Ks. or Ksiądz, meaning priest or clergyman), then the rector of Assumption of the Blessed Virgin Mary Church in Albion, recognized the need for Polish communicants to practice in their own language and organized a Mission at Medina. According to Medina Historian Cecilia White, Bubacz visited Medina every Sunday and “conducted services in a Commercial Street residence owned by Wincenty Wysocki.” The community was encouraged to appeal to Bishop Charles Colton to establish a parish for the congregation.

On February 1, 1910, Bishop Colton appointed Ks. Tomasz Gwodz as the first resident priest and tasked him with establishing the parish and constructing a church. Construction of the wood frame structure began in the spring of 1910 and finished during the summer of the same year. On August 7, 1910, at 9 o’clock in the morning, Mass was celebrated in the new building and High Mass celebrated at 11 o’clock. In October of 1910, Msgr. Nelson Baker, who attended in place of Bishop Colton, formally dedicated the church. K.S. Jan Pitass of Buffalo, the father of Buffalo’s Polish community, celebrated the Mass following the dedication ceremonies. Ks. Wojcik, Ks. Burtkowski, Ks. Bubacz, Ks. Gwodz, Rev. O’Brien, and Rev. Malloy were also present.

The choir from Assumption of the Blessed Virgin Mary in Albion sang the Mass and the men from the St. Joseph and St. Stanislaus Societies participated in the program. A large delegation of men, accompanied by two bands, escorted the officiating clergy to the church where hundreds of people crammed into the new edifice. Those who were unable to secure a seat in the church participated in the service from the front lawn of the property.

Ks. Adalbert Cichy arrived in 1912 to replace Ks. Gwodz, the former initiating a two-week Mission over Christmas and the New Year to “raise the spiritual and moral standards of his parishioners.” In 1925, Ks. Charles Mioduszewski petitioned the Franciscan Sisters of St. Joseph to establish a parochial school for the young congregants of the parish. The parish purchased a convent and constructed a schoolhouse prior to the arrival of the Sisters in December of 1925 and school commenced on January 2, 1926 with 62 pupils taught by two Sisters. It was during this time that parishioners recognized the need to improve their house of worship and bricked over the church edifice, the rectory, and the school. Roofs were replaced, new heating systems, plumbing, and lighting were added and the parish debt continued to grow. As a result, the congregation made few improvements until 1975 under the pastorate of Rev. Msgr. Marcinkiewicz when he initiated the repair of bricks, replacement of roofs, and repainting of the buildings.

Unfortunately, an arsonist destroyed the sanctuary of the church in 1981, requiring nearly two years of remodeling. In 2008, the Diocese of Buffalo closed the church and merged the parish with St. Mary’s of Medina and St. Stephen’s of Middleport to create Holy Trinity Parish as part of the Diocese’s Journey in Faith and Grace program.

This particular photograph shows the original church edifice of Sacred Heart of Jesus R.C. Church in Medina, located at the corner of Ann and High Streets. The children of the parish are gathering on the front steps of the church and the appearance of white dresses suggests that it was a First Holy Communion celebration. It appears as though the priest is standing on the porch of the house, which served as his living quarters.