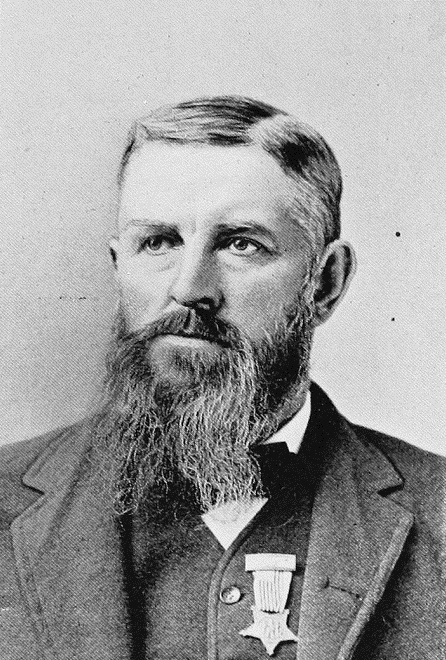 Ziba Roberts was born July 31, 1840, near East Shelby to Ziba and Susanna Wolcott Roberts. This image, which appears within A Brief History of the Twenty-Eighth Regiment New York State Volunteers by C. W. Boyce, shows Roberts in his mid-50s. Pinned upon his chest is the medal of the Grand Army of the Republic, typically worn by members of the fraternal organization. Roberts was an active member of the S. J. Hood Post GAR in Medina, serving as the organization’s commander and chaplain.

Nearly seven months after the Confederate attack on Ft. Sumter, Roberts enlisted with the 28th New York Volunteer Infantry on November 11, 1861, at Rochester; he was placed with Company D with other men from Orleans County. During the Battle of Winchester on May 25, 1862, the 28th New York faced a force of Confederate troops nearly four times greater in size under the command of Gen. Stonewall Jackson. As a result of the engagement, 62 men from the 28th were captured and Ziba Roberts was one of nine from Company D.

The men captured at Winchester were marched to Lynchburg, Virginia, a nine-day journey consisting of two days without rations. According to Roberts’ dairies, upon his arrival to the prison camp outside of Lynchburg, he sold his revolver to a soldier for Illinois for $7.50; clearly the enemy soldiers were lax in their searching of prisoners of war. A number of newspaper accounts published much later state that Roberts was held as a prisoner for 2 ½ months before his parole. Records suggest that he was held prisoner for nearly 3 ½ months before his parole on September 13, 1862, at Aiken’s Landing, Virginia. A number of other men from the 28th New York, who were captured at Cedar Mountain, were also sent to Lynchburg and paroled on the same day.

William Lewis, the regiment’s color bearer, wrote an account of his participation at the Battle of Cedar Mountain found within the pages of A Brief History of the Twenty-Eighth Regiment. In that account, he references a particular interaction with Pvt. Roberts during the engagement:

“…Now, you will excuse an old soldier, who has a spark of fun in his makeup, if he stops here and tells a joke. Ordinarily people would say this was no place for fun. Comrades falling all around us, both dead and wounded; but even under such circumstances funny things occur, which remain in memory, causing laughter years afterwards. We had a fellow in our company named Ziba Roberts, six feet tall, and broad according. A soldier that could stand behind him was pretty safe from rebel bullets. As we were charging across that field under and extremely heavy fire from the enemy, all standing as close to the ground as possible, I must confess, Ziba calls out, ‘By gorry, boys, I feel too tall to-day.’ But Ziba was an excellent soldier, and never known to shirk his duty. We went on, drove the rebels from their hiding place and through the woods…”

Of course, Mr. Lewis was mistaken, because Ziba Roberts was already in Lynchburg by the time the 28th was at Cedar Mountain. It is very possible that this recollection occurred during a different engagement.

Following the war, Ziba returned home where he married Cynthia Dewey of Royalton on January 13, 1867, at the Baptist Parsonage in Shelby Center. In the mid-1870s he built a house south of Millville and lived out the remainder of his life in that vicinity until his passing in 1928. That home remained in the family until the 1970s when it was sold to a couple in Batavia. Unfortunately, the beautiful structure was set ablaze and completely destroyed by a mischievous, local young man in 1977.