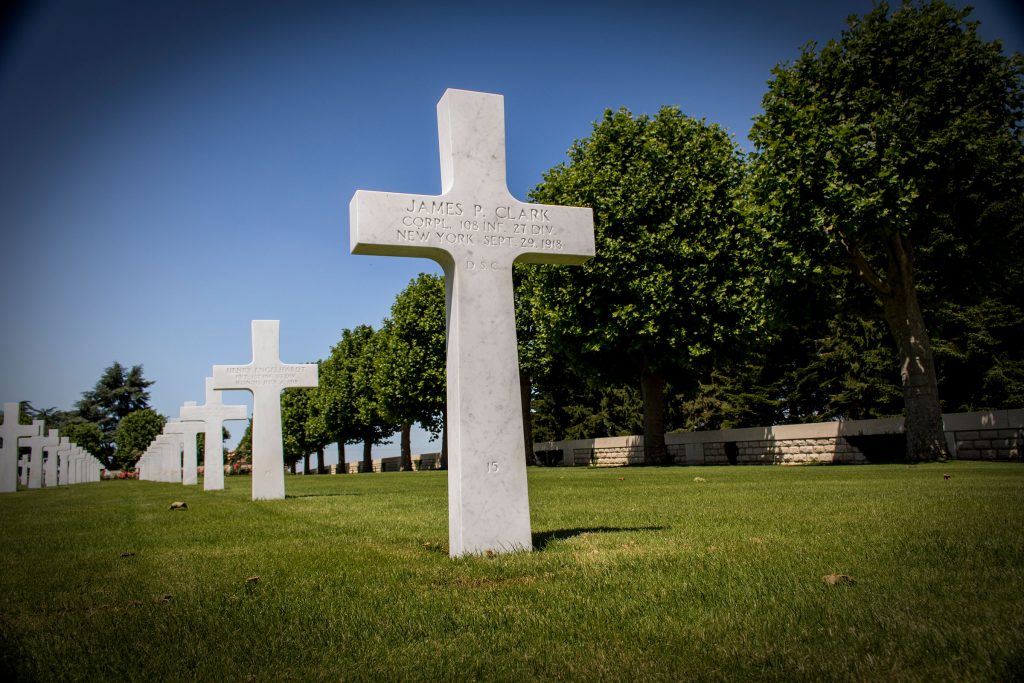 Amidst the commotion of political malfeasance, the excitement of football season, and the stress of a new school year comes the centennial of the Meuse-Argonne Offensive. The massive campaign initiated on September 26, 1918 marked the beginning of the end for Imperial Germany. Over 1.2 million American soldiers participated in the advance that spanned the nearly 50 days leading up to the Armistice of November 11th.

Over the last three years, I have authored numerous pieces on the men of Company F who marched across the fields of the embattled French countryside. All of that research culminated with the opportunity to stand upon the hallowed ground that refused to release the bodies of so many young men. Now that 100 years have passed, a little interest has stirred up locally in an effort to commemorate this monumental anniversary.

The afternoon of September 27, 1918 arrives as the men of the 108th prepare to march from bivouac camp at Ronssoy, France to the trenches along the front lines. A hasty eight and a half mile march is met with a brief pause just west of Templeaux le Geurard before the remaining six miles are covered by night. The enemy is aware of all troop movements and the regiment is met by heavy shelling and concentrated gas; Medina-native Frank Bloom (Kwiatkowski) is killed by a bursting shell.

Approaching the trenches, the men are placed in line with 2nd Battalion under the command of Capt. John S. Thompson. Although zero hour is set, the officers withhold details of the impending advance from their soldiers and sleep is sparse as the men contemplate the inevitability of the coming days. The clock strikes 5:50am on September 29th and shelling begins from 23 brigades of British light artillery and 10 brigades of British heavy artillery. The shells fall in front of the trenches and a creeping barrage commences, slowly advancing in increments of 100 feet with 4 minute pauses in between. Over 100 machine gun units open fire as the brave men of Medina crawl forth from the trenches under the encouragement of fellow soldiers.

An enemy counter-barrage begins to fall across the lines of advancing men, cutting many down in the initial seconds of the advance. In commencing the attack, the men of 2nd Battalion charge across open fields to swing their line parallel to 3rd Battalion on the left. Enemy machine gun fire halts early progress, which is met with bayonets and hand grenades. It is during this action of outflanking German machine gun nests that James A. Sheret is killed. Pressing forward, men drop as they advance in the face of flying bullets and falling shells.

The unit moving under the code name “Tumo,” presses forward with no reports to Headquarters in the early hours of the advance. By 11:00am, reports arrive at HQ indicating that 2nd Battalion of the 108th is on their objective south of Bony, engaging on the main defenses of the Hindenburg Line. Winded from the rapid advance upon the position, progress is halted as 2nd Battalion approaches a thick entanglement of barbed wire. Heavy enemy fire slows progress and cuts down countless officers and non-commissioned officers during which Cpl. James P. Clark assumes control of his platoon. Leading his men against the enemy, fewer than 200 men are able to move upon the wire:

“This was done with a recklessness, valor and determination that proved irresistible. They rushed forward in small groups and as individuals, through the wire, through passes existing in the wire, and in some cases over the top of the wire where it was very thick, all through a heavy pall of smoke.” – John F. O’Ryan

Nearing 1:00pm the battalion solidifies its position in Bony, but finds itself co-occupying the village with enemy troops. The unit repulses several counterattacks throughout the afternoon and into the evening. One of the first groups to reach the impenetrable Hindenburg Line, Medina’s boys fought bravely and suffered severely.

Cpl. James P. Clark, a twenty-year-old native of South Dakota who enlisted with the 3rd N.Y. National Guard in April of 1917. His two older brothers, Leslie and Seth, both followed suit and joined in June of the same year. Cpl. Clark was killed by a machine gun bullet nearly 20 minutes after assuming control of his group after all other officers were either dead or wounded. As John S. Thompson later wrote, “The barrage laid down by the enemy tore up the ground around the men and the noise was deafening.” Clark was awarded the Distinguished Service Cross for his gallantry exhibited during the deadly advance and is prominently marked upon his marble cross at the Somme American Cemetery in Bony, France.