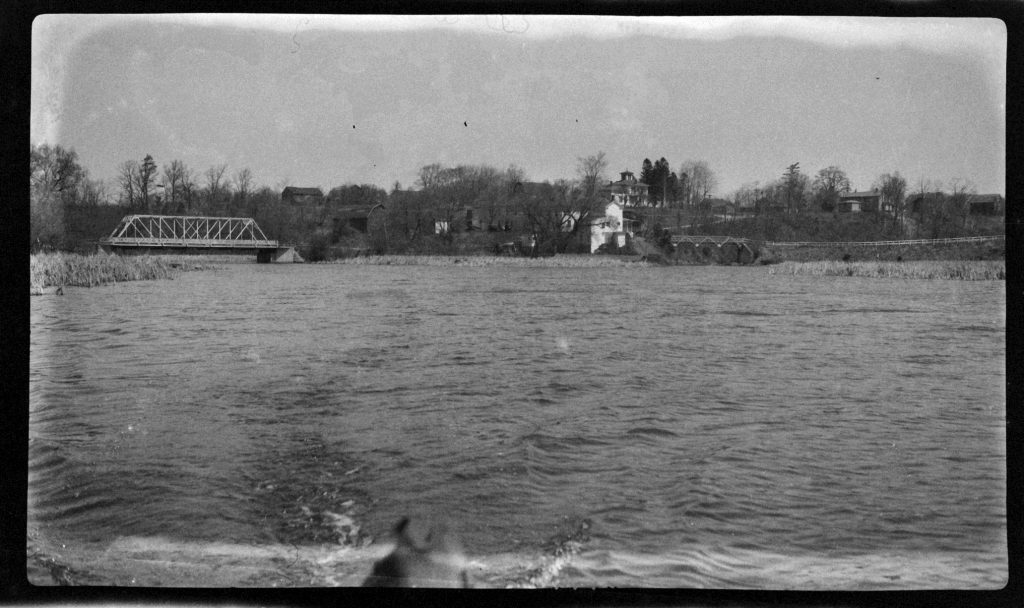 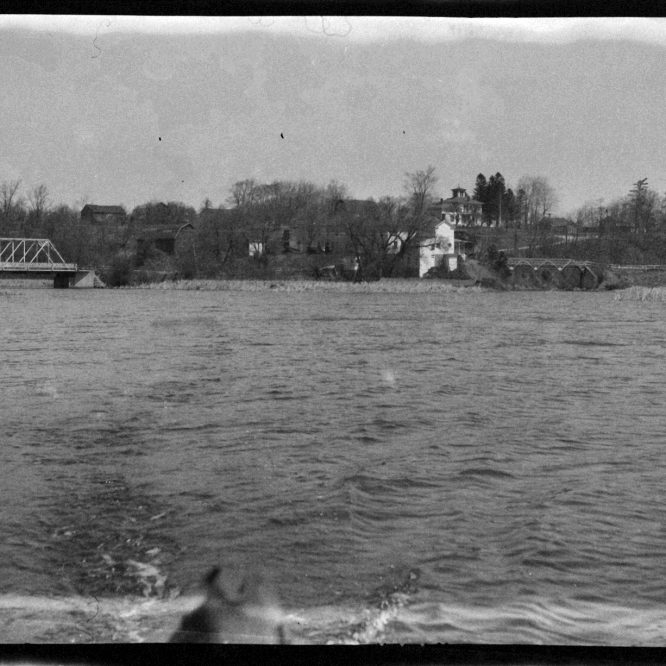 While digging through a box of negatives, I discovered this image of the Oak Orchard River and Marsh Creek from the 1920s. Absent from the photograph is the Route 18 bridge that crosses over the Oak Orchard, so at this point in time the little hamlet pictured here was known as “Two Bridges.” Thinking about the origin of names, a letter within the Department of History’s files provides some insight into the source of the Oak Orchard name.

The letter, addressed to Samuel C. Bowen of Medina, is from Arthur C. Parker, the Secretary Treasurer of the Society of American Indians (and grand-nephew of Gen. Ely S. Parker). In the letter, he writes “Albert Cusick the Onondaga authority defines Ti-ya-na-ga-ru-nte creek as “Where-she-threw-a-stick-at-me,” which was the label for a river to the east of Johnson’s Harbor. Parker offers an alternative name for the creek; “two-sticks-approaching” from the Seneca name “Da-ge-a-no-ga-unt.” This name is recorded in other records, along with “Skano-dario,” the Mohawk word meaning “beautiful lake” and the origin of the name Ontario. It should also be noted that the Tuscarora gave this creek the name “Ken-au-ka-rent.”

Capt. Pierre Pouchot, the commandant at Ft. Niagara sometime between 1755 and 1757, labeled the Oak Orchard as “Riviere aux Boeufs,” which roughly translates to “Beef River” or Buffalo River. This name was shared with the French River near Buffalo, which was subsequently changed to Buffalo Creek while our Riviere aux Boeufs became “Oak Orchard Creek.”

Orasmus Turner, in his history of the Holland Land Purchase, notes that the first road opened in this area was surveyed by the Holland Land Company in 1803 and ran from Batavia to the mouth of the Oak Orchard. At this natural harbor, Joseph Ellicott anticipated the birth of a bustling port city called Manilla which never came to fruition. Earlier records of this location as indicated by Turner, suggest the name of the harbor as “Tonawanda Bay.”

Although there is no indication that the Oak Orchard was ever called Tonawanda Creek, an interesting correspondence between Aaron Burr and the Holland Land Company suggest that pre-1800 maps labeled the harbor as Tonawanda Bay. Poised to purchase a tract of land, Burr noted that his survey contained an indented bay, which was considered public land, and therefore should not be included in his $1.50/acre bill for the land. The lack of documentation of a purchase of said tract suggests that Burr and the Holland Company were unable to agree on this particular matter.

Despite these older references, the term Oak Orchard appears in documents as far back as the early 1810s as surveyors prepared a path for the Erie Canal. The name Oak Orchard itself has a logical origin story. It is believed that upon the arrival of the first settlers to the present township of Carlton, a large grove of oak trees grew upon the banks of this creek and resembled, in some ways, an orchard; thus Oak Orchard.

In October of 1913, a meeting gathered at Pt. Breeze with the purpose of addressing the term “creek.” A committee of Dr. Richard Bamber, Virgil Bogue, and H. L. Brown was placed in charge of pursuing a geographical name change with the U.S. Government. The following month the Orleans County Board of Supervisors passed a resolution following suit, forwarding the resolution to the U.S. Board of Geographic Names, U.S. Senators from New York, and Congressmen in the hopes “…that they use their influence to effect such change in name.” The resolution proposed that the Oak Orchard Creek become the Oak Orchard River, in the hopes that the term “river” would attract more attention when seeking federal aid for improvement projects. The U.S. Department of the Interior still recognizes the name Oak Orchard Creek.