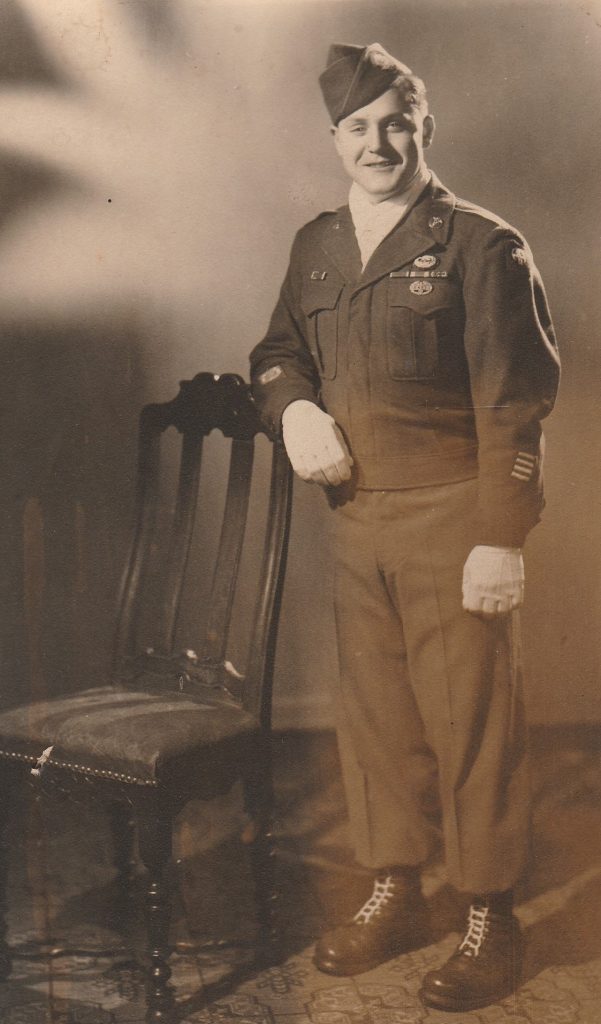 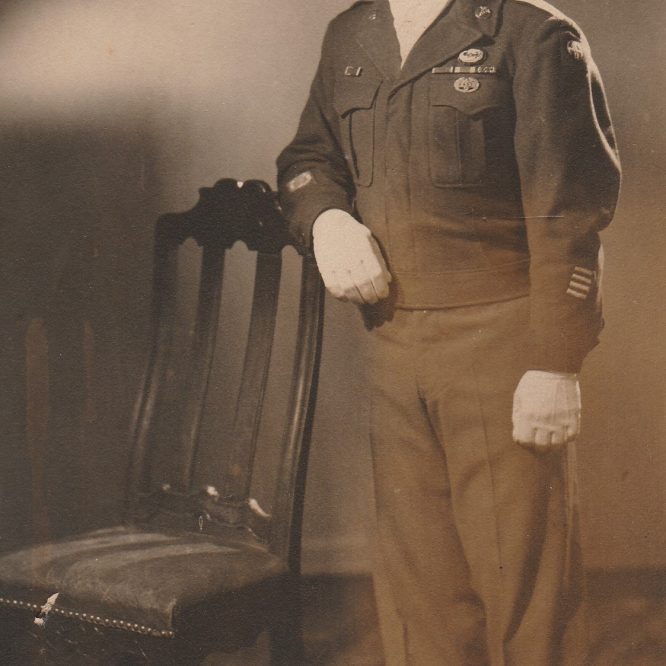 This year marks the 75th Anniversary of the D-Day Landings, which took place on June 6, 1944. The passing of this particular milestone serves as grim reminder that our veterans, particularly those who served during World War Two, are disappearing quickly and with them passes the stories of their service. While the Orleans County Legislature commemorated this anniversary on May 22, I received a note from Graydon Owen containing two photographs and a brief write-up of his father’s service during the war. I found Kenneth Owen’s story to be quite interesting and thought it should be shared with the community.

Kenneth Richard Owen was born in the Town of Shelby on September 15, 1924, the son of George and Cora Rock Owen. Upon reaching the age of 18, he enlisted with the U.S. Army on May 21, 1943, which assigned him to Fort Bragg, North Carolina. As a new recruit, he volunteered for service with the 82nd Airborne Division, the first division of its kind in the history of the U.S. Army, and commenced training with the unit. Kenneth’s first jump with the unit came in July of 1943 when Allied forces utilized parachute regiments to assault Sicily; his second jump came two months later with the assault on Salerno in September of 1943.

As Supreme Allied Command prepared for Operation Neptune, the largest amphibious operation in modern history, the 82nd Airborne prepared for “Mission Boston.” Nearly 6,500 paratroopers jumped from over 350 C-47 aircraft at 1:51am, June 6, 1944. Between the 101st Airborne and 82nd Airborne, the latter experienced fewer landing mishaps including fewer missed landings, minus the 508th Parachute Infantry Regiment (which included Medina native James Campas). The overall mission of both divisions was to land on the Cotentin Peninsula and block German progress towards Omaha, Utah, Juno, and Sword beaches.

Owen was a medic with the 82nd Airborne, suffered a sprained shoulder when he landed in the early hours of June 6, and was taken prisoner soon after. German soldiers stripped him of his gear, including food and medical supplies that would have allowed him to treat his injuries. For two days, they kept him without food while he suffered the effects of his injuries. On the third day, Owen attempted an escape, crawling under barbed wire and wading through three-foot-deep water. Despite being shot in the leg by his captors, he managed to find his way to the home of two French women who provided him with food, milk and wine. He was then taken to the home of an elderly French woman who provided him with money to make it back to U.S. troops.

When Allied forces pushed through the area, Owen was rescued and sent to a hospital in England where he received appropriate medical care. Remarkably, he was present with the 82nd Airborne in September of 1944 for Operation Market Garden in an effort to seize several roads and bridges of strategic significance. He remained with his unit through December of 1944, when the 82nd Airborne fought on the frontlines during the Battle of Bulge.

According to his son, Kenneth returned to Medina after the war where he married Marion Anna Maxwell. Ken worked at Abex Corporation for nearly 30 years, retiring in 1985 and remaining in Medina until his death in 2012. Graydon and his wife wrote, “Ken never spoke often or publicly of his war experiences, except, occasionally with his sons and grandsons. But, he always remained devoted to and proud of his military history. Ken kept this time of his life close to his heart. This is the first public telling of his personal story.”