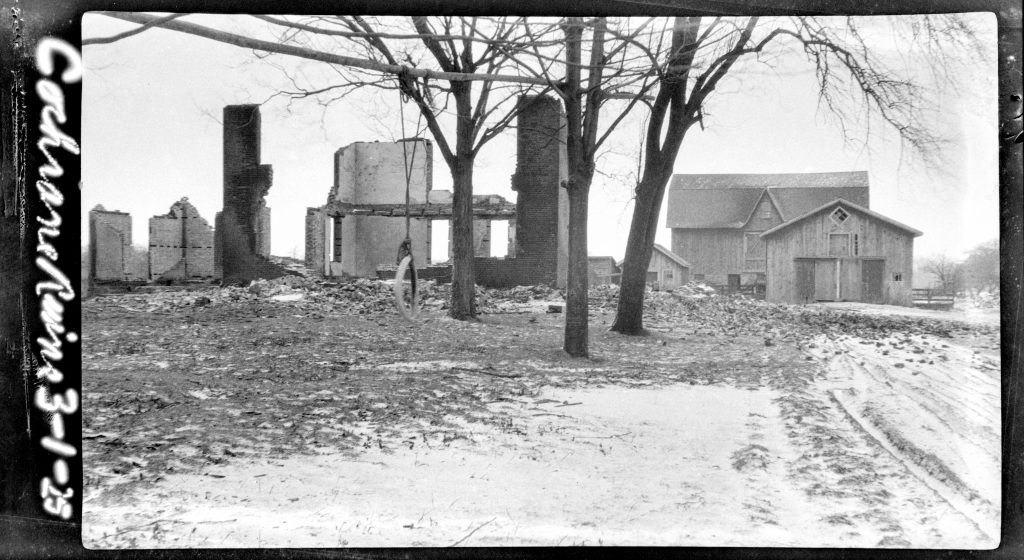 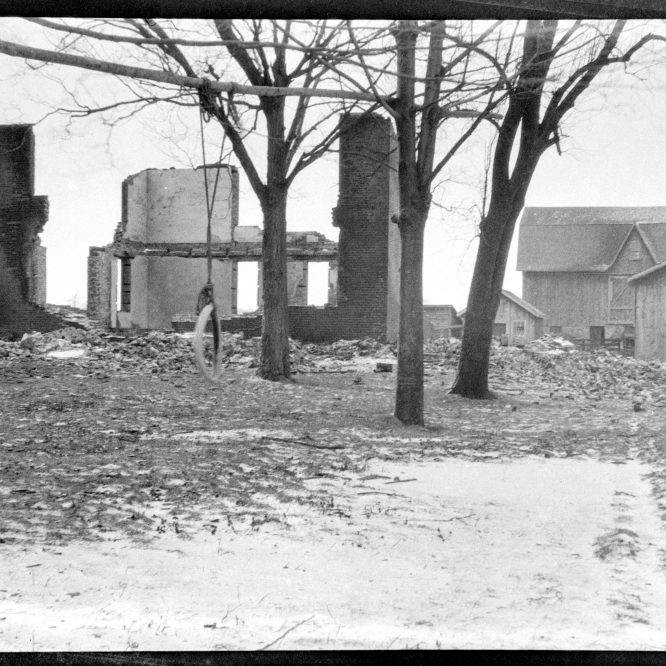 This photograph, taken March 1, 1925, shows the ruins of the brick home once belonging to Dr. Samuel and Helen Church Cochrane. The farm was located just south of the Village of Albion and consisted of a house and several barns. On February 28, 1925, a catastrophic fire tore through the stately brick house then occupied by Stanley Zwienski and his family. The 75-year-old structure was a complete loss as the fire, starting in the chimney, caused over $3,500 in damage.

Built around 1850, the property was eventually purchased by Dr. Cochrane after he relocated from the Town of Yates. Although Cochrane became a well-respected physician in Albion, his wife was the only daughter of Judge Sanford E. Church. According to local lore, young men from across the county lined up to court the young belle and at one time she was the “most eligible” bachelorette in Albion. The community was quite surprised when Cochrane emerged as the successful suitor.

Although Dr. and Mrs. Cochrane were already deceased at the time of the fire, Dr. Cochrane was plagued by fires throughout his life. In 1897, his home in Yates caught fire after a lamp exploded, leaving him with a hefty bill under partial insurance coverage. In 1910, after Dr. Cochrane passed, this house caught fire but was extinguished before extensive damage occurred.

Visible in this photograph is a small henhouse situated on the front left corner of the largest barn. In November of 1925, just eight months after the brick house burned, the body of Harvey Doubleday was discovered inside this chicken coop. Doubleday, a well-known Western New York racehorse trainer, was permitted by the property owner to sleep in the barn during the summer months. Coroner Eccleston believed Doubleday’s death came as a result of hear failure, but local papers reported that “Doubleday’s body lay exposed to attacks of swarms of carnivorous rats for nearly a week,” making an exact cause of death difficult to discern. It also demonstrates the local newspapers’ willingness to publish all details of these particular types of stories.