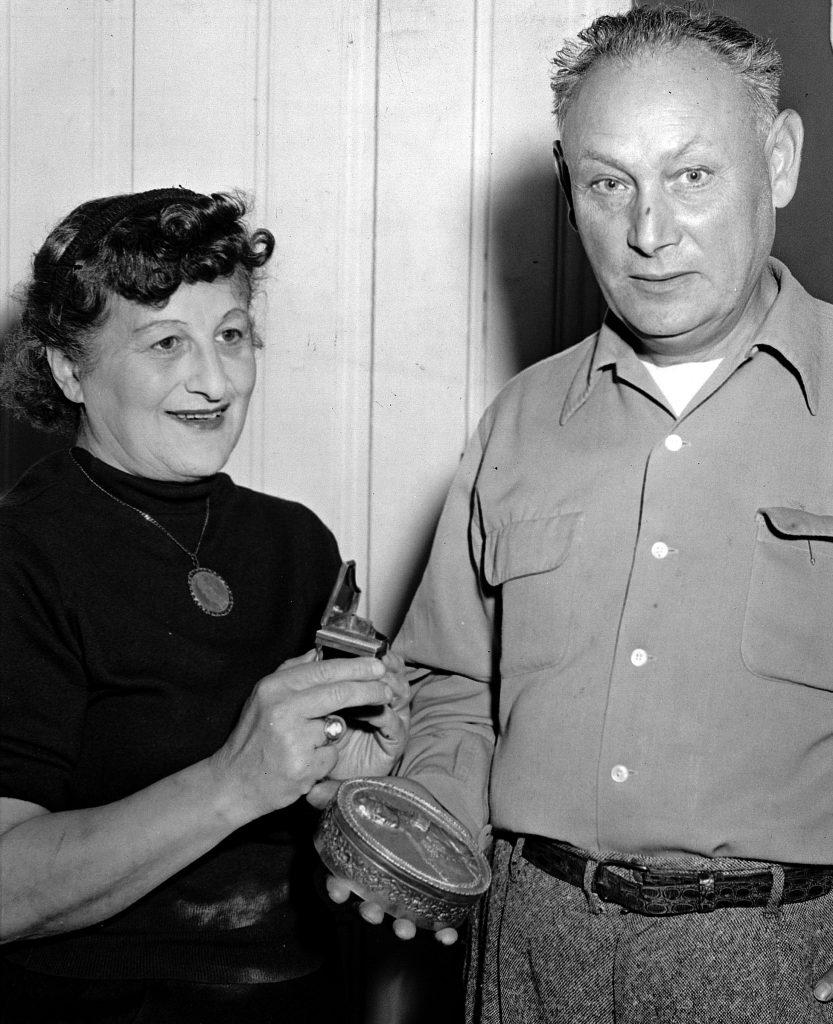 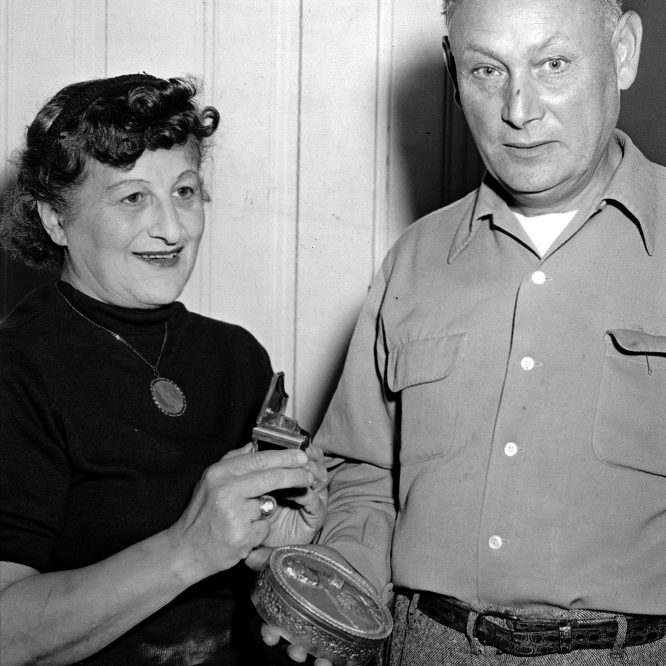 This photograph appeared in the November 22, 1956, issue of the Rochester Democrat & Chronicle under the headline “U.S. Truly Land of Opportunity, Say Ex-Hungarians Now Citizens.” The couple, in their early 50s, are holdings trinkets brought to the United States after their escape from the People’s Republic of Hungary. Standing on the right is Benjamin Baruch Brown, born March 12, 1903, at Fehergyarmat, Hungary as Benoe Braun. On the left is his wife, Barbara Brown, born April 9, 1904, at Fehergyarmat, Hungary; her given name at birth was Piroska. The couple wed on November 13, 1948 shortly before their departure from Hungary.

Benjamin Brown was known locally for his 430-acre farm located on Roosevelt Highway in Carlton, about 2.5 miles west of Two Bridges. Brown purchased the initial acreage from Ed Archbald, a property known locally as the Miller Farm, and later added acreage from the Lyell Kenyon Farm and the Myron Grehlinger Farm. He used half of the acreage for cherry and apple orchards while tomatoes, cabbage, and cucumbers occupied the remaining land.

In Hungary, Brown grew apples exclusively on a 96-acre farm known as Nagymezo, or “Big Meadow” in English. He later told a Democrate & Chronicle reporter, “[Communists] took everything, equipment, supplies, land, you had to just walk off and leave everything. And they didn’t pay you a penny for it, either. If the owner didn’t just disappear during the transaction he was just lucky.” An employee and active member of the local Communist Party informed Brown that the Hungarian government planned to send him to Russia to study collective farming. Upon completion, Brown was to return to Hungary and supervise a government farming program.

Benjamin and Barbara immediately fled their home on July 30, 1949, just days before the Communists assumed full control of Hungary. The Browns relied upon friends and the kindness of strangers to smuggle them out of Budapest, through Czechoslovakia, and into the U.S. controlled zone in Austria. Once in Austria, the couple travelled to the United States, arriving at the Port of New York on January 13, 1950. In total, they paid three smugglers $1,300 for the journey and shipped heirlooms and other personal belongings (including those in the photograph) to the U.S. by way of Americans and soldiers.

The Rochester Democrat & Chronicle reported, “The Browns are mighty proud of their new country, and they said they wish they could tell the American people how much they appreciate a country where they could be received as they have, be given the opportunities provided them, and to effect the rehabilitation that they have experienced during the last six years. They initiated steps towards citizenship soon after their arrival and now are full-fledged naturalized citizens of the United States.” The article featuring the Browns appeared in the Democrat & Chronicle in the weeks following the Hungarian Revolution of 1956. Soviet military forces entered Budapest on November 4, 1956, to suppress a massive revolt against the Communist government, resulting in the deaths of more than 2,500 Hungarians.