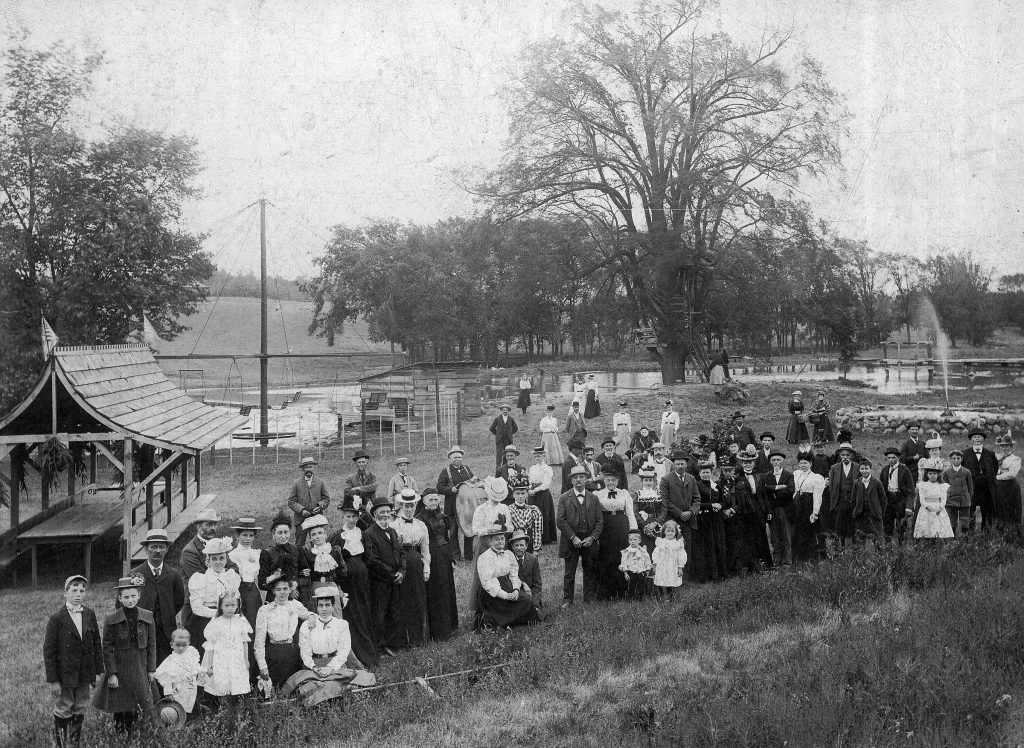 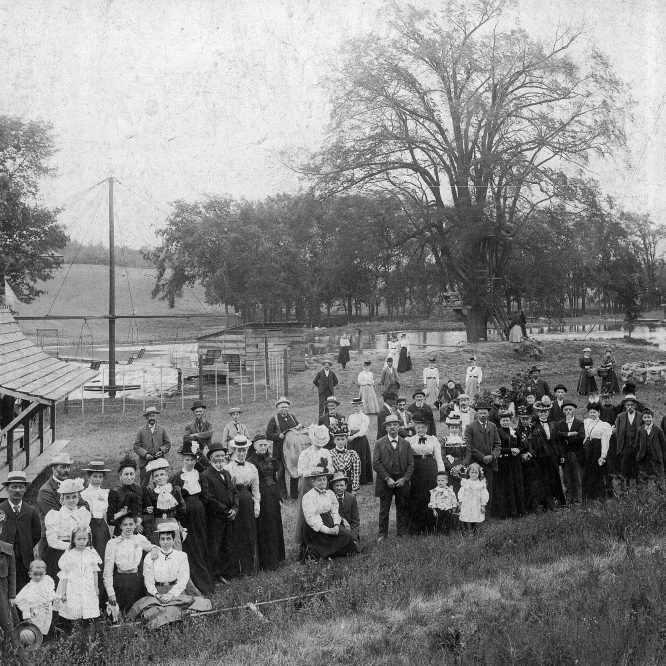 Occasionally, I receive notes from readers about suggested article topics of local interest. A few months ago, a copy of several Medina postcards arrived at my doorstep relating to Elm Park north of the village. It seems as through the origin of the park and its exact location remain somewhat mysterious.

Elm Park was known locally for its scenic location along the Oak Orchard River, providing a gathering place for congregations, Sunday school groups, family reunions, and other local organizations. This particular photograph was taken around 1900 and is labeled on the reverse, “Elm Park Medina, N.Y. donated by Florence Waters – Probably a group from Knowlesville.” Some features of the park, visible in the photograph, include a covered picnic table with folding wood benches, a small boathouse with canoes, a fountain, and a set of swings that appear to spin over the water. Also visible in the image is a small cascade in the river, which helps with identifying the location.

The park itself was allegedly named for the large elm tree pictured in the background. The owners of the park built a playground into the massive tree, which became a focal point of the picnic grounds. An interesting article in the Ithaca Daily News from June 4, 1906, called the location “Bowentown” after Ambrose Bowen who settled the heavily forested area. The article continues on to say that the hamlet was intended to become a stop on the Medina & Darien Railroad, a defunct endeavor that ran from 1834 to 1836 and relied upon horsepower to pull cars between Darien and Medina.

An 1860 map of Orleans County shows a natural pool in the Oak Orchard River just south of Slade Road. A small roadway is shown between North Gravel Road and the River just north of the pool. According to the map, the location was known as “Oak Grove.” The map also shows numerous buildings in the vicinity belonging to A[mbrose] Bowen, a G[rist] Mill, a S[aw] M[ill], and B[lack] S[mith] shop, in addition to a store owned by Bowen. This is confirmed by a 1860s advertisement for a millstone company that listed Ambrose Bowen’s mill at Oak Orchard Creek near Medina. An 1856 New York City newspaper lists Bowen as a dealer in Hereford cattle at Oak Grove, Medina. It would appear from the map and supporting information that the natural pool south of Slade Road was the location for Elm Park, a little further north from its supposed location near Glenwood Lake. A small cascade is still situated at that location, even though the creation of Glenwood Lake has altered the River slightly.