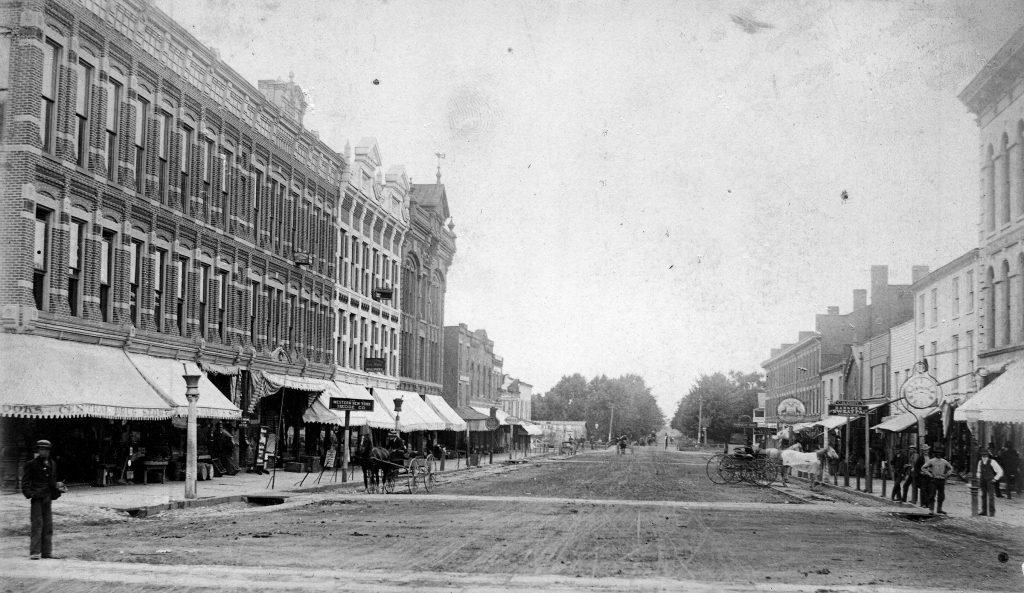 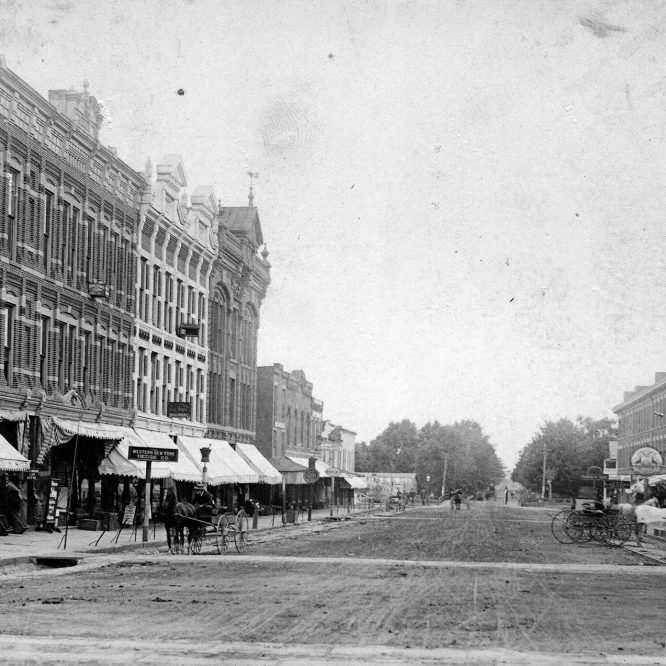 This photograph, taken some time in the late 1880s or early 1890s, shows Main Street in Albion looking north from Bank Street. Comparing this image to a current view of the village, readers will notice very few changes in the cityscape of downtown Albion. The only marking on the obverse side of the photo is the photographer, Francis J. Burnett. The approximate date of 1886-1893 is deduced by the appearance of a large wooden sign that reads “Western New York Hedge Company.” Organized in 1886 by Dwight Beckwith, the WNY Hedge Company encouraged local farmers to plant hedgerows between fields rather than using wooden fences. The short-lived company failed soon after around 1893.

Two village directories, one from 1887 and the other from 1894, provide a detailed look into life in Albion nearing the turn of the 20th century. The most notable feature of this image is the wide unpaved street. Sidewalks and curbing are all cut from locally quarried Medina sandstone and paving blocks run across the street at various locations to prevent pedestrians from soiling their shoes. Horses and buggies, the predominant method of transportation, are visible along the street. The attentive observer will notice the presence of hitching posts lining the sidewalks and the abundance of “road apples” scattered throughout the street, both indicative of equine transportation.

Businesses lined the streets of late-19th century Albion, providing residents with ample opportunities to purchase a variety of goods at specialty shops. On the left side of this image, awnings are pulled down over the storefronts of George W. Barrell’s Central Drug Store and James Bailey & Son’s Grocery Store. The mortar and pestle atop a four-sided post near the intersection of Main and Bank streets draws attention to the drug store. A small sign adjacent to Bailey’s Grocery Store reads “Law Office,” directing visitors to attorneys with offices on the upper floors of the Swan Block. The 1887 and 1894 village directories indicate that John Cunneen, Dean Currie, John G. Sawyer, and George Bullard all had offices in the upper floor of that building. Slightly visible lettering on the windows of the second floor advertise Oscar Eddy’s Insurance Agency as well.

Traveling north along the west side of the street, the image shows G. H. Sickels & Co. dry goods store with the awning retracted, followed by Franklin Clarke’s drug store, Landauer & Strouse’s dry goods, the Rochester Cash Store, and Lyman Root’s grocery store. Signs projecting from the upper floors of these blocks advertise the meeting rooms for the Ancient Order of United Workmen (labeled as Select Knights No. 3, Orleans Legion), the Grand Army of the Republic, and a millinery business operated by Lizzie Griswold. The Pratt Block, occupied by Lyman Root on the first floor, was occupied by his wife Emma Root’s millinery shop. The third floor, of course, was occupied by the Opera House. Further up the street is a sign that reads “Bakery” situated outside of Ben Franklin’s confectionary and bakery business followed by Henry Onderdonk’s furniture store and Guy Merrill’s hardware store.

Turning our attention to the east side of the street, several men have gathered around the large pocket watch advertisement in front of the Empire Block. Although difficult to read, the name H. W. Preston appears on the watch face. Hiram Preston’s jewelry store is just out of sight, although the store’s white awning is visible in the image. Another sign calls attention to Charles H. Eddy’s harness shop. Located in the “Grover Block,” Eddy shared space with John Kane, a boot and shoe salesman and Jay Sweet, who operated a drug store. The next stretch of buildings included a liquor store and brandy distillery operated by Palmer & Briggs, and George Waterman’s hardware store, which operated out of Andrew Wall’s Gothic Hall. This particular building stands out due to the presence of its gabled roof facing the street.