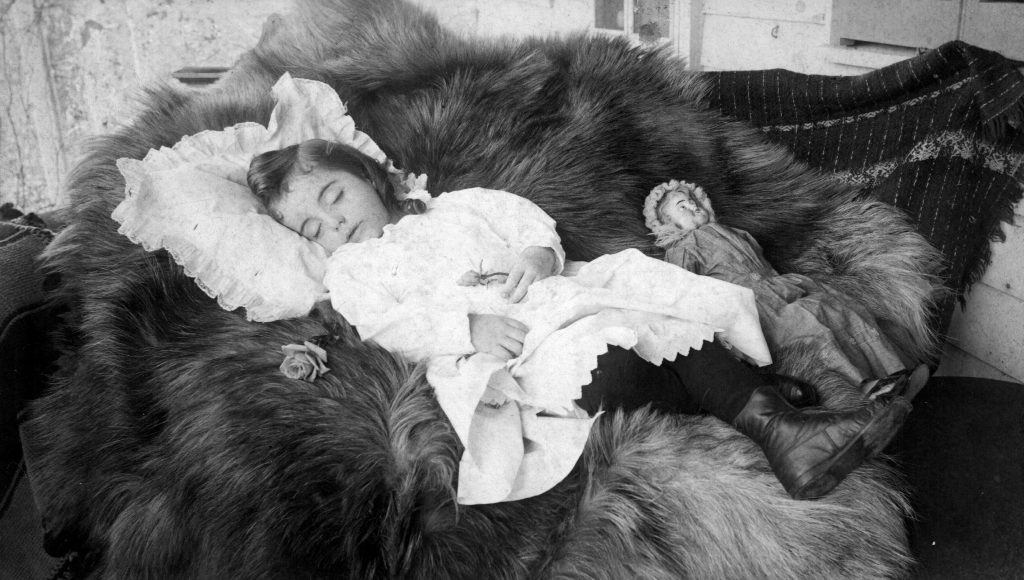 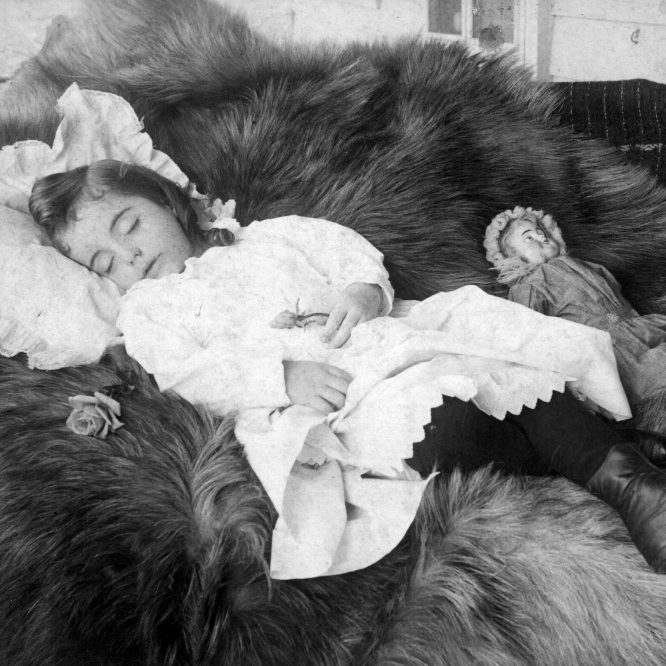 Popular during the Victorian era, post-mortem photographs provided family members with an opportunity to capture a lasting likeness of their deceased loved ones. In this particular case, a young child passed before his parents could arrange a formal studio portrait. The boy is peacefully posed on a fur blanket on the front porch of the family’s home in Yuba City, California, holding a rose in his left hand with another laid beside him.

The appearance of the child may seem peculiar given his clothing and hairstyle. Breeching remained a common practice through the late 19th century. As infants, boys often wore dresses that covered their legs down to their feet which made ambling difficult. Once they began walking, these knee-length dresses allowed the child to walk while facilitating easy toilet training. After toilet training was complete, the boy went through the “breeching” process at which point he was dressed in trousers for the first time. This represented a very important rite of passage for a young man.

Tracy Bogue, pictured here, was born in December of 1889 to James Tracy Bogue and Clara Worden. James, the brother of Virgil Bogue, operated the Batavia Nurseries in Genesee County with his brother Nelson until moving to Hillsdale, Michigan in the early 1880s. A sufferer of asthma, James hoped the change in climate would improve his health. After several years in that location, he and his family returned to Batavia where he remained until his condition worsened. He relocated his family to Yuba City, California where he operated one of the largest nurseries on the west coast. Among his many accomplishments, he is credited with promulgating the Phillips Cling Peach and the California Red Plum.

This particular image is one of two post-mortem photographs found in an album recently donated to the Department of History by Tom Phillips of Batavia. The other photograph shows Tracy’s older sister, Grace, who died on March 19, 1892, just two weeks after Tracy’s death. A death notice, which calls attention to the suffering experienced by Mr. and Mrs. Bogue following the untimely passing of both children, suggests that croup was the cause of death. James and Clara Bogue returned to Albion on August 19, 1892 to bury their children in the family plot located at Mt. Albion Cemetery.