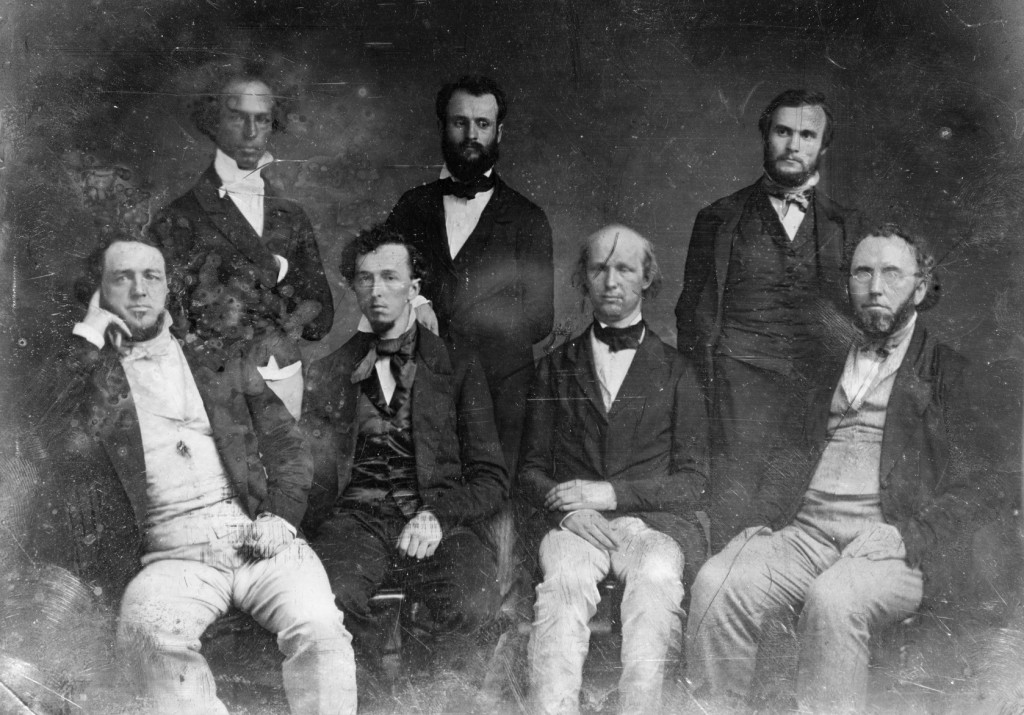 The annals of local history are filled with the names of influential citizens who were either born here or lived here before moving beyond the political boundaries of our area to establish themselves on a much larger scale. One such man was Charles Anderson Dana, a name that few would recognize today.

This daguerreotype from the 1850s taken by Matthew Brady shows the staff of the New York Tribune. Seated left to right are George M. Snow, Bayard Taylor, Horace Greeley (once owner of the Ward House in Childs), and George Ripley. Standing left to right are William Henry Fry, Charles Anderson Dana, and Henry J. Raymond.

The son of Anderson Dana and Anna Denison, Charles A. Dana was born on Aug. 8, 1819 at Hinsdale, New Hampshire. At a young age, Charles was brought to Orleans County with his siblings where his father accepted a position as the overseer of a canal warehouse at Gaines Basin.

After several years of operating the site, Dana sought to establish himself locally on a small farm. With our knowledge of the area, it is very likely that Charles Dana received his earliest education at the Gaines Basin log schoolhouse where a young Caroline Phipps would have taught classes at the age of 14.

Unfortunately, the untimely death of Anna Dana on Sept. 7, 1828 left Anderson with four young children to care for. Anna was laid to rest at the burial ground in Gaines and the children were sent to Vermont where they were divided up amongst the living relatives. After spending time on the farm of his uncle, David Denison, Charles was sent to Buffalo where he worked at the store of another uncle, William Denison, until the business collapsed during the Panic of 1837.

With $200 in his pocket, Charles enrolled at Harvard University where he studied for two years. Upon the completion of his second year, he was forced to leave school due to poor eyesight and a lack of funds. Not soon after, an acquaintance offered Dana a position as City Editor of the New York Tribune. That acquaintance was none other than Horace Greeley, who would find his own connection to Gaines during the mid-1800s.

In 1849 Dana became a proprietor of the Tribune and was made managing editor, a position he would hold for over 10 years. After the outbreak of the Civil War, he was responsible for running the headline, “Forward to Richmond! Forward to Richmond!” which is credited with spurring Union troops forward into the Battle of Bull Run.

Following the Union defeat, Greeley suffered a nervous breakdown and Dana was forced to resign from his position in 1862.

After the war, Dana was able to raise the necessary funds from prominent Republicans in the New York City area to establish The Sun, which published its first paper on Jan. 27, 1868. Over the next several decades, The Sun became a polarizing publication focusing heavily on maladministration and the unscrupulous behavior of the nation’s biggest politicians. Dana remained in control of The Sun until his death on Oct. 17, 1897.