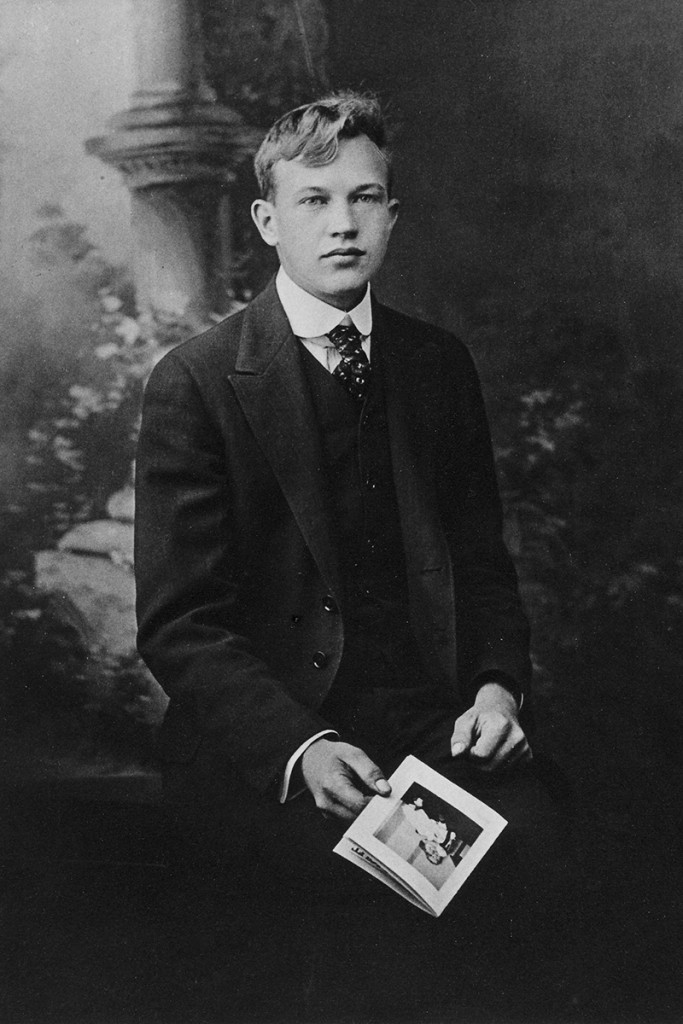 This image shows John D. Brush, Sr. taken in 1916 as a senior at Albion High School.

The son of Dwight M. Brush and Eva Gill, John was born at Albion, NY on November 5, 1897. His father and grandfather, John E. Brush, engaged in the Pop Manufacturing and Bottling business on Moore Street in the 1880s and early 1890s. His father took control of the lease for the Exchange Hotel at 123-125 North Main Street around the time of John’s birth, operating that business until his untimely death in December of 1906. It was for this reason that John was forced to provide for himself starting at the age of nine.

John Brush graduated from Albion High School with the Class of 1916 and eventually completed studies at St. Lawrence University in 1922. He attended the Theological Seminary at St. Lawrence University, graduating in 1923. In 1918, John enlisted with Company C of the 338th Tank Battalion but saw no service overseas due to the Armistice of November 11th of that year. Following his short time in the service and his studies at St. Lawrence University, John began his ministerial service. Rev. Brush spent several years as the minister of the Church of Good Tidings in North Weymouth, Massachusetts and the Universalist Church of Norwood, Massachusetts before returning to Western New York in 1930.

It was the intention of John Brush to explore business opportunities in Rochester, to which he approached his brother-in-law, Willard Punnett, about engaging in safe box manufacturing. Punnett had already inherited a successful business from his father, Byron Punnett, and a partnership was established under the name of Brush-Punnett Co. in 1931. Formulated around the concept of a safe produced with stamped parts to cut down on production expenses, Brush and Punnett delved into the manufacturing business amidst the Great Depression. Income was nearly non-existent and orders had all but dried up when Punnett called it quits, turning his part in the company over to Brush.

Two years later, a timely order from Vassar College for 2,200 wall safes provided enough business to allow Brush a weekly salary of $10. By 1937, he was making roughly $50 per week, which amounted to a salary equivalent to that of his ministerial wages. The 1930s proved to be a time of great difficulty, sacrifice, and hardship. It was thanks to the commitment of his wife that the family was able to pull through the tribulations of the ‘30s. A large order from Eastman Kodak in 1943 paired with the conclusion of the Second World War meant that the hardships of the last ten years were now behind him.

With the eventual entrance of his sons John Jr., Richard, and Robert into the business, the company developed into the John D. Brush & Co., Inc. in 1955. Operating under their flagship brand SentrySafe, John’s grandsons Doug and Jim would later purchase the controlling interest in the company. In July of 2014, the company was purchased by Master Lock Co. for a staggering $117 million, bringing an end to one of Rochester’s better-kept secrets.