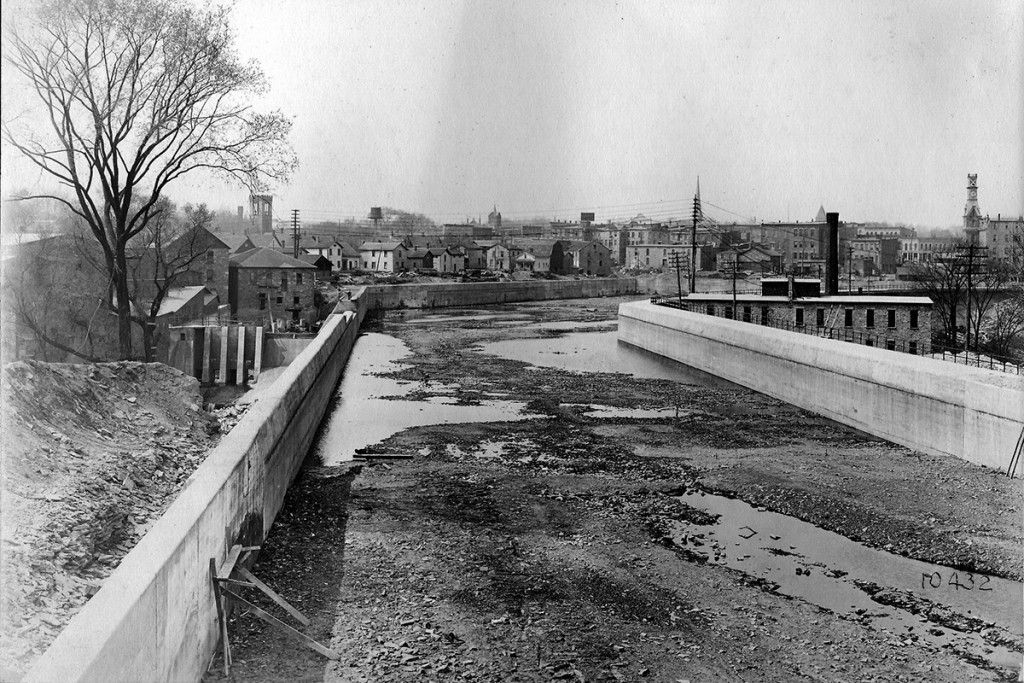 On July 4, 1817, New York State embarked on a crusade to complete the greatest feat in the history of modern engineering; a 363 mile ditch from Albany to Buffalo aimed at connecting the Atlantic Ocean with the Great Lakes. Eight years later this expansive project was completed and welcomed a vast number of packet boats and mule teams to its tow path. Improvements focused on repairing leaks and widening the canal began almost immediately in order to accommodate the flood of shipping traffic.

It was in 1903 that New York State authorized the redevelopment and massive expansion project that would turn the Erie Canal into the “Barge Canal.” Starting in 1905, this massive undertaking required thirteen years to complete and cost New York taxpayers nearly $100,000,000. The 82 locks located along the miles of canal prism covering 565 feet worth of elevation shifts represented an outstanding accomplishment for State engineers, but the expansive projects undertaken as part of Contract Number 65 in the western section of Orleans County was one that could easily rival any prior achievements.

This image, taken on April 26, 1915 from the Laurel Hill Bridge, shows the Medina Canal Terminal looking west towards downtown. In the foreground, the newly completed aqueduct and retaining walls stand as a testament to the hard work of both man and machinery. One of the more noticeable landmarks, the White Hotel, stands in the background to the right.

This portion of the 1905-1918 expansion was completed in 1914-1915 and represented 76% of the total project covered in Contract No. 65. A 1.5 cubic yard Hains mixer with a 300 cubic yard gravel bin mixed the concrete, which was then transported by one of three steam locomotives to sites as far west as Glenwood Avenue.

Nine guy derricks were used to pour the concrete into wooden frames and set in layers to prevent the weight of the mixture from collapsing the framework. This system was responsible for pouring the nearly 57,000 cubic yards of second grade concrete and more than 1,600 cubic yards of reinforced concrete used to build the retaining walls, waste weir, and aqueduct.

More impressive is the fact that all of this concrete was set during the off-season to prevent any disruptions to traffic. This meant that special precautions were put in place to ensure the mixture did not freeze while setting. Paired with the inability to block or divert the Oak Orchard creek during the construction of the aqueduct, this span of the Canal would have proven quite difficult to complete. New York State spent a total of $776,670 to complete the work that year, mostly between the Prospect Street and Laurel Hill Bridges (now Bank Street).

The Orleans County Department of History has nearly 500 photographs of the Erie Canal in Orleans County taken between 1913 and 1930 showing various aspects of the contracts. Approximately 100 of these can be seen at www.orleanscountyhistorian.org/erie-canal and more will become available in the coming weeks.