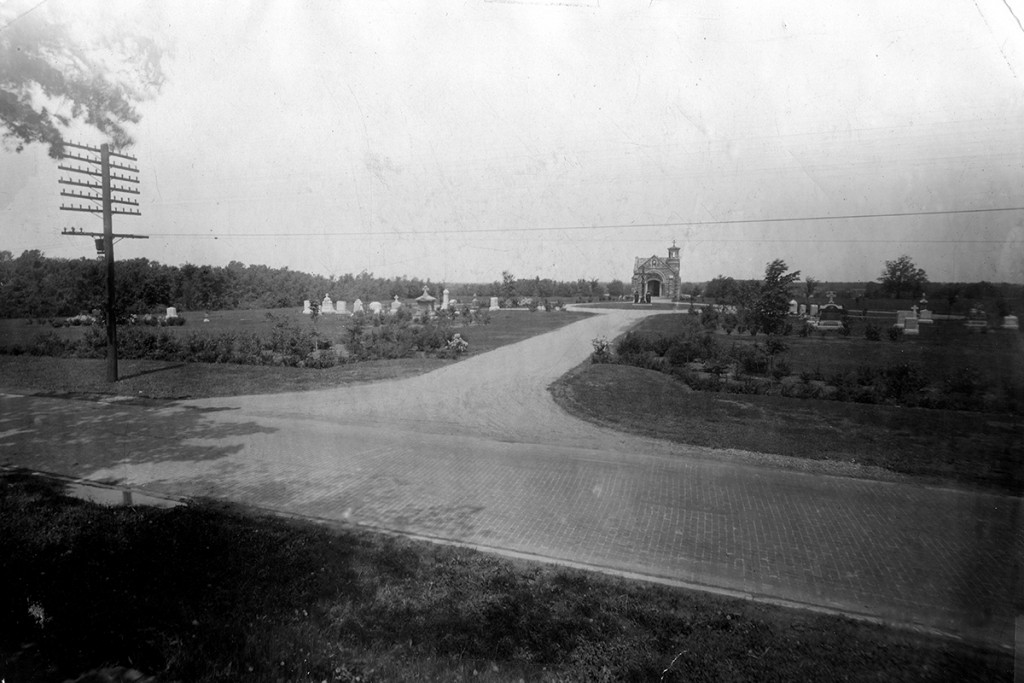 Located just east of the Village of Albion, St. Joseph’s Cemetery was established in 1920 under the pastorate and direction of Msgr. Francis Sullivan. Notice the paving stones covering East Avenue and the extensive landscaping of the property along the road. The center driveway runs north towards a circle containing four statues depicting the crucifixion of Christ and the chapel behind it. A larger pathway surrounded the chapel creating a section for burials within that loop.

St. Joseph’s Church celebrated its first Mass as a parish in 1852. For over twelve years prior, the Irish Catholic community relied on itinerant priests from Lockport to provide the sacraments throughout the year. This often meant that baptisms, marriages, and the sacrament of the Holy Eucharist would occur in bunches as a priest was made available by the Diocese of Buffalo.

The earliest Irish Catholics engaged in manual labor often in the sandstone quarries scattered along the Erie Canal, which led to accidental deaths and the contraction of tuberculosis. Even though the congregation established itself in the 1850s, there was still a matter of burials for parishioners. The lack of a dedicated cemetery was cause for concern among the early Catholics, but Mt. Albion was undoubtedly a sufficient alternative as there was little room for choice.

In 1873 under the direction of Rev. John Marius Castaldi the Catholics purchased a tract of land on Brown Road in the Town of Gaines for use as a parish cemetery. Upon its opening, many families elected to remove their loved ones to the newly established cemetery. Commonly referred to as “Holy Cross” or the “Old St. Joseph’s Cemetery,” the official cemetery ledger refers to the cemetery as “Holy Sepulchre” and served the congregation for nearly fifty years.

When property was purchased for the new cemetery, a new chapel was to be erected on site. Under the direction of parishioner Pasquale DiLaura, the Romanesque Revival chapel was constructed of Medina Sandstone at a cost of $10,000. The roof was covered with terracotta tiles and the vault inside could hold approximately fifteen bodies during the winter months. The beautiful stained glass windows were manufactured by the Frohe Art Glass Company of Buffalo under the direction of Leo P. Frohe. The windows were some of the last created under his supervision before his death in 1919.

The opening of the new location provided Catholics with a cemetery along one of the main thoroughfares into Albion, rivaling the location of Mt. Albion Cemetery. Established families were encouraged to purchase new lots in the new cemetery and provided with credits and buy-backs for unfilled lots at the old cemetery. The parish sold off adjacent land at the old location and reinterred numerous bodies between 1920 and 1925, essentially ending the sale of any new plots on Brown Road. Families who wished for the old cemetery to serve as their final resting place were offered vacated or unfilled plots at resale.

This photograph, taken June 15, 1923, shows the cemetery at an early stage of development. Many of the gravestones shown in the image are from families who elected to have their loved ones reinterred at the new location. A large granite stone, front right, marks the gravesite of John Cunneen, local attorney and one-term New York State Attorney General.