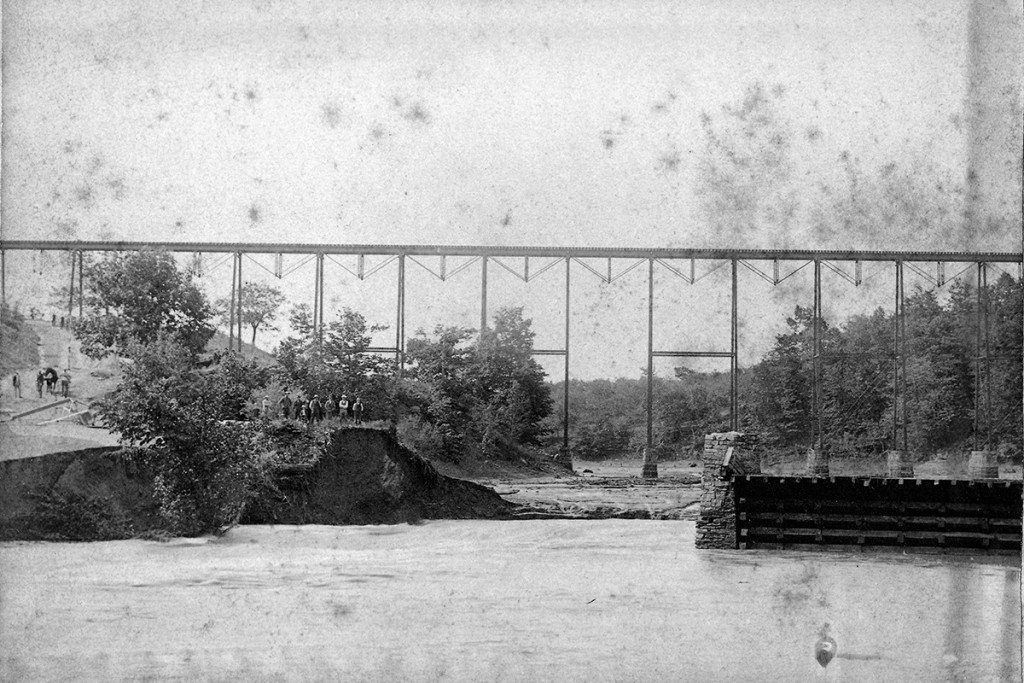 Constructed in 1876, the Rome, Watertown, and Ogdensburg trestle over Oak Orchard Creek provided a crossing point for the rail system in its earliest years. This particular image shows the first trestle constructed on that site in Waterport using lightweight iron trusses and planks. As the railroad grew, a new bridge was constructed in 1892 to facilitate increased traffic.

The RW&O Railroad was first established in 1842 with the purpose of linking Watertown and Rome. As the years progressed, the rail system merged with various lines throughout New York to produce a somewhat successful system of transportation along the southern shore of Lake Ontario. Although the line was popular amongst excursionists the railroad developed a reputation as a poorly maintained rail system, earning the eloquent nickname “Rotten Wood & Old Rusty Rails.” The railroad later earned the nickname “Hojack.”

The source of the name “Hojack” is unknown, but the most common origin story describes a farmer riding in a buckboard drawn by a stubborn, bulky mule. While crossing the tracks of the RW&O, the mule decided he would rest much to the dismay of the farmer. As a train barreled full speed towards the wagon, the farmer flew into a frenzy shouting, “Ho-Jack, Ho-Jack!” The train operators found such humor in the incident that they began calling the line the “Ho-Jack”; perhaps more folklore than truth.

Another story associated with the RW&O involved the construction of the trestle at Waterport. It is said that the first train to cross the newly constructed bridge was operated by Eunice Ross. Mrs. Ross lived near the construction site with her husband John, who was a miller at the nearby flour mill. Eunice agreed to board the construction crew in exchange for a small favor; the opportunity to pilot the train across the trestle, once completed.

On a small side-note, John and Eunice Ross cared for William Lake who was abandoned by his mother as a young child. Lake was later convicted in the heinous murder of Emma Louise Hunt in 1894.