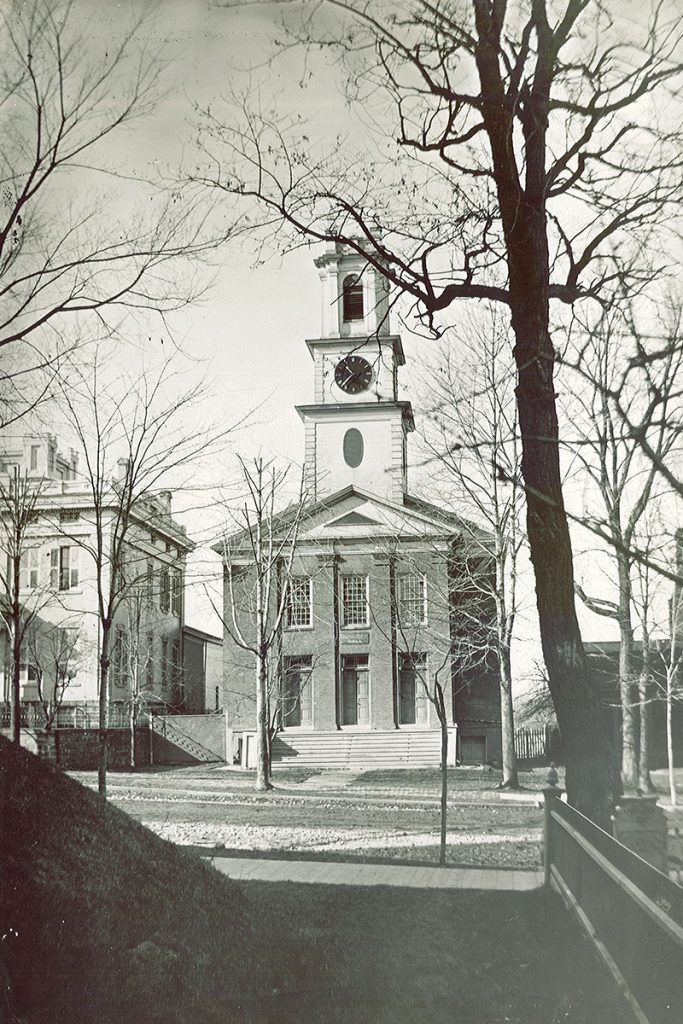 Over two hundred years ago as the pioneer settlers first established themselves in the wilderness that was once Genesee County, education and religion became fundamental pieces in daily life. It’s no surprise that the first church constructed in this region was situated along the heavily traveled Ridge Road in the town of Gaines. A partnership between Baptists and Congregationalists led to the erection of a church edifice to the west of the old Gaines Road.

Upon the opening of the Erie Canal, traffic, industry, and eventually wealth transitioned southward into the Village of Albion and of course so did the demand for schools and churches. The Baptists, once practicing their faith in their shared sanctuary at Gaines, pushed to split the congregation in order to establish themselves within the village. With pressure from many prominent citizens, the First Baptist Church of Albion was organized on April 17, 1830 at the Court House; Phineas Briggs and Barnuel Farr were selected as deacons.

After the succession of Rev. Hervey Blood to the pastorate of the congregation at Gaines, the Rev. Arab Irons was petitioned to serve in Albion as the first pastor of the newly formed congregation. With no place to meet, the churchgoers worshiped in the Court House for nearly two years before the group was able to purchase a parcel of land on North Main Street from Sydney Barrell at a cost of $400.

In 1832, the beautiful edifice pictured here was built adjacent to the Burrows Mansion (the old Swan Library) at a cost of $7,000. Constructed in the Federal style, the building is representative of an iconic architectural style that places emphasis on balance, symmetry, and elegance. For nearly 28 years the structure served the faithful worshippers until the congregation outgrew its physical space.

Under the pastorate of Rev. Almond C. Barrell the congregation purchased a lot on the corner of Liberty and West Park Street from the Presbyterian Church and erected a new building at the cost of $22,107 in 1860; approximately $588,000 today. Upon relocation of the congregation, the old church was transferred to Roswell S. Burrows who used the space as a concert hall. The building continued to serve in that capacity until it was left vacant and razed in the early 1890s.

The “Concert Hall Lot,” as it was called, remained under the ownership of the Burrows Estate until the remaining real property was liquidated in 1906. The Albion Lodge Independent Order of Odd Fellows purchased the lot and constructed a meeting house, which remains today with some additions and modifications added over the last 109 years.