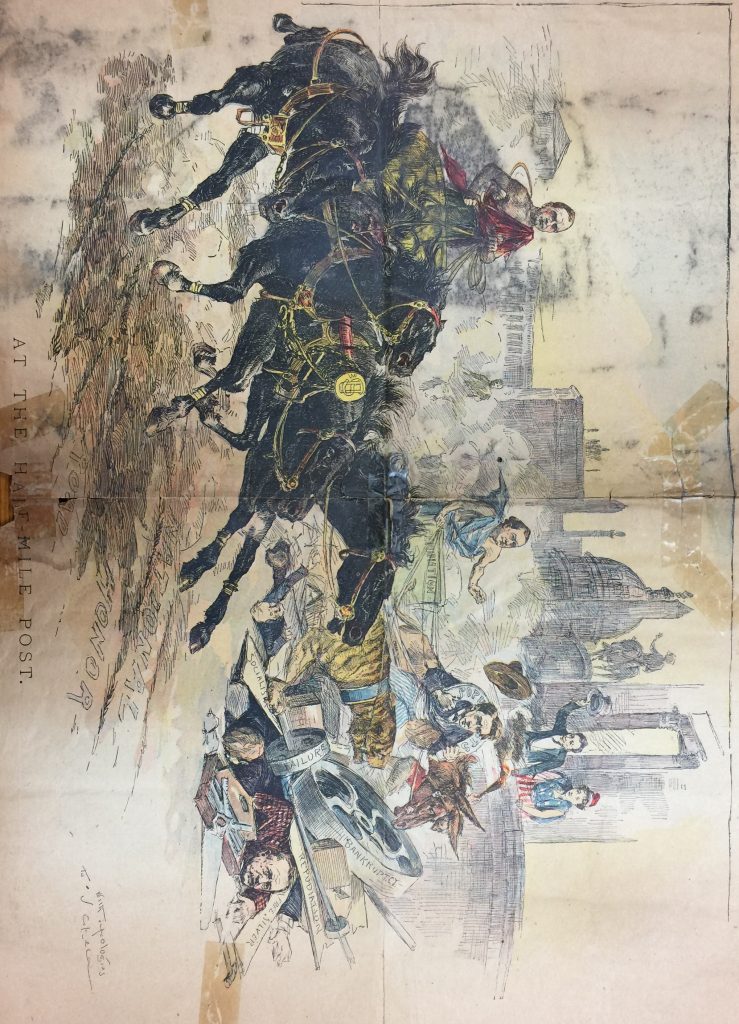 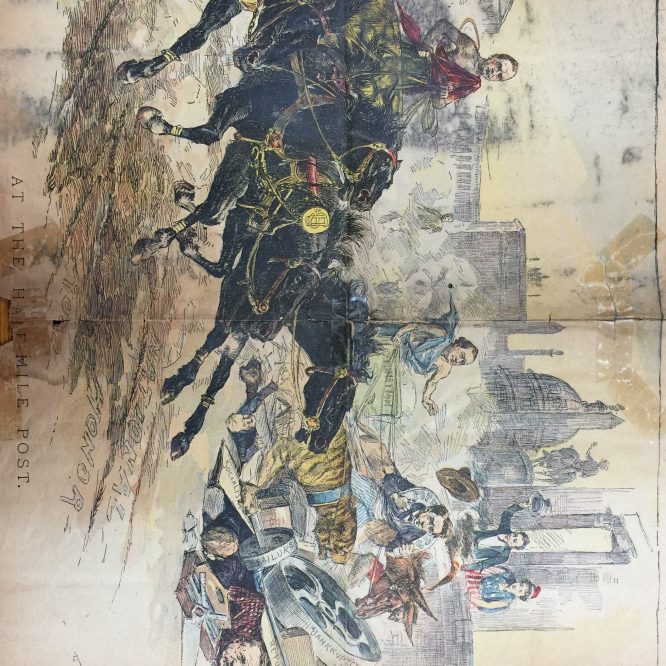 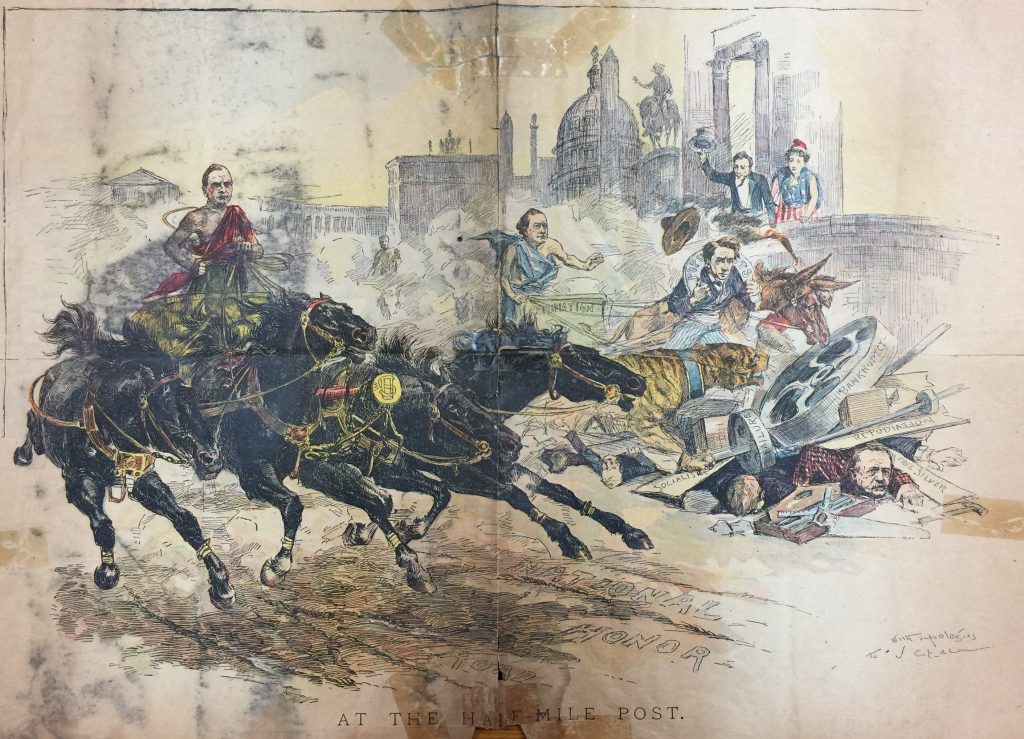 120 years ago, on November 3, 1896, Republican candidate William McKinley defeated Democrat William Jennings Bryan as President of the United States during a period known at the Fourth Party System. The United States was amidst an economic depression with origins in the Panic of 1893. President Grover Cleveland’s efforts to deal with this crisis led many Americans to withdraw funds from banks and investors across the globe sold stocks in favor of investing in gold-backed funds. Questions surrounding low prices, low profits, high unemployment rates, and ongoing labor strikes plagued the part platforms. Most important to the outcome of the election was Bryan’s support of a currency backed by gold and silver in an effort to push for inflation to reestablish a declining economy.

In this political cartoon published on the front page of the New York Herald, September 6, 1896, we see a stoic William McKinley atop a chariot drawn by a team of horses. The “$” on the horse bridle represents the massive campaign budget of over $3.5 million made accessible to McKinley under Mark Hanna, a wealthy political supporter and campaign manager. The poised McKinley is running the race with relative ease, no obstructions, and a strong, energetic, and powerful team of horses.

On the opposite side, Bryan rides in a chariot of “repudiation”; the Bryan campaign outwardly rejected the policies set forth by Democrat President Grover Cleveland, policies put in place to deal with the economic crisis. The chariot appears to be drawn by a rag-tag team of beasts, a winded horse, and the distraught-looking Populist Vice President candidate Thomas E. Watson, who appears to be “losing his hat” in the race. The tiger, pulling the chariot as well, is a representation of the Tammany Hall political machine reminiscent of old Harper’s Weekly representations. Tammany supported the gold standard, but was expected to support the leading Democrat candidate in the election. Here we see the tiger turning on its own team, showing that the New York City machine failed to fully support the efforts of Bryan in his campaign.

Trapped under Bryan’s wreck of a race is Theodore Roosevelt who was paid by Mark Hanna to speak on behalf of the Republican Party, portraying Bryan as a dangerous up-and-coming radical. The continued threats of socialism, free silver, and bankruptcy were seen as blocking the campaign’s success. We see Uncle Sam and Lady Liberty watching the race, although Lady Liberty appears troubled while Uncle Sam enjoys the contest.

The politics of the election boiled down to class conflict; McKinley won the support of skilled factory workers, railroad workers, and large farmers. Bryan’s rhetoric appealed to smaller farmers who were praised in his famous “Cross of Gold” speech: “Burn down your cities and leave our farms, and your cities will spring up again as if by magic; but destroy our farms and the grass will grow in the streets of every city in the country.” Still, German immigrants feared the possibility of prohibition looming overhead and Irish Catholics despised his revival-style rhetoric.

In the summer of 1896, a local “McKinley League” was formed at Albion under the leadership of John H. Denio, Charles D. Ross, Lyman Linson, and Gurdon Fitch. Local artists and painters, such as Seymour Olmstead of Albion, offered canvas squares with the portrait of a particular candidate for use with campaign club banners at a cost of $1.50. When election results poured out of the newspapers for public consumption on November 4th, McKinley’s 4,762 votes to Bryan’s 2,966 earned him the support of Orleans County.